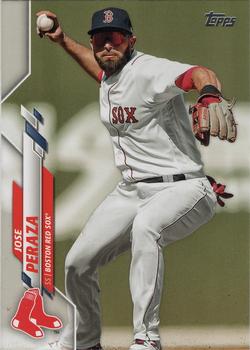 It was a long wait between home openers at Fenway Park. The start of the 2020 season was delayed until late July due to the worldwide COVID-19 pandemic. It had been 298 days since the Red Sox had played any game at home, with the last one before this day’s game a 5-4 win against the Baltimore Orioles on September 29, 2019. Since their home opener on April 9, 2019, it had been 471 days. It was the first game back after a long wait.

Indeed, because all professional sports had been suspended in March, it was the first “regular season” game for any of Boston’s sports teams since March 10, when both hockey’s Bruins and basketball’s Celtics had won games. Very little was regular about the 2020 season.

The Boston Globe’s Dan Shaughnessy called it “the most unusual sporting event in our city’s history.”1

The paid attendance for the game was 0. Across all of baseball, the unprecedented season began with no fans permitted in any major-league ballpark due to protocols adopted to reduce transmission of the virus still raging across most of the country. No scalpers sold tickets outside Fenway Park. Some fans lingered outside the ballpark to get the feeling of being close to the action – and maybe catch a ball hit over the Green Monster in left field onto Lansdowne Street.

The game was televised, but the Red Sox broadcasters operated remotely from the flagship NESN offices in Watertown, Massachusetts. Analyst Jerry Remy said it was his 33rd Opening Day as a TV broadcaster.

Ceremonies before the game saw both the visiting Orioles and the Red Sox honor the Black Lives Matter movement. A black unity ribbon was held by all as the two teams lined up on the baselines. Three sections of the bleachers were covered with a large Black Lives Matter banner that was 120 feet long and 20 feet tall.2

Nathan Eovaldi started the game for the Red Sox. His very first pitch, a strike, was measured at 100 mph. The first Orioles batter, center fielder Austin Hays, hit a later pitch toward the Red Sox bullpen in right field. It was caught by Kevin Pillar, who leapt and snared the ball, and then banged hard into the padding on the pen.

Prerecorded applause from speakers placed around the park could be heard both there and on the broadcasts. There were cardboard cutouts of people in the seats atop the Green Monster, depicting people who had donated to the Red Sox Foundation.

Tommy Milone, signed as a free agent in February 2020 after a season in Seattle, made his first major-league start as an Oriole.3 After two scoreless innings from both starters, Eovaldi took the mound in the top of the third wearing a shirt with the uniform number 7, instead of his usual 17. Because catcher Christian Vazquez wears 7, the Sox had a battery of number 7 pitching to number 7.4

The first scoring occurred in bottom of the third. The Red Sox hit four doubles, every one of them going into the field’s left-field corner. The doubles drove in four runs, one of them Rafael Devers, who had walked in the midst of all the doubling. Jackie Bradley Jr., Jose Peraza, J.D. Martinez, and Kevin Pillar each had a two-base hit. Milone departed after three innings; he had struck out five Red Sox but walked three.

The Red Sox added six runs in the bottom of the fourth to make it 10-0. Reliever Cody Carroll allowed each of the first four batters he faced to reach base, walking Andrew Benintendi with the bases loaded to force in another run. With the score 5-0, Travis Lakins came on to relieve Carroll and was greeted by J.D. Martinez’s a ground-rule double to right field for two RBIs. After getting Devers to ground out, Lakins saw three Red Sox each single (to center, right, and left): Xander Bogaerts, Kevin Pillar, and Christian Vazquez.

The Orioles scored one run in the top of the sixth when Renato Nunez doubled down the left-field line, driving in right fielder Anthony Santander, who had doubled to center. Santander had “an accelerated run-up to the season because of a positive COVID-19 diagnosis that kept him away from the team.”5 He scored the first run of the season for Baltimore.

The Red Sox responded with three more runs in the bottom of the inning, driving the score to 13-1. Jackie Bradley Jr. hit a two-run double to left, and José Peraza then doubled to left, scoring Bradley. Eovaldi departed after six innings after allowing five hits and the one run. He walked one and struck out four.

The only other run scored in the game came on a solo home run into the Red Sox bullpen by Orioles third baseman Rio Ruiz off Austin Brice in the top of the seventh.

No Oriole had more than one hit, with Nunez and Ruiz each having the one RBI. For the Red Sox, who accumulated 17 hits (and left 10 on base), both J.D. Martinez and Pillar had three RBIs and both Bradley and Peraza had two. Peraza was 4-for-5, Jackie Bradley Jr. was 3-for-4, and Martinez and Pillar were 3-for-5.

Only once before had the Red Sox scored as many runs in an Opening Day game: a 15-5 win over the New York Yankees in 1973. The 11-run margin of victory for this 2020 game stood as the largest on Opening Day in team history, surpassing 10-run margins against the Yankees in 1919 and 1973. The Orioles team was a younger one, dating to 1954, when they moved from St. Louis. They had suffered a more lopsided Opening Day loss in 1988: a 12-0 defeat by the Milwaukee Brewers. The 13 runs they allowed against Boston were the most scored against them in an opener.

Though a number of new players made their Red Sox debuts before the game was over, there was one element of continuity – six of the starting nine played the same positions they had played in each of the two prior seasons. They were Christian Vázquez (catcher), Xander Bogaerts (shortstop), Rafael Devers (third base), Andrew Benintendi (left field), Jackie Bradley Jr. in center field, and J.D. Martinez (designated hitter).6

Two of the other three starting players were making their Red Sox debuts, and both were impressive – second baseman Jose Peraza was 4-for-5 and Kevin Pillar was 3-for-5.

Others debuting for the Red Sox were (as manager) Ron Roenicke and pitchers Austin Brice and Phillips Valdez, catcher Jonathan Lucroy, and infielder Jonathan Arauz. For Arauz, it was his major-league debut. In Brice’s case, he was the first player born in China (Hong Kong) to play for the Red Sox.

Debuting for the Orioles were Milone and fellow pitcher Travis Lakins, three who played shortstop: Jose Iglesias, Pat Valaika, and Andrew Velasquez, outfielder DJ Stewart, and catcher Chance Sisco. Lakins and Iglesias had played for Boston earlier in their careers. Some of the others had played elsewhere as well.

After the game, second-year Orioles manager Brandon Hyde said, “I’d like to flush this one. Our guys are going to stay positive, turn the page and come out hopefully for a better result tomorrow.”7

The Orioles did get better results in both of the games that followed.

When the 2020 regular season ended, the Red Sox were in last place in the AL East, 16 games behind first-place Tampa Bay. The Orioles finished a game ahead of Boston and 15 games behind the Rays.

2 Similar demonstrations of support for Black Lives Matter were held across baseball.

3 Milone was 1-4 for the Orioles in 2020 and was traded to the Atlanta Braves on August 30. He appeared in three games for the Braves without a decision.

6 “Red Sox Notes,” July 24, 2020. The only time this had previously occurred in team history had been in the seasons 1902-05. “Red Sox Notes” is distributed by the Red Sox Media Relations Department.