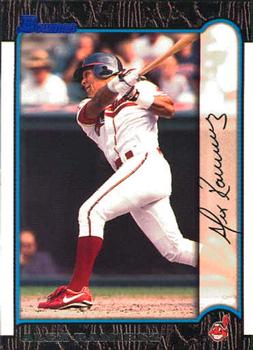 It started as an ordinary Thursday evening game in Cleveland. It didn’t stay ordinary for very long.

The visiting Toronto Blue Jays had won the previous night’s game, 4-3, when Manny Ramírez grounded into a bases-loaded, one-out double play in the bottom of the ninth. But today was a new day with another chance for Indians fans to cheer their division-leading team (at 58-36, the Indians were 12 games up on the White Sox in the AL Central). The Blue Jays were third in the AL East, six games back of the Yankees.

Charles Nagy (11-5, 4.60 ERA) seemed to be off to an uneventful start when Shannon Stewart flied out on the second pitch. Willie Greene and Shawn Green grounded out on the first pitches they saw, ending Nagy’s first inning after four pitches.

But Stewart had flied out to Manny Ramírez in right … which, according to the lineup card in Jays manager Jim Fregosi’s hand, should have been occupied by Álex Ramírez, not Manny Ramírez. Manny’s name was on the card — but as the designated hitter.

Before the bottom of the first could get underway, Fregosi popped out of the dugout and headed to home-plate umpire Rocky Roe, lineup card in hand. Serious conferring among the umpires ensued for several minutes, resulting in a rare event: With a confused and restless crowd in the background, Fregosi came back out of the dugout to break up the umpires’ conference, trying to get the game restarted since his pitcher was warm and ready to go.

The umpires explained their decision to both managers. Once Nagy pitched with Manny in right, the Indians had burned their designated hitter, so Nagy had to bat. Oh, and Álex was out of the game since he had been listed on the lineup card as playing right field. So Mike Hargrove was stuck with a lifetime 1-for-14 pitcher in his lineup instead of Álex’s solid .261 average. (Nagy’s one hit was two years earlier. Technically Nagy did have another hit as a major leaguer — in the 1992 All-Star game when AL manager Tom Kelly ran out of hitters. Batting with a borrowed helmet, he hit the ball, closed his eyes and ran.1)

So how did the mix-up occur? Anyone knowing Manny’s reputation for “Manny-being-Manny” might assume that he was the responsible party and had read the lineup card incorrectly before heading out to the field. Yes, Manny was the cause, but indirectly. He originally had been scheduled to DH, but went to Hargrove and said he wanted to play. Hargrove agreed.

The best way to explain how Manny’s request led to a real-life episode of Knotty Problems of Baseball2 is in Mike Hargrove’s own words:

“I ripped up the first lineup card and then told [third-base coach] Jeff Newman I had to switch the Ramirezes,” Hargrove explained after the game. “Then I went in and made out a new card. Jeff went to [first-base coach] Brian Graham and said the card had to be changed. So when Brian saw the card on his desk, he didn’t know it was a new card and [he] changed it — back to the wrong one.” Since Hargrove did not take the lineup card out to the umpire, the last chance to correct the error passed unnoticed.

It took nearly 10 minutes to get everything straightened out on the field, in the dugouts, and on everyone’s copies of the lineup cards.3 Once David Wells (10-6, 4.85 ERA) finally got to pitch in the bottom of inning, he allowed one-out singles to Omar Vizquel and Roberto Alomar. He got Manny to ground out and struck out Richie Sexson to strand them, keeping the Indians off the board.

The Blue Jays got to Nagy in the second. Carlos Delgado singled. Tony Fernández grounded toward first, but Jim Thome lost the ball in the glare of the setting sun; instead of a double play, both Blue Jays were safe. Darrin Fletcher doubled, scoring Delgado. Fernández scored on Tony Batista’s groundout. Fletcher held at third on José Cruz’s groundout but came home on Homer Bush’s single. Stewart grounded out, finally ending the inning, but the Jays led, 3-0.

The crowd didn’t know the details of the mix-up, but they knew they were seeing something rare. They cheered each time Nagy fouled off one of Wells’s offerings or took a ball. After Nagy fouled off three fastballs, Wells finally resorted to a cutter to strike him out. Nagy returned to the dugout to cheers from the fans. Wells allowed a single to Enrique Wilson but nothing else.

Nagy seemed to recover his form after his trip to the plate: He induced three groundouts in the top of the third. Wells was almost as efficient in the bottom of the third, allowing only a walk.

Nagy allowed one hit in the top of the fourth, a two-out double to Batista. Wells also allowed only one hit in the bottom of the fourth, but it was a first-pitch home run by Sexson, putting the Indians on the board. Thome walked, bringing Nagy back to the plate. Alas, he popped up a foul bunt, slamming his bat on the plate in frustration.5 A strikeout and a fly out ended the inning, but at least the home team wouldn’t be shut out with the score 3-1, Jays.

Nagy worked a one-two-three top of the fifth.

The Indians drew closer in the home half of the fifth. Vizquel worked a one-out walk and stole second, putting him in position to score on Alomar’s single to center. That was all, though: Manny and Sexson struck out, but the Indians were within one, 3-2.

The Jays got that run back in the top of the sixth. Green doubled to left, advanced to third on Fernández’s one-out single, and scored on Fletcher’s sacrifice fly. Batista grounded out to end the inning.

Paul Spoljaric took over the pitching for the Jays in the bottom of the sixth. Wells had thrown 95 pitches and was in line for the win, but had to leave the game because his cup had pinched him in a sensitive area and he needed to apply ice.6

Thome opened with a double and scored on Einar Díaz’s two-out double. The Indians were back within one, 4-3. Looking for some offense, Hargrove had sent up John McDonald as a pinch-hitter for Nagy, even though he’d thrown only 85 pitches. McDonald struck out.

Rincón continued his effective relief outing with a one-two-three top of the eighth. When Quantrill allowed a leadoff single to Sexson in the bottom of the frame, Fregosi replaced him with Graeme Lloyd. Lloyd allowed a single, but erased the runner with a double play.

Paul Shuey pitched the top of the ninth, allowing only a walk to Batista. Down only one run, the Indians had a pinch-hitter and the top of the order coming up in the bottom of the ninth. The fans went home disappointed, though: Pinch-hitter Jacob Cruz and Lofton struck out and Vizquel grounded to short. The final score was 4-3, Blue Jays, the same score as the loss the previous night. Given the close score, the loss of the DH may have contributed to the loss of the game: The Indians had more hits (10) than the Blue Jays (seven), but the Indians left three more men on base.

The fans were able to witness an unusual event: an American League pitcher battling at the plate in an American League park. They wouldn’t hear the lineup mix-up explanation until after the game,7 although it was obvious that somehow the Indians had to play by National League rules once Nagy appeared in the on-deck circle.

Cleveland won its division but lost to the Red Sox in the Division Series. The Blue Jays finished with a winning record of 84-78, but that was only good enough for third in the AL East.

As for Manny, the cause of all this confusion? Although he finished this game 0-for-4, he was an All-Star, and led the league in RBIs, Slugging Percentage, OPS, and OPS+.

2 “Knotty Problems of Baseball” was a series of books published by The Sporting News through much of the twentieth century.

6 Malony. Anyone who has read Wells’s bio realizes that this is exactly the type of weird event that would happen to him.