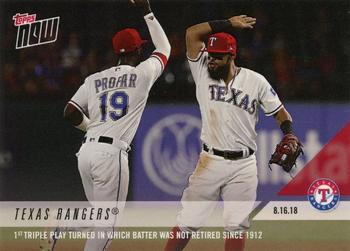 The 18,398 fans who braved the 97-degree Texas heat to see their last-place team play the next-to-last place team could at least leave with bragging rights. The game included a play that hadn’t occurred since 1912.

To say that the scheduled pitchers for the August 16, 2018, game were young and inexperienced states the obvious. Ariel Jurado (2-2, 5.66 ERA), taking the mound for the Rangers (53-69, fifth in the American League West), was pitching the fifth game of his major-league career. The Angels (62-60, fourth in the AL West) planned a bullpen game. Six of their eight pitchers to appear in the game had fewer than 100 games under their belt – indeed, two of them debuted in this game.

The Angels hit the ground running. Kole Calhoun, David Fletcher, Justin Upton, Shohei Ohtani, and Albert Pujols hit consecutive singles to start the game. The score was 2-0, Angels, and the bases still loaded before Jurado could record an out. The first out was an Andrelton Simmons fly out; it was deep enough for a sacrifice fly, but the Angels held Upton at third. He (and Ohtani) scored on Francisco Arcia’s double down the left-field line.

With the score already 4-0 and a young pitcher on the mound, a visit from pitching coach Doug Brocail was in order. Perhaps it helped: Jurado dialed up a ground     ball out, but the Rangers couldn’t turn a double play so another run scored. Eric Young Jr., the ninth batter of the inning, hit a foul pop for the third out, leaving the score 5-0, Angels.

Taylor Cole (0-2, 2.95 ERA, 11th game) was the first pitcher up for the Angels. He issued a two-out walk to Elvis Andrus and allowed a homer to Nomar Mazara, so the lead was cut to three. Mazara was returning to the lineup after a month on the disabled list  with an injured thumb,1 but he certainly didn’t look rusty.2

Jurado seemed to settle down in the second inning. He allowed a leadoff homer to Calhoun, pushing the Angels’ lead to 6-2, but collected two strikeouts.

The Rangers got that run back in the bottom of the second. Joey Gallo hit a broken-bat leadoff homer into the first row of the stands. When Cole followed with back-to-back walks of Robinson Chirinos and Ronald Guzmán, Angels manager Mike Scioscia called on José Álvarez. Álvarez had pitched an inning the night before against the Padres and had been credited with the win. Delino DeShields bunted the runners over, but a comebacker and a called strike three on Rougned Odor held the score at 6-3.

Jurado pitched a clean top of the third.

Williams Jerez, also pitching in his fifth game, was next out of the Angels’ bullpen. He should have started with a fly out but Upton let the ball bounce off his glove (and then his body) for an error. The crowd got excited when Mazara hit one to deep center, but it was just a long fly out. Andrus was erased in a rundown trying to steal second so he wasn’t on base to score on Jurickson Profar’s single. Gallo looked at strike three, earning Jerez his second hold.

The Angels appeared to be headed for another big inning in the fourth. Taylor Ward walked. Young flared a single to left. Calhoun singled, loading the bases with no outs.

Fletcher hit a low line drive up the third-base line. The ball hit the ground a foot or so in front of Profar’s glove. The runners headed back to their bases in apparent belief that it was a lineout.

Profar, knowing that the ball was still live, stepped on third for the force on Young and tagged Ward as he slipped off third for the second out. He then threw to second baseman Odor, who tagged Calhoun halfway between first and second for the third out. Calhoun tried to evade the tag but would have been called out for running out of the baseline even without the tag.

Odor raised three fingers, yelled, “That’s three!” and headed to the dugout. The crowd, realizing what had just happened, stood and applauded. Scioscia stood on his dugout steps looking very perplexed. Once he got the explanation, he accepted it without a challenge. It was a play that hadn’t been seen since 1912: A triple play in which the batter was not retired.3

Noé Ramirez, the Angels’ fourth pitcher, had one baserunner in the bottom of the fourth when he hit Guzmán with a pitch, but that was all he allowed.

Jurado worked his second clean inning of the game in the top of the fifth.

Ramirez pitched a second inning for the Angels, earning his sixth hold. He got a strikeout and two groundouts with the help of some sharp fielding by his infielders.

Jurado finished his outing with a one-two-three top of the sixth, including his third strikeout.

Jim Johnson, pitcher number five, was the elder statesman of the Angels bullpen. At 35, with 658 games behind him, he was six weeks from the end of his 13-year career. He allowed a leadoff home run to Profar, cutting the Angels’ lead to 6-4, but got the next three outs to earn his seventh hold.

The Rangers’ Matt Moore took over from Jurado in the top of the seventh. Young bunted for a hit, reaching base successfully when Moore missed the throw to first. Calhoun grounded into a double play and Fletcher flied out, so Moore faced the minimum.

Ty Buttrey made his major-league debut, pitching the bottom of the seventh. His nervous and excited parents were pacing in the stands. DeShields tried to bunt, but had one finger too far forward on the bat, so the ball hit his finger. He didn’t leave the game: He got a new batting glove (without a bloodstain) and stayed in to the cheers of the crowd.4 Buttrey got his first major-league out when DeShields grounded back to the mound. Shin-Soo Choo doubled off the wall in left, but Odor and Andrus grounded out, so Buttrey earned his first hold.5

Moore worked a second inning, needing only eight pitches for three outs in the top of the eighth.

The problem with a bullpen game is that sometimes the bullpen is like a box of chocolates: You don’t know what you’re getting until it’s too late. Justin Anderson was “pitcher number seven.” He had debuted earlier in 2018, pitching in 44 games to an ERA of 2.80 He had not allowed a baserunner in his previous five outings. For whatever reason, he could not find the strike zone against Texas; only 10 of his 29 pitches were strikes. He walked Mazara on four pitches and plunked Profar. Gallo doubled, scoring Mazara. Chirinos was another four-pitch walk to load the bases again. Anderson got two outs by striking out Guzmán and pinch-hitter Isiah Kiner-Falefa, but he walked Choo, forcing in a run to tie the game, 6-6.

The Angels’ Osmer Morales, making his major-league debut,6 was called on to wiggle out of the jam and face Odor. With runners everywhere, a groundball could keep the game tied. Morales got the groundball, but it came close enough to him that he deflected it slightly so the throw to first was not in time and a run scored. The runner was originally called out, but the call was overturned on review. One more run scored on a wild pitch: The ball deflected back toward the infield, Morales grabbed it and tried to tag Chirinos, but he avoided the tag. Andrus lined out to end the inning, but the Rangers led, 8-6.

José Leclerc, who had recently started closing for the Rangers, allowed a leadoff double to Simmons, but got a popout and two strikeouts to seal the win and earn his third save. Because Moore was the pitcher of record when Texas took the lead, he picked up his second victory of the season. Anderson was (deservedly) charged with the loss.

The fortunes of the two teams did not change between this game and season’s end. They finished fourth and fifth in the AL West,7 but at least made some history in the process.

In addition to Baseball Reference, Retrosheet, and the sources cited in the Notes, the author reviewed the broadcast on YouTube.

2 He went 6-for-20 in his minor-league rehab assignment, with no extra-base hits.

4 He was removed in the eighth inning, and was out of the lineup for two weeks. That’s not the way he wanted to spend his 26th birthday.

6 This was his only game in 2018, and he did not play in the majors in 2019 or 2020. Oddly enough, Baseball Reference credited him with .1 WAR for this single appearance.