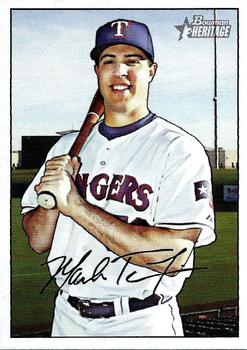 On August 17, 2004, switch-hitter Mark Teixeira “returned to the form that won him American League player of the month honors in July,”1 with a career-high seven-RBI performance that culminated in hitting for the cycle. Playing in only his second season in the majors, Teixeira led the Texas Rangers as they blasted the Cleveland Indians, 16-4, in the second of a three-game series.

The Rangers had finished the first half of the 2004 season with a record of 49-37, giving them a two-game lead in the American League’s West Division. However, since the All-Star break, a span of 31 games, Texas was batting just .222 as a team, although the Rangers won 16 of those 31 contests. That left them a half-game out of first place. Meanwhile, the Indians were climbing in the Central Division. Since the All-Star break, manager Eric Wedge’s team had won 21 of 33 games, to move within 2½ games of the Minnesota Twins.

Veteran right-hander Scott Erickson got the starting nod for Texas. He had been recently plagued by injury, missing all of 2001 and 2003. The New York Mets signed him before the 2004 season, but then they traded him to the Rangers on July 31 for a “player to be named later.”2 Erickson was making his third start for Texas, trying to notch his first victory in two years.3 Cliff Lee was called on to pitch for the Indians. The southpaw was in his first full season in the big leagues.4 He was making his 25th start of the season, in search of his 11th win of the year.

The game-time temperature in Texas was 87 degrees, despite the evening start. A good crowd (24,864) came to watch the action at Ameriquest Field (The Ballpark in Arlington).

After a one-two-three first, Erickson ran into trouble in the second inning. Casey Blake stroked a one-out double. Ben Broussard and Ronnie Belliard each walked, and Cleveland had the bases loaded. Jody Gerut swung at the first pitch to him and sent it to center, deep enough for a sacrifice fly (Blake scored).

In the home half, Kevin Mench and Brian Jordan laced back-to-back singles to open the inning. Hank Blalock walked, and the Rangers also had the bases loaded. Gary Matthews’s sacrifice fly to deep left brought home Mench, and the other runners advanced as well. This meant that Gerald Laird’s fly out to left brought Jordan home, giving Texas a 2-1 lead.

Cleveland put two runners on base in the third but could not bring them home. In the fourth, the Indians wasted a two-out triple by Gerut.

The Rangers took advantage of Lee’s wildness. Michael Young drew a walk to lead off the third inning and then Lee plunked Alfonso Soriano. Teixeira, who had struck out in the first inning, lined a double to deep center, and both baserunners scored. Lee retired the next two batters, but Blalock then doubled, driving in Teixeira, and the score became 5-1. In the fourth Laird led off with a walk and moved to second on a wild pitch. After Eric Young flied out, Michael Young singled, putting runners at the corners. Soriano singled to left field. Laird scored and Lee was sent to the showers. Rick White came on in relief.

The first batter White faced was Teixeira. Now batting from the left side, he launched a three-run homer to dead center field, blowing open the game for Texas. It was his 29th home run of the season. His teammates continued the attack. Mench doubled and an out later Blalock walked (his second free pass of the game). Matthews then blasted a White pitch well beyond the fence in deep center for a three-run home run (his 10th). In this inning alone, Texas had added seven runs (on only five hits) to its score, making it 12-1.

Erickson threw just eight pitches in the fifth, getting three groundouts, before his offense took over again. White retired Eric Young, but then he allowed back-to-back singles to Michael Young and Soriano. Teixeira drove the ball on a line into right field, good for a two-run standup triple. Mench then hit his 17th home run into the left-field seats. White was charged with eight runs on seven hits (he allowed two inherited runners to score as well), and to this point, he had retired only three Texas batters.5

Journeyman Doug Brocail came on in relief of Erickson to pitch the seventh. Cleveland managed one baserunner in each of the fifth and sixth innings, but neither scored. In the bottom of the seventh, Teixeira led off, now facing Cliff Bartosh, who had replaced White an inning earlier. Teixeira delivered a solid line drive up the middle for a single. He had become just the second Ranger to hit for the cycle, with his feat coming 19 seasons after Oddibe McDowell (July 23, 1985), who, incidentally, also hit for the cycle against the Cleveland Indians.

After the single, Teixeira stood on first base while fans gave him a standing ovation. The television announcers reported that there was “almost no reaction from Teixeira.”6 He then earned “a reprieve at first base from pinch-runner Rod Barajas.”7 As he came off the field, his teammates wanted to celebrate with high-fives and back slaps, but Teixeira said, “I was definitely happy and excited inside, but you never want to show up an opponent when you’re winning. Not many people [hit for the cycle]. People will probably forget about it in a couple of weeks. I’ll always have it, and I’ll always remember it.”8

The score remained 16-1 until the top of the ninth. The first three Cleveland hitters swung at Brocail’s first pitch; Belliard and Gerut each delivered doubles, but Coco Crisp grounded out to first. (Gerut advanced to third on the play.) Grady Sizemore worked a full count before grounding out to first as well, with Gerut scoring on the play. John McDonald doubled, and then Josh Phelps hit an RBI single to left. It was too little, too late, though. Tim Laker grounded a ball to the third baseman for the final out of the game. The final score was 16-4.

The Rangers won their fifth consecutive game, keeping them a half-game behind the Oakland A’s in the West. The offense had been in full gear. Together with the 16 runs scored, Texas banged out 17 hits and drew four walks. Michael Young was 3-for-3 with three runs scored. Soriano was 2-for-4 with three runs. Matthews drove in four runs and Mench was a triple shy of his own cycle. Erickson earned his first victory of the season, allowing only one run in six innings of work, and was grateful for the team’s run support: “There’s no better way to get your first win of the season than for a team that’s trying to get into the playoffs.”9

Teixeira collected two hits right-handed (double and single) and two hits left-handed (home run and triple). His seven runs batted in were a career high, and he scored three times. It was his first triple of the season. After the game he told reporters, “Triples are a weird thing, especially for a guy like me. You need some bounces, you need a big outfield.”10 He added, “I never dreamed of doing something like hitting for the cycle. This is definitely. … It ranks up there.”11

Rangers manager Buck Showalter was impressed with his 24-year-old first baseman, saying, “I’m a fan, and I usually have a pretty good seat to see it. Just to be there to see Mark accomplish that at a real young age, it’s fun to watch.”12 Incidentally, this was Showalter’s 700th win as a major-league manager.

Video highlights of the game can be found at mlb.com/video/teixeira-hits-for-cycle-c285860883.

2 The Mets received Josh Hoffpauir on September 17 as the player named later.

3 Erickson’s last victory before this game came on August 7, 2002, as the Orioles defeated the Twins.

5 White retired the next two batters he faced, but he did not come out of the dugout to pitch the sixth inning.

9 O’Brien, “Teixeira Puts Rangers Through the Win Cycle.” The Rangers finished third in the AL West.