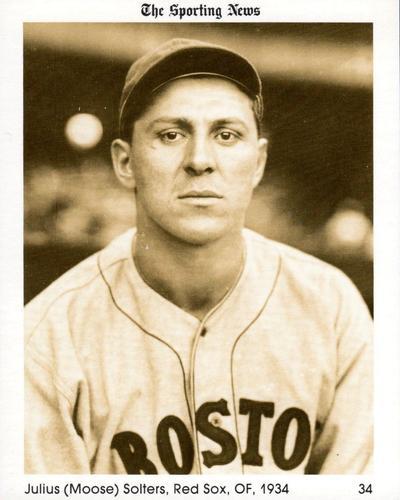 During a 1934 renovation, the ballpark’s capacity was increased from 24,000 to 37,500.3 (In 2017, the seating capacity for Fenway Park night games was 37,731.4) Part of the renovation included the installation of a hand-operated scoreboard that now showed the line score, as well as games in the American League (inning by inning) and National League (latest score) games.

The crowd anxiously awaited the league-leading Detroit Tigers, who were “racing towards Detroit’s first pennant since 1909, and their locally bred leader,”5Mickey Cochrane, the future Hall of Fame catcher, who was in his first year as Tigers manager.6 From 1925 until 1933, Cochrane and Lefty Grove were batterymates with the Philadelphia Athletics, and together they won three consecutive American League pennants (1929-1931) and the World Series in 1929 and 1930. Philadelphia owner-manager Connie Mack had to sell his star players in 1932 and 1933 “to pay the bills,”7 so on this day, Cochrane and Grove were opponents. Grove (6-4, 6.29 ERA) took the mound for Boston in the first game of a Sunday doubleheader, while Cochrane sent General Crowder to combat Boston. Crowder had been claimed on waivers by the Tigers from the Washington Senators two weeks earlier, despite his 4-10 record and 6.79 ERA. This was his third start for Detroit.

The first time Detroit faced Boston in 1934, the Red Sox set a major-league record by scoring 12 times in an inning (the bottom of the fourth) en route to a 14-4 victory on May 6. Rookie Moose Solters had his “first big game”8 for the Red Sox against the Tigers that day. Solters was Boston’s offensive hero on this day, as he became the fourth player in Red Sox history to hit for the cycle.

As many as 12,000 reserved seats had been sold up to three days before the game. On game day, the grandstand gates were closed by noon. Soon every seat in the park was filled and the outfield was roped off. The Boston Globe reported that by the time Grove threw his first pitch (1:30 P.M.), “every seat was filled and there were more than 5,000 standing in the outfield.”9 The Detroit Free Press told its readers that “every section of the stands was packed with excited humanity.”10

Detroit jumped on Grove in the first inning. Pete Fox doubled to center in his leadoff spot and scored when Jo-Jo White singled to right. White “reminded older fans of Ty Cobb, when he punted his way around the bases to give the Tigers their second run.”11 White was “out at second, third, and home, but scored anyway.”12 He attempted three straight steals, and although the throw beat him every time, he slid under shortstop Lyn Lary’s glove at second base, kicked the ball out of Billy Werber’s glove at third, and knocked the ball out of catcher Rick Ferrell’s hands at home. That was Werber’s 38th error of the season.

In the top of the fourth, Detroit struck again. Billy Rogell doubled to left and scored when Hank Greenberg hit a two-baser to right. In the home half, Solters doubled into the left-field corner. (He had popped out in the first inning.) Ferrell hit a ball to the pitcher, and Crowder had Solters caught in a rundown. Tigers shortstop Rogell threw the ball past third baseman Marv Owen and Solters slid into the bag. Crowder had backed up the play, picked up the ball and tagged Solters, but umpire Bill Summers ruled Solters safe. Cochrane “came flying out of the dugout like a skyrocket and exploded all around Summers after that, but the tomato-faced umpire buttoned up his chin and thrust his chest out four inches farther. So that was that.”13 Ferrell stayed at first. Solters then scored on Ed Morgan’s fly ball to center. Lary walked and Grove followed with his first double and fourth RBI of the season; the Tigers’ lead was trimmed to one run.

Grove was not helped by his team defensively. For example, in the fifth inning, “about every ball hit by the Tigers was good for a fluky single or double, and the visitors scored five runs.”14 Fox and White singled, Charlie Gehringer walked, and Rogell singled. Owen followed with a two-out double. According to the Globe, “after Owen’s pop fly to short right field dropped safe for a double, Grove tossed his glove in the air, apparently in disgust.”15 Evidently, right fielder Reynolds had fielded Owens’ hit and “threw the ball toward the Tigers bull pen.”16Hayworth entered the batter’s box and Grove threw a pitch close to Hayworth’s head that sailed over the catcher and allowed Owen to scamper to third. Hayworth then doubled to left, bringing in Owen with the frame’s fifth tally. Crowder grounded out to end the inning. Hank Johnson relieved Grove at the start of the sixth. He pitched an inning before 40-year-old Herb Pennock came in to pitch the last three innings.

Crowder, meanwhile, cruised through the game. Although Boston got hits in the fifth (a wasted triple by Solters), sixth, seventh (a double by Roy Johnson), and eighth (a Solters single) innings, no runs scored. In the bottom of the ninth, however, the Red Sox “attacked Pitcher Crowder for three hits, a base on balls and four runs.”17 Solters smacked a three-run home run, his seventh homer of the season, over the left-field wall, but it was not enough to defeat the Tigers, who won, 8-6.

With the four hits, Solters had hit for the cycle. He raised his batting average to .318 after the first game, and his slugging percentage shot up 26 points. He also extended his hitting streak to 12 games (but he went 0-for-4 in the second game). Roy Johnson had three hits in the losing cause, including two doubles. This gave him 40 two-baggers for the season. Five different Tigers batters had two hits each. There were nine doubles in the game.18 Crowder picked up his second victory since joining the Tigers.

The Tigers won Game Two as well, 4-3, sweeping the Red Sox despite Gehringer and Goose Goslin going hitless in the twin bill. Very few of the nearly 47,000 fans left before the final out, prompting Red Sox manager Bucky Harris to tell reporters, “This is truly a great baseball city.”19 Harris had managed the Tigers from 1929 through 1934. The Red Sox fell to fourth place in the American League, while Detroit kept its first-place lead over the Yankees at 4½ games.

In addition to the sources mentioned in the notes, the author consulted baseball-reference.com, mlb.com, retrosheet.org and sabr.org. The author sincerely thanks Ms. Lisa Tuite of the Boston Globe for providing newspaper accounts.

6 Cochrane grew up in Bridgewater, Massachusetts, and attended Boston University.