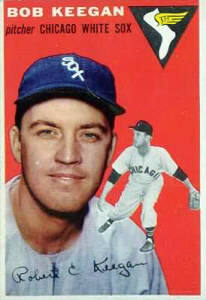 “It was a new pitching motion that did it for me,” explained Chicago White Sox right-hander Bob Keegan after tossing a no-hitter.1 Finally heeding the advice of skipper Al Lopez and pitching coach Ray Berres to slow down his preliminary motion before throwing the ball, Keegan baffled the Washington Senators, disrupting their timing and keeping them off balance.

Keegan’s gem was a much-needed salve to the second-place Pale Hose (69-47), who had lost 10 of their last 18 games heading into a Tuesday doubleheader to kick off a three-game series with the Senators. For most of the first three months of the season, the White Sox sat atop the AL, but their skid dropped them 7½ games behind the Yankees. The seventh-place Senators (45-72), heading to their 11th straight second-division finish, were playing their best ball of the season, having won 10 of their last 16 for skipper Cookie Lavagetto, who had replaced Chuck Dressen in early May.

A robust weekday crowd of 22,815 was on hand at Comiskey Park, located at the intersection of 35th and Shields on the South Side of the Windy City. In the first contest of the twin bill, the White Sox squandered an early 4-1 lead and lost it, 5-4, on Ed Fitz Gerald’s solo home run to lead off the eighth. Sportswriter Edward Prell of the Chicago Tribune declared that the spectators and the ChiSox themselves were “shocked by the loss,” leading to a hefty round of boos and catcalls.2

Tapped to stop the White Sox’ slump was the 36-year-old Keegan, described by Prell as on the “rugged edge of big leagues when the season started.”3 After debuting with the White Sox in 1953, Keegan won 16 and earned an All-Star berth the next season, his first full one in the big leagues. However, chronic arm miseries had wiped out much of the next two campaigns, with a combined 7-12 slate. The White Sox had actively shopped him in the offseason, but found no takers for an ailing starter in his mid-30s. Assigned to the scrap heap of long relief as the season commenced, Keegan moved back into the starting rotation and entered this game with a 7-6 record (37-32 lifetime). Toeing the rubber for the Senators was veteran southpaw Chuck Stobbs, who had blanked the Boston Red Sox on five hits in his last start to improve his slate to 6-15 and 82-98 in parts of 11 seasons.

The ChiSox squandered a first-inning scoring opportunity after loading the bases with one out when Nellie Fox was plunked, Minnie Minoso doubled, and Walt Dropo drew an intentional free pass. Stobbs fielded Larry Doby’s soft dribbler and fired to catcher Lou Berberet to erase Fox at the plate, and then retired Sherm Lollar.

The “gloom started lifting” among the Comsikey faithful, opined Prell, in the bottom of the third when the White Sox teed off on Stobbs.4 Luis Aparicio and Fox led off with singles and raced home on Minoso’s two-bagger. Dropo’s single accounted for another run, and then Doby cranked his 12th home run of the season, a two-run shot to make it 5-0.

The White Sox tacked on their sixth and final run in the fifth when Keegan singled, driving home Bubba Phillips, who had laced a one-out double.

Six runs were more than enough when Keegan flashed the game of his life. He set down the first 14 batters he faced. One of those outs was the only hard-hit ball of the game, a screeching liner by Herb Plews in the first inning. Center fielder Larry Doby raced and made a “back hand catch,” an athletic, yet for the seven-time All-Star, routine play.5 “I could tell then that the Senators didn’t have any hits in them,” Keegan said after the game.6 He was also convinced that his new motion gave him better control, put less pressure on his right wing, and kept him from fatiguing so quickly.

Relying mainly on his sinking fastball and an occasional slider, Keegan mowed the Senators down. With two outs in the fifth, he surrendered his first baserunner when he walked Berberet on a 3-and-2 count. Keegan issued his second and final free pass of the game in the next inning, sending Faye Throneberry, pinch-hitting for Stobbs, to first on a 3-and-1 count. The next batter, Eddie Yost, hit a hit tapper back to the mound, which resulted in an inning-ending 1-4-3 twin killing.

Keegan began the eighth having faced just one batter over the minimum and six outs away from becoming the first White Sox hurler to author a no-hitter since Bill Dietrich held the St. Louis Browns hitless on June 1, 1937. The last no-hitter at Comiskey Park occurred on Opening Day 1940 when Bob Feller threw the first of his three career no-nos. The next no-hitter by a White Sox hurler was on September 9, 1967, by Joe Horlen.

“[Keegan] had great control, great stuff,” gushed Lopez after the game, and that was readily apparent in the final two frames.7 He needed just two pitches to record the first two outs in the eighth. After Bob Usher attempted to bunt, eliciting a hefty round of boos from the fans, Keegan’s seventh pitch of the inning led to a weak grounder to short.

Lavagetto, a former four-time All-Star infielder with the Brooklyn Dodgers in his first season as a manager, was not about to make it easy on Keegan in the top of the ninth. He called on slugger Jim Lemon, who had missed the previous eight games, to pinch-hit for weak-hitting shortstop Rocky Bridges. Lemon grounded to short on the first pitch. Keegan then registered his first and only punchout of the game, fanning pinch-hitter Julio Becquer on four pitches. “Bob got Becquer on a slip pitch,” revealed All-Star batterymate Sherm Lollar.8 Keegan had picked up the pitch, sometimes called the palm ball or cosmic pitch by the club, from former skipper Paul Richards. On his second toss to Yost, Kegan induced a routine popup that first sacker Walt Dropo corralled in foul territory to preserve the no-hitter and conclude the game in 1 hour and 55 minutes.

The Comiskey crowd went wild and many stormed the field and mound. Keegan, mobbed by his teammates, as well, was finally escorted to the dugout and dressing room by police attempting to restore order.

Keegan was a model of efficiency, facing only 28 batters, and pitching to contact. “I’ll bet he didn’t throw more than 85 or 90 times,” exclaimed Lollar.9 The Senators pounded his sinkers and low sliders into the dirt all afternoon, resulting in 13 groundouts. The Pale House outfielders made just seven putouts in the game.

Keegan’s perch at the top of the baseball world did not last long. In fact, he won only two more games in his career, one of which was his next start, a complete-game three-hitter against the Baltimore Orioles in the second game of a doubleheader five days later. He made only two starts in 1958 and was optioned to the Triple-A Indianapolis Indians of the American Association at the end of July. He never made it back to the majors, and finished with a 40-36 record.