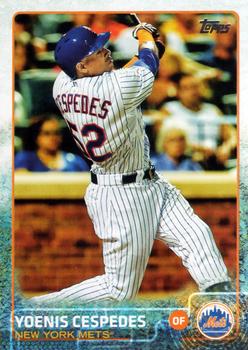 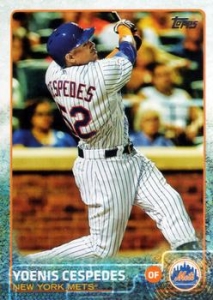 The New York Mets trailed the Washington Nationals in the National League East for the entire month of July in 2015. When the Mets were down by two games as the trade deadline approached at the end of the month, they made several deals to improve the team in hopes of catching the Nationals over the last two months of the season.

They traded for Kelly Johnson and Juan Uribe to add some bats to their bench, and Tyler Clippard to bolster their bullpen. But their biggest move came on July 31, the final day they could make a trade without needing to clear waivers. New York dealt two prospects, Luis Cessa and Michael Fulmer, to Detroit for outfielder Yoenis Céspedes. They hoped that the 29-year-old Céspedes, who was hitting .293 with 18 home runs at the time of the trade, might provide the spark they needed in their lineup.

“It does reflect the fact that we believe we’re in a position to compete through the rest of the season for a playoff spot,” said Mets general manager Sandy Alderson. “We’re going to do everything we can to ensure that competitive level and I think that’s reflective in what we’ve done over the last week or so.”1

After arriving in New York, Céspedes batted .274 with seven extra-base hits and eight RBIs in his first 17 games. Even more importantly, the Mets were 11-6 in those games. When they arrived in Colorado for their series against the Rockies on August 21, the Mets had taken over sole position of first place, four games ahead of the Nationals.

Rookie right-hander Jon Gray started for the Rockies, just his fourth start after being called up from Triple-A Albuquerque at the end of July. In one of those earlier starts, Gray went six innings in a no-decision against the Mets at Citi Field on August 10. He allowed just one run while striking out five Mets, leaving with the Rockies up 2-1 before New York rallied to win against the Colorado bullpen. Gray, however, was not as successful in keeping the Mets in check this evening.

With two outs in the first, Céspedes doubled and came home on Lucas Duda’s single to put the Mets ahead 1-0. Carlos González answered in the bottom of the inning with a home run over the right-field wall for the Rockies’ first run.

New York surged ahead in the second. Johnson led off with a single. Gray got Travis d’Arnaud to fly out but then walked Michael Conforto and hit Mets starter Bartolo Colon on the wrist to load the bases.

Colon, at 42 the oldest starting pitcher in the majors, ended up with a “golf-ball-size bump on his forearm near his wrist” when he returned to the mound in the bottom of the second. “I hope the lord protects me and I don’t have to miss a start,” he said afterward.2

This brought up Céspedes. He worked the count full before sending the ball over the right-field fence for a grand slam, putting the Mets up by six runs. It was the second grand slam of his career, the other one coming when he was with Tigers on April 19.

Rockies manager Walt Weiss replaced Gray with Christian Bergman, who got d’Arnaud to line out for the third out.

Colon, perhaps affected by his injury, struggled in hitter-friendly Coors Field. He gave up a home run to Ben Paulsen to lead off the second, and the Rockies continued to rally in the third. With one out, González singled and came home when Nolan Arenado doubled. Colon got Paulsen to ground out for the second out, but DJ LeMahieu singled to bring Arenado home. Colon walked Nick Hundley before he closed the frame by striking out Brandon Barnes. But the Rockies had scored two runs and the deficit was down to 7-4.

Céspedes struck again in the fourth. With Bergman still on the mound, Céspedes led off. He took a called strike before launching Bergman’s second pitch over the center-field wall to put New York ahead 8-4.

Colon continued to get knocked around by the Rockies’ bats in the fourth. Blackmon doubled with one out. He walked González with two outs. Then Blackmon stole third on Colon’s first pitch to Arenado to put runners at the corners. Arenado hit the next pitch over the left-field wall; the Mets’ six-run lead was now only 8-7.

Mets manager Terry Collins replaced Colon with rookie Sean Gilmartin, who got the final out of the fourth. The three homers Colon gave up were a season high for the veteran.3 Gilmartin gave up a leadoff single to LeMahieu in the fifth. Hundley followed with a triple to score him and tie the game.

But the tie lasted only until Céspedes’s next time up. The native of Cuba put the Mets ahead again in the sixth with his third home run of the night, a two-run blast over the right-field wall for a 10-8 lead. The home run increased Céspedes’s RBI total to seven for the game.

Céspedes rounded the bases and according to the New York Times, “crossed home plate, mouthed ‘Wow’ and flashed a smile. His Mets teammates excitedly reached out to high-five him as he passed through the dugout, everyone making sure they at least touched his hand. They looked like the hordes of people who rush barricades just to touch the pope.”4

“Tonight was a special night,” Céspedes said. I was able to make a good swing and good contact.”5 Collins said, “I have never seen anything like that. He continues to display the talents that everybody talks about. He’s a special talent. You just can’t wait to see what he will do tomorrow.”6

Although it was clearly Céspedes’s show, the Mets added four more runs in the final three innings. D’Arnaud and Conforto hit back-to-back home runs in the seventh against reliever Gonzalez Germen. Céspedes singled off reliever Tommy Kahnle to lead off the eighth. He moved to second on a force out and then stole third. Wilmer Flores’ double brought him home. It was the fifth run he scored in the game. New York added one more run in the ninth when Uribe doubled and a pair of fly balls brought him home. The final Mets tally was 14 runs.

Céspedes, who finished a triple shy of hitting for the cycle, was the third Mets player to hit three home runs in a game in 2015. Kirk Nieuwenhuis and Lucas Duda had done it earlier. Céspedes said afterward that it was the best game of his career, adding, “It’s like any other player or good hitter: They find a night when they can lock themselves in, and they won’t miss the ball.”7

The fifth-inning run on Hundley’s RBI triple was all Gilmartin allowed. The southpaw pitched well for 2⅓ innings to earn his second win of the season. The Rockies scored a meaningless run in the seventh before Clippard and Jeurys Familia kept them scoreless in the last two innings. Familia would shut down the Rockies again the next night. Although the Mets closer didn’t earn a save for his efforts, manager Collins said, “In this park, those were saves.”8

The win put the Mets five games up in the division race. Céspedes continued his offensive output through the rest of the season, hitting 12 more home runs and getting 29 RBIs to help the Mets return to the postseason for the first time since 2006.