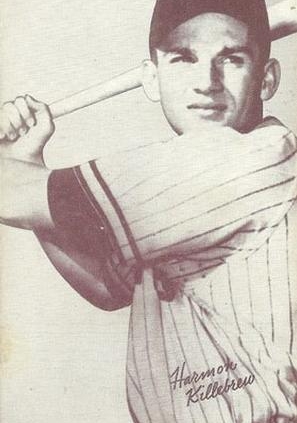 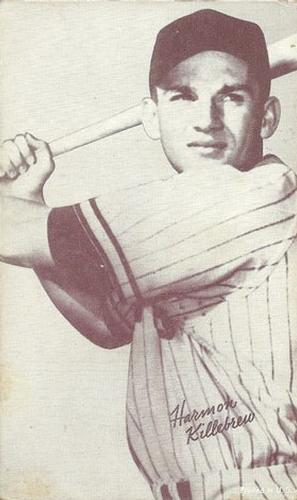 Harmon Killebrew’s first major-league start hinted at a career of power and prosperity for the 18-year-old from Idaho who finished his career with 573 home runs. “Killebrew makes a sharp debut — It looks as if the boy will do,” read the quote right below Bob Addie’s byline in the Washington Post.1

Batting eighth in the Washington Senators’ lineup and playing second base, the rookie infielder contributed a 3-for-4 four output and two RBI in the second game of a doubleheader at Connie Mack Stadium. Attendance was scant (2,094) for Washington’s 10-3 win over the Philadelphia Athletics.2 Both teams finished 1954 in the lower half of the American League; Philadelphia occupied last place while Washington hovered a couple of notches above in sixth place. It was the last season for the Athletics in the City of Brotherly Love. In October A’s owner Connie Mack sold the team to Arnold Johnson, who moved it to Kansas City.

Washington scored its first run in the top of the first. With two outs, Clyde Vollmer, an outfielder playing his final big-league season,3 banged a single, went to second base on an error by Philadelphia center fielder Bill Wilson, and scored on Jim Busby’s single.

With two outs in the top of the second, Killebrew singled for his first of 2,086 major-league hits. Keriazakos followed with another base hit; Eddie Yost’s pop fly to A’s second baseman Jacobs ended a potential rally.

Washington tied the game in the top of the fourth when Roy Sievers tripled and scored on Tom Umphlett’s single. Both hits went to center field; Tipton’s flyout to center was the third straight play to Wilson. Killebrew’s 5-4-3 double-play grounder was his only out of the game.

Philadelphia scored its last run of the game in the bottom of the fourth. Pete Suder doubled, advanced to third on Kellner’s grounder to shortstop, and crossed home plate on Jacobs’s single..

Washington responded with three straight hits in the top of the fifth. After Keriazakos struck out looking, Yost doubled and stayed there when Pete Runnels got an infield single. Vollmer singled to center, scoring Yost, but was thrown out trying to stretch his hit into a double. Busby’s groundout to Jacobs finished the rally.

The Senators went up 4-3 in the top of the sixth when Sievers walked and Killebrew doubled him home with two outs.

In the top of the seventh, Washington exploded for five runs. Yost doubled for his second hit of the game, went to third on Runnels’ infield single to first base, and scored on Vollmer’s single.

With Runnels on second and Vollmer on first, Busby bunted. First baseman Limmer threw the ball away, allowing Runnels to score, Vollmer to take third, and Busby second.

Sievers made the Senators’ first out with a grounder to third. Left-hander Alex Kellner walked Umphlett intentionally and faced Tipton, a .223 hitter in his last year in the majors.5 Tipton singled, scoring Vollmer and Busby; Umphlett went to second base. Then Killebrew got his first major-league RBI with a single to score Umphlett. Tipton went to second, but Keriazakos’s double-play grounder ended the onslaught.

Kellner had been bashed for 16 hits. Sonny Dixon, a former Senator who came to the Athletics in a three-way trade with the White Sox in June, relieved him in the top of eighth.6 Runnels touched Dixon for a one-out double and scored on Vollmer’s double.

In the top of the ninth, Killebrew drew a walk in his last at-bat of the game.

Killebrew was not the only standout for the Senators. Vollmer went 4-for-5, drove in three runs, and scored twice. Though 1954 was his last major-league season, Vollmer played in the minors in 1955 and 1956.

Runnels went 3-for-5. Keriazakos struck out eight in a rare starting appearance. (He was the starting pitcher in three games that year.)

If there were a Player of the Game for the losing side, it would be Jacobs: 2-for-3, one RBI, one run scored, and two of Keriazakos’s eight walks. Power, too, had a good day with a 2-for-4 showing, one run scored, and one walk. In the previous December, Philadelphia had acquired Power in an 11-player trade with the Yankees.

The Senators were 7-15-1 during their August games before the doubleheader against the Athletics. They won two of their remaining nine games in August, finishing the season with a 66-88 record.

Killebrew had appeared in six Senators games before his début as a starter, four times as pinch-runner and twice as a pinch-hitter. Despite his impressive day against the Athletics, he played in only two more games for the Senators in his rookie season.

At 17, Killebrew had signed with the team in mid-June, about a week and a half before turning 18 and a couple of months before the August 23 game. “Killebrew swings a [bat] better than any youngster I’ve ever seen,” said Senators farm director Ossie Bluege. “Perhaps the only player in the American League who is faster is Mickey Mantle, of the Yankees.”7 A bonus baby, Killebrew signed for a reported figure of $50,000.8

Killebrew spent seven seasons in Washington. When the Senators moved to Minnesota and changed their moniker to Twins, he became a fixture in the Twin Cities. Although Killebrew was synonymous with Minnesota baseball after 14 years, the relationship between player and team ended after the 1974 season. Killebrew signed with the Royals for 1975. “I didn’t understand it,” said future Hall of Fame third baseman George Brett. “Why would a guy play his whole career in one town and then come all the way over to K.C. for one last year? The only thing I could think of was that Harmon wanted to play one more year and Calvin [Griffith, team owner,] probably said, ‘Well, we don’t want you, we’re only going to pay you this. …’ And Harmon probably got more money to come to the Royals, but he thought he could play one more year, too. Be productive, and do something you love to do.”9

Brett’s statement about “his whole career in one town” reflects a common, but not completely unfounded, misperception about Killebrew. He didn’t become an everyday player for the Senators until 1959.

When the Hall of Fame slugger went into hospice a few days before his death on May 17, 2011, both the Washington Nationals and Minnesota Twins honored his legacy by hanging a Killebrew jersey in their dugouts.10 Minnesota furthered the devotion by wearing 1961 throwback jerseys during the remainder of the 2011 season.11

3 Vollmer played for the Triple-A Charleston Senators and the Triple-A Buffalo Bisons in 1955. He played for Buffalo and the Double-A Little Rock Travelers/Montgomery Rebels in 1956.