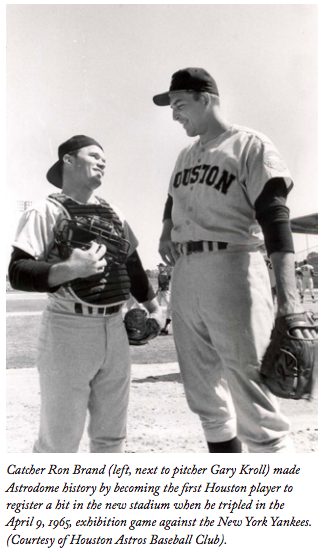 Baseball fans in Houston had never had it so good in the short history of the Astros. After completing a sweep of the Dodgers on August 21, the Astros climbed into seventh place, one-thousandth of a percentage point ahead of Philadelphia. As John Wilson wrote in the Houston Chronicle, “When you’ve been where the Astros have been, that’s Mount Everest.”1 Houston’s 59-69 record was its best ever after 128 games, and this was only the second time the club had been as high as eighth at this point in the season.2 These were heady days indeed.3

The Cubs faced a delay in their travel plans the morning of the game. They were 40 minutes late leaving O’Hare Airport in Chicago, due partly to air traffic and partly to catcher Randy Hundley apparently oversleeping.4 When the Cubs arrived in Houston, they brought a 68-61 record and a four-game win streak. They were locked in a tight battle for the runner-up spot in the 10-team National League with Cincinnati and San Francisco, and all three trailed runaway leader St. Louis. Despite the Cubs’ successful run, there was a feeling that “the Astros will have a further chance to exercise their recently effective muscle and strengthen their growing confidence.”5 Indeed, the Astros were enjoying a sustained run of respectable baseball. After a dismal start to the season that had cost manager Grady Hatton his job, Harry Walker had piloted the Astros to a 36-31 record since taking over.6Astros starter Mike Cuellar, who battled shoulder problems during the season,7 entered the game 6-9 with a 2.37 ERA.8 Facing Cuellar, the Cubs’ Don Kessinger opened the game with a single to center field. Billy Williams advanced Kessinger to second with a one-out infield  single. With cleanup hitter Ernie Banks at the plate, Cuellar had Williams dead to rights at first base but his wild throw on the pickoff  allowed both Kessinger and Williams to move into scoring position. Neither Banks nor Ron Santo could drive them home, though, and the Cubs finished their inning scoreless.

Twenty-three-year-old Joe Niekro took the mound for the Cubs. Norm Miller flied out to center fielder Adolfo Phillips, and Hector Torres lined out to second baseman Glenn Beckert. With two out, Niekro walked Jim Wynn and surrendered a double to Rusty Staub. The Astros’ first baseman had recently emerged from a lengthy RBI slump by driving home eight runs during the preceding series against the Dodgers.9 Denis Menke followed Staub by grounding out to shortstop Kessinger, ending the inning.

The game remained scoreless after the second inning as neither team could muster more than a lone single. The Cubs broke the tie by striking quickly in the top of the third. Kessinger led off by doubling to right field, and scored on Beckert’s single to left, giving Chicago the lead, 1-0. Cuellar limited the damage by containing the heart of the Cubs’ order. Williams struck out looking, and Banks and Santo hit groundballs to third baseman Bob Aspromonte. Niekro preserved the lead by setting down the top of the Astros’ lineup in the bottom of the third.

The score remained 1-0 through the fifth inning. The Cubs managed no more than a double by Jim Hickman and a single by Beckert in the fourth and fifth innings, respectively. Niekro was in the midst of retiring 10 consecutive Astros, a streak not broken until his opposite number, Cuellar, hit a two-out single in the fifth. Santo doubled the Cubs’ lead by opening the sixth with his 20th home run of the season, over the left-field wall. Hundley grounded out to shortstop Torres, and Cuellar surrendered a single to Phillips but struck out Hickman and Niekro. In the Astros’ sixth, Niekro continued his “almost flawless”10 performance by taking down Torres, Wynn, and Staub. Kessinger led off the seventh with a single to left field, and advanced to third on groundouts by Beckert and Williams. When catcher “Big John” Bateman squeezed Banks’ popup in foul territory, the threat ended. Niekro, meanwhile, continued to keep the Astros off the bases with another three-up, three-down inning. He ran the streak to nine consecutive outs before it was broken by Miller’s two-out double in the eighth. When Torres grounded out to Beckert, the game moved to the ninth with the Cubs still holding a 2-0 lead.

Rookie Steve Shea took over pitching duties from Cuellar in the top of the inning. He opened the inning by striking out Niekro. Kessinger flied out to Wynn in center field before Beckert’s grounder to Torres ended the Cubs’ ninth. To this point, Niekro had surrendered only four hits and a walk to the Astros. Houston’s streak of 34 games without being shut out11 appeared in jeopardy.

What transpired next was described by the Houston Post’s Joe Heiling, who wrote, “Reconstructing the Astros’ unbelievable ninth-inning rally … is like gathering details at the scene of an accident. You get a lot of conflicting reports. A number of people saw it differently.”12 What was clear was that Wynn led off with a line drive past third and into left field for a double, sending Niekro to the showers. Cubs manager Leo Durocher brought reliever Phil Regan into the game. Regan, who would be awarded The Sporting News’ Fireman of the Year Award after the season, had been the source of recent controversy. During a game at Wrigley Field against Cincinnati the previous Sunday, a tube of Vaseline and slippery elm tablets apparently fell out of his jacket during a basepath collision with Reds catcher Pat Corrales.13  Regan denied throwing illegal pitches and he was absolved by NL President Warren Giles before the series in Houston.14

Staub singled to left field against Regan, scoring Wynn and cutting the deficit to 2-1. Walker sent in Dick Simpson to run for Staub. Menke’s groundball forced Simpson at second base for the first out. Despite a history of tormenting the Cubs with home runs, Aspromonte struck out.15 With two outs, Bateman kept the rally alive, hitting a single to right field and advancing Menke to third base. Bateman was lifted for pinch-runner Ron Brand, the backup catcher.

With two on and two out, Walker sent Doug Rader up to hit for Shea. Rader had missed the previous game, two days earlier, with a fever and tonsillitis,16  and Walker had planned to rest him after he felt weak and dizzy during batting practice. “We felt if Doug played a complete game or had to do any extra running, he’d get dizzy,” the manager said.17  Rader, the “Red Rooster,” blooped a ball that was barely fair into right field in front of the hard-charging Hickman.18  The hit scored Menke to even the game at 2-2. Rader went to second base on Hickman’s throw to the plate, and Brand reached third base to leave Houston 90 feet from an improbable win.

Lee Thomas, who pinch-hit for Cuellar in the eighth and remained in the game, taking over left field, came to the plate with first base open. Despite Thomas’s .175 batting average,19 the Cubs intentionally walked him to load the bases. Up next was Norm Miller, who had entered the game hitting .211. Miller had been sidelined recently with an ailing back and felt compelled to make up for it. He said, “I had to hit to redeem myself for the past two weeks. What had I done?  Nothing.  Absolutely nothing, but sit on the bench.”20 After taking Regan’s first pitch for a ball, Miller sent a bouncing ball up the middle and into center field for the decisive hit.21 Brand scored from third, and the Astros won, 3-2, to the delight of the 16,714 in attendance.

The Astros’ win was their season-high fifth in a row. After years of losing since the franchise’s inception, the club and its fans were enjoying a run in which success was almost expected. “They’ve got the fever,” said Walker after the game. “They’re getting to believe something will happen. Even in a game like tonight where they hadn’t had a break for eight innings, they still felt they’d win it somehow.”22 Houston extended its win streak to six by defeating the Cubs the next night, but the coming 17-game road trip would begin to bring down the Astros from their current “heights.” Houston lost 17 of its final 25 games to finish 72-90. With the Mets finishing 73-89, the Astros would finish in the NL basement for the first time. After the NL split into divisions for 1969, Houston at least was assured of finishing higher than seventh in future seasons.

3 The Astros did not play on Thursday, August 22, but the Phillies did. Because the Phillies won on the 22nd, the Astros “reclaimed” eighth place by game time on the 23rd.

16 “Astronotes,” Houston Chronicle, August 22, 1968, 2 (sports). While the Chicago Tribune also reported tonsillitis as the cause of Rader’s illness, the August 24 Houston Post said it was bronchitis.