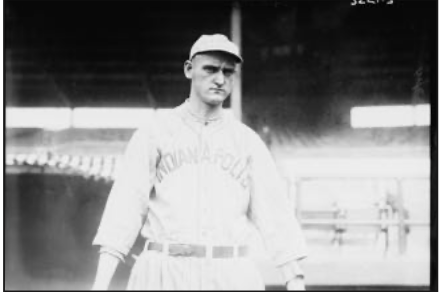 George Kaiserling (13-5 3.29 ERA) was the starter for the HooFeds and he was working on a personal winning streak that had reached four games. He was a career minor leaguer whose only major-league time was his two years in the Federal League. Starting for the Tip-Tops was Dan Marion, who entered the game with a record of 3-1 and a 4.20 ERA.

Brooklyn and Indianapolis had met on August 21 (Indianapolis swept both games, 4-2 and 9-4) and August 22 as well with Indianapolis coming away with two more victories (12-6 and 5-0). Including the previous four games, all six of the contests were played at Federal League Park in Indianapolis. The Hoosiers had outhit Brooklyn over the course of the two doubleheaders, 46 hits to 35. The first game on August 24 was a humdinger.1 It was full of action and it took a powerful rally for Indianapolis to retake the lead after the Tip-Tops thought they had clinched the game in the 13th inning with two runs.2

Marion was easy to hit in the first and second innings for the Hoo-Fed batters. Indianapolis scored a run in the first and two in the second to take a 3-0 lead. Although Kaiserling pitched a good ballgame, he was careless in the fourth inning and the result was three Tip-Tops runs to tie the score, 3-3.3 Had the Indianapolis pitcher used a little more care in the fourth inning, the game may not have gone to extra innings.4 Tip-Tops second baseman Solly Hofman hit a ball back to Kaiserling, who trapped Al Shaw between third base and home plate. Kaiserling threw the ball to Bill McKechnie at third base, and Shaw was able to evade McKechnie’s throw to catcher Bill Rariden and scored the tying run.5

The game stayed tied 3-3 until the top of the sixth inning when Brooklyn scored another run to take a 4-3 lead. Indianapolis wasted little time in tying the game, scoring a run in the bottom of the sixth to again knot the score. In the sixth inning the Indianapolis captain, second baseman Frank LaPorte, injured a finger when it was hit by a pitched ball during a swing and had to leave the game. Vin Campbell finished LaPorte’s at-bat by striking out and Carl Vandagrift took LaPorte’s place at second base.6

The game remained tied through nine innings and then through the through the bottom of the 12th. In the top of the 13th inning, the visiting Tip-Tops scored two runs on a triple by Claude Cooper, a walk to Steve Evans, a force out, and a stolen base by Hofman, followed by a single from third baseman George “Tex” Wisterzil. After the two runs there was joy in the Brooklyn camp.7

But in the Hoosiers half of the 13th, McKechnie singled and scored on a double by Benny Kauff. Vandagrift then hit to Marion and reached base safely as the pitcher held the ball too long. Marion then threw badly to Evans on a groundball by Charlie Carr that allowed Kauff to score the tying run. Bert Maxwell came on in relief and Jimmy Esmond singled to fill the bases. Edd Roush pinch-hit for Al Kaiser and hit a sacrifice fly to Shaw that scored Vandagrift with the winning run.8

Leading the offense for Indianapolis in the first game was Kauff (double), who had three hits and two runs scored.

Kaiserling was the winning pitcher, going the entire 13 innings. He allowed 13 hits and six runs (four earned), walked three, and struck out four. The losing pitcher for Brooklyn, Marion, went 12 innings and gave up seven runs (four earned), 12 hits, and two walks. Maxwell, in relief, pitched a third of an inning and gave up Esmond’s hit and Roush’s game-winning fly ball.

One sportswriter attributed the Hoosiers’ winning rally to “loose fielding and the vigorous use of their bats.”10

The second game of the twin bill was called after seven innings with the HooFeds ahead 5-1. Night had begun to wrap the ballpark in its dusky mantle.11

In losing both games to Indianapolis, the Brooklyn Federals saw their pennant hopes come undone. They played three consecutive doubleheaders against the HooFeds and lost all six games.12

In addition to the game story and the box-score sources cited in the Notes, the author consulted Baseball-Reference.com and Retrosheet.org.