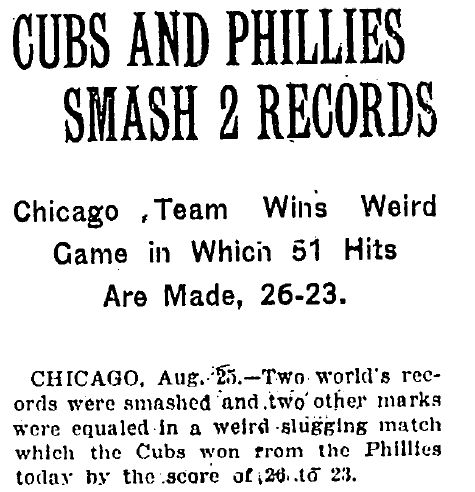 From 1901 through the end of the 2015 major-league season, one of the two teams has scored 20 or more runs in at least 236 games.1 Only twice has each team scored at least 20 runs. Both games involved the Philadelphia Phillies and the Chicago Cubs, and both games were played in Chicago. The first, on August 25, 1922, was played before approximately 7,000 fans in Cubs Park, and the Cubs prevailed, 26-23.2 This set a record for the most runs scored in a major-league game.3

Philadelphia batters had 26 hits, while the Cubs hitters mustered 25. (The 51 hits in the game also smashed the existing record, set on June 9, 1901, when the New York Giants and Cincinnati Reds collected 49 hits as the New Yorkers beat the Reds, 25-13.4) The Phillies and Cubs pitchers faced a total of 125 batters and walked 21 of them. Jimmy Ring started the game for the Phillies, and Tony Kaufmann took the mound for Chicago.

The game began normally enough. With one out in the top of the first, Philadelphia’s Frank Parkinson singled and was forced at second on a Cy Williams grounder to first. Williams was then caught stealing. Three up, three down. Chicago’s Cliff Heathcote led off the bottom of the first with a single to center. He moved up two bases on two groundballs and scored on Ray Grimes’s single to center. Philadelphia sent nine batters to the plate in the top of the second, and with four singles, two Cubs errors, and a walk, the Phillies scored three unearned runs.

Chicago then erupted for 10 runs in the bottom of the second. With two outs and men on first and second, Phillies third baseman Russ Wrightstone dropped a pop fly in foul territory off the bat of Heathcote. The floodgates opened, as Heathcote walked to load the bases and the next eight batters also reached. Hack Miller and Bob O’Farrell both homered, and the Cubs got six hits and three walks. The Phillies made two errors, and all 10 runs were unearned. After two innings of play, Chicago led, 11-3. Philadelphia responded with two runs in the third and another in the fourth. The score was now 11-6.

A few other records were tied in this hitfest. Chicago right fielder Marty Callaghan tied a record for most times facing a pitcher in one inning. In the top of the fourth, he led off with a single to right. The Cubs sent 19 batters to the plate, and the second time up, Callaghan stroked a second single to center, driving in two runs. He made the last out of the inning, striking out. As if this weren’t enough, the Cubs pushed 14 runs across the plate (12 earned) in the fourth inning. This tied a record set on July 6, 1920, when the New York Yankees scored 14 runs in the fifth inning of a 17-0 shutout against the Washington Senators. Kaiser Wilhelm, the Philadelphia manager, finally pulled Ring when Heathcote singled with the bases loaded and only one out, driving in the second and third runs of the inning. Lefty Weinert came in and proceeded to pitch batting practice to the Cubs, who collected two singles, four doubles, a walk, a hit batsman, and a home run (Miller’s second of the game) off him in the inning. Suddenly it was 25-6 and the game was not even official yet. Weinert was battered but stayed in to pitch 4⅔ innings and finish the game for Philadelphia.

Chicago added another run in the sixth on a double by Heathcote and an RBI single by Charlie Hollocher. In the eighth and ninth the Phillies made the game appear closer than it was. They scored eight runs in the eighth and six in the ninth, almost making an impossible comeback.

Chicago used five pitchers. Starter Kaufmann pitched only four innings but was credited with the win. George Stueland pitched three innings, allowing three runs. Uel Eubanks started the eighth but lasted only two-thirds of an inning. Ed Morris relieved him with two outs, the bases loaded, and five Philadelphia runs already in. Frank Withrow greeted Morris with a base-clearing double. If the save was an official statistic in those days (it was not), Tiny Osborne would have earned one after relieving the ineffective Morris in the ninth inning. Osborne allowed two earned runs on three hits and two walks, but struck out the side, including Bevo LeBourveau to end the game.

Philadelphia left 16 runners on base. (Chicago left 9.) The Cubs had eight doubles and three home runs. Philadelphia had an amazing 20 singles as part of its 26-hit attack. Wrightstone led the Phillies with a 4-for-7 afternoon, scoring three runs and driving in four. For Chicago, Heathcote was perfect, 5-for-5 plus two walks. He scored five of the Cubs’ runs and collected four RBIs. Hollocher, who followed Heathcote in the batting order, knocked in six runs with his 3-for-5 performance. Hack Miller added two singles to his two home runs; he scored three times and drove in six runs.

Despite allowing 16 runs in 3⅓ innings, Ring’s ERA rose only slightly, from 4.22 to 4.44. He had faced 28 Chicago batters and allowed 12 hits and 5 walks, but the Philadelphia errors meant that 10 of the 16 runs off him were unearned. He and Weinert had “endured a terrific mauling.”5 In all, 21 of the 49 runs were unearned, as Philadelphia committed four errors and Chicago had five.

The game lasted 3 hours and 1 minute. Frank Schreiber of the Chicago Tribune wrote that “cries from various parts of the park were imploring for a ‘touchdown,’ while others besought the players to ‘shoot another basket.’”6 The previous record for runs in a game was 44, set on July 12, 1890, when the Brooklyn Ward’s Wonders beat the Buffalo Bisons, 28-16.

1 For more information on games in which a team has scored at least 20 runs, see Michael R. Huber and Rodney X. Sturdivant, “Building a Model for Scoring 20 or More Runs in a Baseball Game,” Annals of Applied Statistics, Volume 4, Number 2, June 2010.

2 The story of August 26, 1922, in the New York Times led with, “Two world’s records were smashed and two other marks were equaled in a weird slugging match which the Cubs won from the Phillies today by a score of 26 to 23.” The article had neither a staff byline nor a wire-service credit, so its source is unknown.

3 In the other Cubs-Phillies game, on May 17, 1979, the Phillies and Cubs combined to score 45 runs on 50 hits in a game played at Wrigley Field. For more information, read this SABR Games Project article.

4 According to retrosheet.org, the Reds forfeited the game to the Giants.