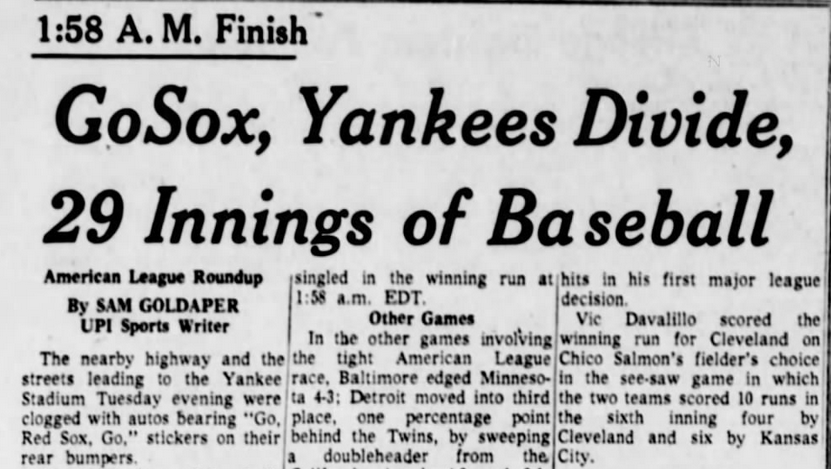 In 1967, although the New York Yankees were in the third season of 11 straight in which they would fail to win a pennant, interest was high as they took on the Boston Red Sox in a late-season series at Yankee Stadium.

The twilight-night doubleheader on Tuesday, August 29, drew 40,314 fans, and in the first game, each team had its ace on the mound. Jim Lonborg (17-6) faced Mel Stottlemyre (13-10). Stottlemyre struck out the side in the first inning. The Yankees managed two singles off Lonborg in the second inning but didn’t do any damage. Boston got into the scoring column in the third inning without the benefit of a base hit. Mike Andrews reached first base on an error by shortstop Ruben Amaro, moved to second on Lonborg’s bunt, took third on a wild pitch with José Tartabull at the plate and scored when Tartabull executed a squeeze play.

Lonborg retired the side in order in innings three through six. The Red Sox added to their lead in the top of the seventh inning. Reggie Smith reached base on an infield hit and stole second. Two outs later, he was still at second base, and Mike Andrews was issued an intentional pass. That brought up Lonborg, who singled to left field, scoring Smith, giving the Red Sox a 2-0 lead.

With one out in the top of the seventh inning, Lonborg, after retiring 14 batters in succession, lost his shutout when Tom Tresh homered to bring the Yankees to within one run. Lonborg would not be touched for another hit and would face the minimum number of batters from that point on to secure his 18th win of the season. Stottlemyre, who like Lonborg pitched a complete game, was charged with his 11th loss.

With their win in the opener, the Red Sox moved into undisputed possession of first place by a half-game. With the Red Sox, Tigers, Twins, and White Sox all within 2½ games of one another, every game mattered, not the least of which was the second game of the doubleheader. In that one, the Red Sox would face an old teammate, pitcher Bill Monbouquette.

Monbouquette came to the majors with the Red Sox and won 96 games for them during eight seasons from 1958 through 1965. Traded to the Detroit Tigers after the 1965 season, he was released after two relief appearances in 1967 and joined the Yankees in June. In 26 appearances, including four starts thus far, he was 3-3 with a 1.91 ERA, and would start the second game of the doubleheader.

After a scoreless first inning, the Red Sox drew first blood when Ken Harrelson homered after Smith had doubled to lead off the second inning, then scored on an errant throw after stealing third base. Boston had a 2-0 lead. Lee Stange was pitching for the Red Sox. He was 30 years old and played for the Twins and Indians before joining the Red Sox in 1966. He came into the game with an 8-8 record and with six complete-game wins (including two shutouts) since joining the starting rotation in June.

In the Yankees’ fourth inning, Mike Hegan led off with a double and advanced to third base when Tresh grounded out. Steve Whitaker stepped into the batter’s box and hit a ball in the general direction of the 402-foot sign in left-center field. It was beyond the reach of the outfielders and rolled to the fence. Hegan scored easily from third, and Whitaker raced around the bases. Red Sox center fielder Smith tracked down the ball and threw it to Rico Petrocelli. The Red Sox shortstop relayed the ball to catcher Mike Ryan, who tagged out Whitaker at the plate. Whitaker was credited with a triple, and the Boston lead was cut to 2-1.

The Yankees went into their half of the seventh inning still trailing 2-1. With one out, Bill Robinson and Bob Tillman singled and Red Sox manager Dick Williams brought in John Wyatt to face pinch-hitter Roy White. Wyatt, the right-handed relief ace of the Red Sox, was appearing in his 49th game of the season. Williams was looking for Wyatt to notch his 19th save. But White hit a fly ball to left field that scored Robinson with the tying run. Wyatt retired another pinch-hitter, Jake Gibbs, and the game went into the eighth inning. 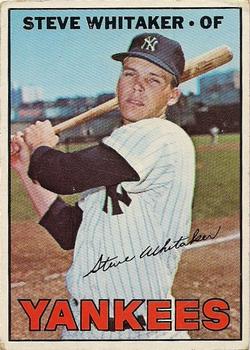 Dooley Womack was the new Yankees pitcher and matched Wyatt pitch for pitch as the game sailed into extra innings. Wyatt was removed for a pinch-hitter in the scoreless Boston 10th, and Dan Osinski retired the three Yankees he faced in the bottom of the inning. Womack, in his fourth inning of work, registered two quick outs in the top of the 11th before Petrocelli doubled. An intentional walk to Elston Howard brought up the pitcher’s spot in the batting order, and manager Williams inserted Norm Siebern as a pinch-hitter. Siebern singled to right field and Boston led 3-2. But dreams of a Boston sweep were put on hold when Whitaker homered off Red Sox reliever Sparky Lyle to knot the score again in the bottom of the inning.

Pitchers came and pitchers went. Batters were kept in check. In the bottom of the 15th inning, when the Yankees had two runners on with one out, Bucky Brandon entered the game for Boston. Brandon was supported by great glove work. Reggie Smith charged to glove Bill Robinson’s bid for a game-winner, picking the ball off the grass in short center field just as it was about to land. Carl Yastrzemski then lunged in left to rob Bob Tillman.

Bouton kept the Red Sox from scoring, scattering three hits in five innings. In the bottom of the 20th, John Kennedy singled with one out and Bouton was called upon to bunt. Bouton though, was hit in the right wrist with a pitch and left the game for a pinch-runner. Brandon hurled one more pitch – to Horace Clarke – and was lifted in favor of Jose Santiago, the seventh Red Sox hurler. Kennedy scampered home when Clarke singled at 1:57 A.M. on August 30, and the 6-hour, 9-minute marathon was over.

Not many in the original crowd of 40,314 were around for the finish, but the experience of a group that had taken a bus in from suburban Mount Kisco was especially painful. At 1:32 A.M. the game was 19 innings old, and with the bus driver apparently growing impatient, Bob Sheppard’s voice came over the loudspeaker urging the folks from Mt. Kisco to leave “immediately.” Thus, after being in their seats since 5:00 P.M., they were deprived of seeing the game’s final inning.

The players were in a reflective mood afterward. When Yastrzemski said, “You play that long, you just don’t have any reactions.” Howard, who had caught the entire first game and the last 11 innings of the second game, said, “He said his tail is dragging. How old is Yaz, 28? I’m 38. How do you think I feel?” Bouton added, “Once we get past the 16th inning, I’m tough to beat.”1

The Wednesday matinee was played in front of 22,766. Yastrzemski, who had been hitless in 17 at-bats, was replaced in left field by George Thomas. Yankees pitcher Al Downing yielded a run in the fifth inning. Reggie Smith doubled, advanced to third on a single by Petrocelli, and scored on a single to left field by Thomas.

In the Yankees sixth, singles by Amaro and Kennedy put runners on first and third. Amaro was caught off third when pitcher Downing hit a comebacker but stayed in the rundown long enough to allow his mates to advance to second and third. Hegan’s grounder to first was corralled by George Scott, but Kennedy ran in from third with the tying run.

Yastrzemski came into the game, replacing Thomas, in the eighth inning. In the top of the 11th, after Bill Robinson robbed leadoff hitter Reggie Smith of an extra-base hit and Petrocelli struck out, Yastrzemski homered on Downing’s first pitch to give the Red Sox a 2-1 lead.

Yaz said of the situation, “If it’s a big score one way or the other, I’m shooting through the middle to get out of the [hitless] rut. But with that score, I was going for it all the way. I said to myself, I’ve been going for the home run all series, this is no time to stop.”2

In the bottom of the inning, the Yankees put runners on first and second with two out, but reliever Wyatt worked himself out of trouble, inducing White to ground out to second base. The contest took only 2:32 to complete. Wyatt, who had come on in relief in the eighth inning, picked up his eighth win of the season against six losses. The Red Sox returned to Boston leading the AL by 1½ games. As for the Yankees, they were in ninth place, 16½ games and 10 Septembers out of first place. (They didn’t win another pennant until 1976.)

In addition to the sources cited in the Notes, the author consulted Baseball-Reference.com and Retrosheet.org: