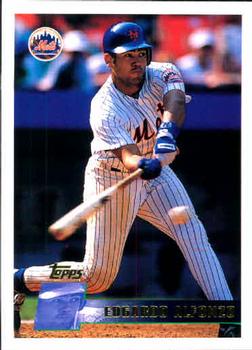 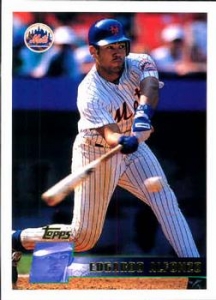 Edgardo Alfonzo did what few achieve in New York – be great while going relatively unnoticed. Alfonzo didn’t receive much attention, nor did he seek it out. On a team with power-hitting catcher Mike Piazza and outspoken manager Bobby Valentine, even Alfonzo’s breakout season of 1999 – which culminated an eight-year climb to his personal summit – could barely garner the recognition it deserved. But on a late August night in Houston, Alfonzo stood alone with the greatest single-game offensive performance in franchise history.

He became the first Met to record six hits in a game – doing so without wasting a turn at the plate – as well as the sixth to launch three home runs. Alfonzo also set club marks for runs scored (6) and total bases (16).

Even in the wake of a one-man show that would usually make the modest a bit self-congratulatory, the unassuming second baseman, when asked about his favorite part of the evening, provided a rather self-effacing answer.

“The last out, because we won the game,” he said. ”I don’t think it’s going to be good if you have the numbers and you lose the game.”1

The chances of a Mets loss were greatly reduced early on. Alfonzo’s smooth right-handed swing deposited Houston starter Shane Reynolds’ first-inning offering into the second row beyond the distant left-center-field fence at the spacious Astrodome. New York then sent nine to the plate in the second inning, in which Alfonzo singled to the opposite field to help prolong a six-run frame.2

With Reynolds off to an early shower, Alfonzo’s attack on Astro pitching persisted. After Rickey Henderson’s single, he sent another home run to left field against reliever Brian Williams only to return two innings later to haunt Sean Bergmanwith the same result. Alfonzo, who had long since surpassed his career high for round-trippers in a season, opened the sixth by connecting on his third of the game – the first Met to hit a trio of round-trippers since Gary Carter in September 1985 – and the first visiting player to hit three at the Astrodome. It was his 23rd for the season. He’d finish with 27 to go along with 108 RBIs, which obliterated his previous personal bests and set new highs for Mets second basemen.

“They weren’t cheap shots,” said Astros slugger Jeff Bagwell, quite familiar with homering at the Astrodome. “They never are here. They were no-doubters; you knew it when they left the bat. He’s locked in right now. I thought he might hit five”3

Alfonzo kept them in the park from there on out. But he wasn’t done setting records. He singled and scored in the eighth and then cemented his 6-for-6 masterpiece with a ninth-inning run-scoring double that pushed the New York lead to 15-1. When he came home later in the inning to score his sixth run, the 16 total bases joined him with 17 other major leaguers who had reached that amount in a nine-inning game since the turn of the twentieth century. Even the fans at the Astrodome who stayed to witness this beatdown stood and applauded Alfonzo’s feat.

Not bad for someone coming off a 3-for-30 cold spell.

“Every player goes through a slump,” Alfonzo told the New York Times. “I tried to find out what I was doing wrong. Every day, I try to be positive and to hit the ball really hard. The home runs, I don’t think about. They just come.”

“He has very high expectations for his play and he keeps striving to be better,” Valentine said. “That’s why he isn’t settling for being a .300 hitter and hitting to right field and taking a pitch on a 3-and-1 count. Edgardo knows he’s good, but he doesn’t quite know how good he is. … His teammates have a better appreciation of how good he is.”4

In the shadow of Alfonzo’s potency was a pair of trade deadline pickups showing their worth. Darryl Hamilton went 4-for-5 with three RBIs, including a homer to lead off the second. Shawon Dunston took over in center field for Hamilton when the game was out of reach and proceeded to produce two run-scoring singles in the late innings. The last, a base hit up the middle that plated Alfonzo and Benny Agbayani, polished off New York’s 17-run demolition.

As for two batters who occupied the heart of the Mets lineup: John Olerud and Piazza were rather pedestrian in comparison to Alfonzo. Each had just one hit, but both came in the explosive second inning. Olerud doubled to drive in “Fonzie” and Henderson, while Piazza followed with his 32nd homer of the year.

“You can’t even say they found holes,” Bagwell said. “They didn’t get any bloop hits. Everything they hit was a rocket. They must have eaten something good on the plane.”5

The explosion of hits and runs all but obscured Masato Yoshii’s excellence on the mound. The Mets starter never gave the Astros a chance to entertain a comeback. In bringing his record above .500 (9-8), he allowed two singles and a walk over six shutout innings while striking out eight. The relievers were only generous enough to yield a solo home run in the seventh.

New York didn’t just knock around a team sporting a glass jaw. The Astros were viable championship contenders zeroing in on an NL Central title. The Mets also were seeking a postseason berth. At 80-52, Valentine’s squad was keeping pace with Atlanta entering the regular season’s home stretch while staying three games ahead of the Cincinnati Reds for the only wild-card spot.

The Mets had the playoffs firmly in their grasp and yet almost let it slip away. A late September losing spell was salvaged by a sweep of Pittsburgh to end the regular-season schedule and a chance for Alfonzo, who ended the year with a .304 batting average and a .385 on-base percentage, to add another distinctive trait to his emerging stature.

New York’s 5-0 victory over Cincinnati in a one-game showdown to determine the wild card began with Alfonzo’s two-run homer to straightaway center. Given playoff life, “Fonzie” received and seized another opportunity the very next night. He stunned the Arizona Diamondbacks in the opener of the National League Division Series with a ninth-inning grand slam – quickly solidifying himself as a clutch postseason performer.

The Mets took down Arizona before bowing out to the Atlanta Braves in a six-game NLCS punctuated by two extra-inning thrillers. New York advanced through the National League playoffs the next year, reaching its first World Series since 1986. During a run that ended in a fall classic loss to the Yankees, Alfonzo extended his postseason hitting streak to 13 games.

The Venezuelan native would emerge as one of the Mets’ greatest discoveries. An undrafted free agent in 1991, he developed into the franchise’s seventh-most valuable player in terms of Wins Above Replacement (WAR) – with four seasons batting better than .300 and the fifth-best hit total in Mets history.

Alfonzo maintained a lasting reputation among fans for dependability at the plate and in the field – someone who rarely wavered in a big spot. His Mets career was marked with consistency and standout performances – none more prolific than the late August evening at the Astrodome that remains the standard by which future Mets hitting achievements are measured.

In addition to the references cited in the Notes, the author consulted Baseball-Reference.com, Retrosheet.org, and Ultimatemets.com.