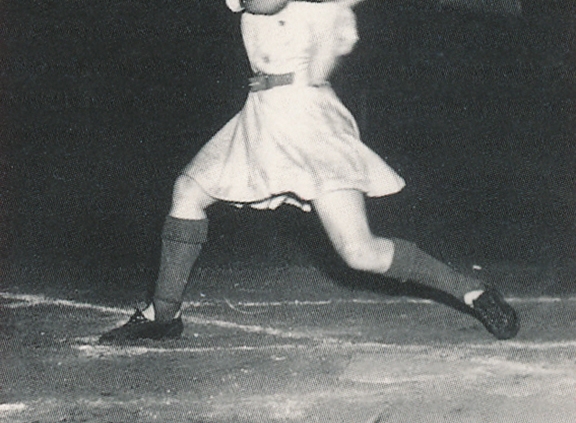 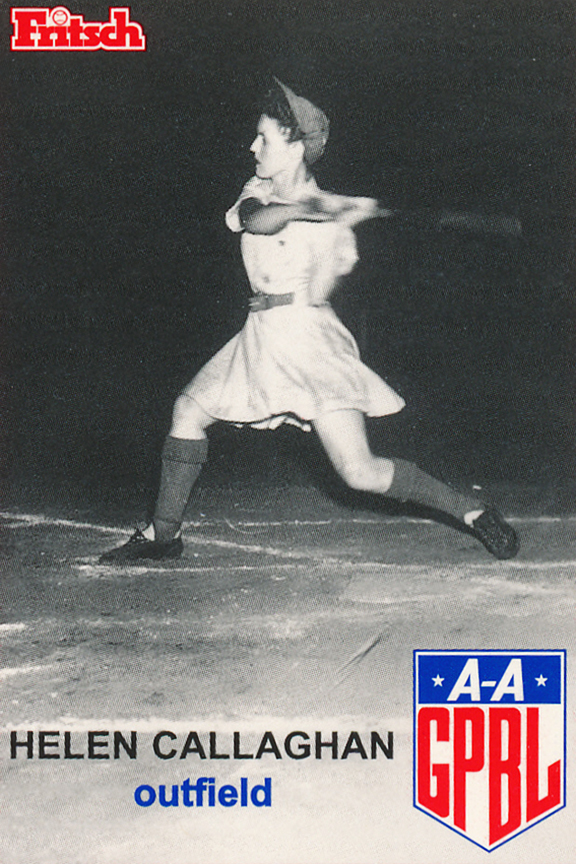 The 1945 season was the height of the Deadball Era in the All-American Girls Professional Baseball League (AAGPBL).1 After a flurry of early-season no-hitters, the women’s circuit moved the pitching rubber two feet farther away from home plate in the middle of July,2 but the change had a limited effect on offense. The final league batting average was a feeble .188, and teams continued to rely heavily on small ball to score runs. Perhaps no player was better suited to that style of play than Helen Callaghan (later Candaele/St. Aubin) of the Fort Wayne Daisies.

Callaghan was a speedy outfielder with a powerful arm,3 but it was her offensive abilities that set her apart. The Vancouver, British Columbia, native hit for average, had some pop in her bat, and stole bases with abandon.4 A good eye at the plate and a mastery of the drag bunt from the left-handed batter’s box made her an ideal leadoff hitter.5 In her rookie season, 1944, she finished second in the league with a .287 batting average while swiping 112 bases. She had an even better season in 1945.

Callaghan, like most of her Daisies teammates, had spent her rookie season toiling for the Minneapolis Millerettes. After drawing sparse crowds in Minneapolis in the season’s first half, the league decided to turn the Millerettes into a road team in late July.6 They finished the campaign with the league’s worst overall record and were moved to Fort Wayne for the 1945 season.7 Much stronger community support,8 combined with the players’ extra year of experience, turned the Daisies into a winner.

Coming into the Labor Day weekend – the final weekend of the regular season − Fort Wayne was sitting in second place with a 58-46 record. The Daisies, who had already clinched a playoff spot, were five games behind the Rockford Peaches with six games to play. Although they still had a slim chance at the pennant, their focus was on finishing second so they could play the fourth-place team in the first round of the Shaughnessy playoffs.9

Fort Wayne kicked the weekend off with an August 31 doubleheader against the South Bend Blue Sox. In the seven-inning opener, Daisies manager Bill Wambsganss gave the ball to his ace, Dorothy “Dottie” Wiltse (later Collins).10 Wiltse, sporting a 27-10 record, was having a career year.11 The 21-year-old hurler had used her devastating curveball to toss two no-hitters earlier in the summer.12

Phyllis “Sugar” Koehn got the start for South Bend. Koehn had been the Blue Sox’ regular third sacker and key run producer since coming over in a blockbuster trade with the Kenosha Comets on June 29.13 On August 22 she also took on regular pitching duties after Blue Sox manager Marty McManus fined and suspended hurlers Betty Luna (later Hill) and Nalda Bird (later Phillips) for the remainder of the season for “insubordination.”14 Koehn had performed remarkably well as an emergency starter.15 In her previous outing, she tossed a five-hit, complete-game victory over Rockford.16

The Blue Sox (48-56) began the day in fifth place, percentage points behind the Racine Belles (49-57) for the final playoff spot.

Fort Wayne finally broke through in the top of the seventh. Callaghan reached on a bunt single with one out before she swiped second and third – her fourth and fifth stolen bases of the game.18 One out later, Penny “Peanuts” O’Brian (later Cooke) singled to left field to drive in Callaghan and give Fort Wayne a 1-0 lead.

Wiltse kept the Blue Sox off the scoresheet in the bottom of the seventh to preserve the Daisies’ victory. She finished with a two-hit shutout, earning her 28th win of the season.

The 22-year-old Callaghan scored what turned out to be another important run in the first inning of the second contest. South Bend’s Mary “Bonnie” Baker tied the game, 1-1, by scoring an unearned run in the bottom of the fourth. But rain halted play at the start of the sixth inning, denying South Bend a chance to salvage the nightcap. The washed-out game was never completed (or replayed).

The Blue Sox were eliminated on the final day of the regular season, finishing just a half-game behind Racine for the final playoff spot. There was no question that the suspension of two key pitchers down the stretch had cost South Bend dearly,19 but Callaghan’s performance on August 31, combined with the bad weather that left the second game unresolved, helped seal the Blue Sox’ fate.

Callaghan won the batting title with a .299 average,20 which was 25 points better than the runner-up, Dorothy “Dottie” Kamenshek of the Rockford Peaches. Callaghan led the league in doubles (17), total bases (156), hits (122), and games played (111), while finishing second in stolen bases (92) and runs scored (77). She also tied Faye “Tiger” Dancer for the league lead with three home runs.

Fort Wayne, with a 62-47 record, finished in second place and faced Racine in the first round of the playoffs. Aided by Wiltse’s two pitching victories, the Daisies defeated the Belles three games to one.

In the best-of-seven championship series, Rockford’s Carolyn “India” Morris and Olive Little were nearly untouchable on the mound, and the Peaches won in five games. Callaghan led the Fort Wayne offense with a .400 batting average and five stolen bases in the series.

The loss to Rockford was the beginning of a bad habit for Fort Wayne. The Peaches went on to win four playoff championships (1945, 1948-50) and each time they defeated the Daisies in the final round. Despite never winning it all in the postseason, the Daisies had a successful 10-year run in Fort Wayne, winning three regular-season titles (1952-54) and making the playoffs eight times.

Helen returned to Vancouver after the 1945 season and married Bobby Candaele.21

In 1946 the league made several rule changes, including introducing side-arm pitching, reducing the ball size from 11½ to 11 inches in circumference, increasing the distance of the pitching rubber to 43 feet from home plate (previously 42), and lengthening the basepaths from 68 to 72 feet. Callaghan Candaele (as she was known in 1946) continued to reach base at a healthy clip – she walked 73 times in 399 at-bats – and stole a career-high 114 bases. Her batting average dropped to .213, which was still second best on the Daisies.

She gave birth to her first son, Richard, in late July 1947. After sitting out that season, she returned to face yet another set of significant changes to the game. The league implemented overhand pitching in 1948, in addition to shrinking the ball to 10⅜ inches and moving the pitching rubber 50 feet from home plate. For the first time in her career, Callaghan Candaele struck out more times than she walked, and her batting average dipped to .191 on July 20. She was removed from that night’s home game against South Bend and a short time later underwent emergency surgery for an ectopic pregnancy, which abruptly ended her season.22

Less than four months later, the Daisies traded her to Kenosha in return for 20-year-old outfielder Jean Smith.23

If the league had a Comeback Player of the Year Award, it likely would have been bestowed upon Callaghan Candaele in 1949. She removed any doubt about her ability to hit overhand pitching by finishing seventh in the league with a .251 batting average. She was also among the league leaders in doubles (9), triples (5), total bases (113), and steals (65), earning her a spot on the second all-star team in a vote by the league’s managers.24

Helen retired from the AAGPBL after the 1949 season, returning to Vancouver to raise a family and help her husband with his taxi business. The family moved to California in 1956. 25

She passed her knowledge of the game on to her five sons, two of whom went on to make an impact on the sport. In the late 1980s, Helen’s son Kelly Candaele co-produced a documentary called A League of Their Own, featuring her and many other former AAGPBL players.26 The documentary served as inspiration for Penny Marshall’s 1992 movie of the same name, which was a smash hit and taught younger generations about the women’s professional league.27

Helen’s youngest son, Casey Candaele, went on to have a nine-year major-league career with the Montreal Expos, Houston Astros, and Cleveland Indians. Growing up in the 1960s and ’70s, he didn’t think it was out of the ordinary to be getting baseball tips from his mom. “I just thought everybody’s mom was out there throwing BP, hitting groundballs and playing catch,” he said.28 As of 2021, they were the only mother-son combination to play professional baseball.

Helen was posthumously inducted into the Canadian Baseball Hall of Fame in 1998 as a member of the pioneering group of 68 Canadian women who played in the AAGPBL. On November 16, 2021, she became the first woman inducted individually into that venerated sporting institution.

In addition to the sources cited in the Notes, the author consulted AAGPBL.org, The All-American Girls Professional Baseball League Record Book, and Ancestry.com. Box scores and standings were referenced in the Kenosha Evening News, South Bend Tribune, and Racine Journal-Times. 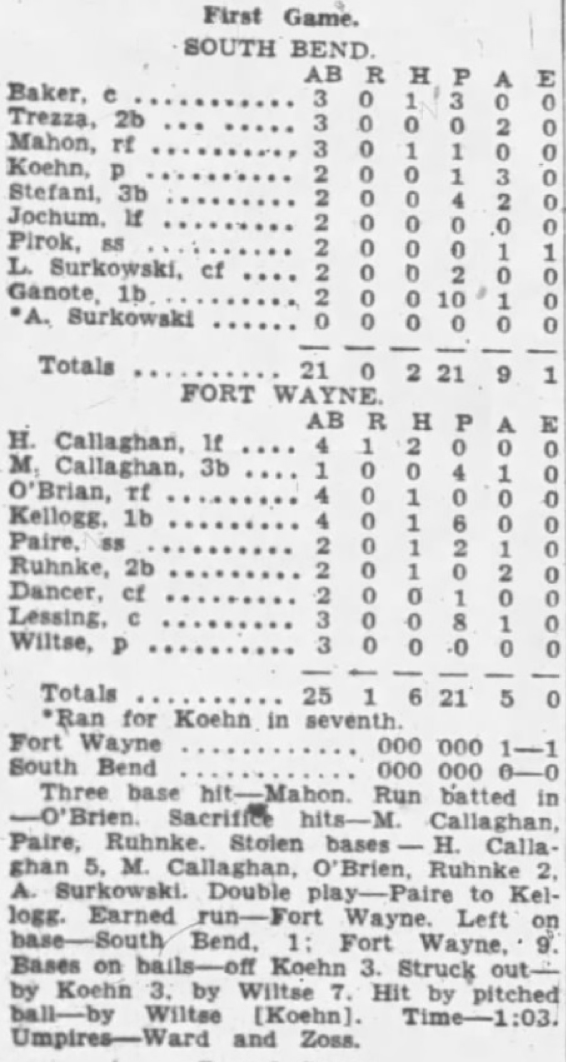 7 The AAGPBL remained a six-team circuit in 1945. The Milwaukee Chicks also experienced attendance issues in 1944; they were moved to Grand Rapids, Michigan, for the 1945 season.

15 First baseman Gertrude Ganote (later Weise) was also pressed into service as a pitcher. Koehn went 2-4 with a 1.90 ERA in seven appearances at the tail end of the season, while Ganote went 2-2 with a 4.42 ERA in 10 appearances. Koehn was used primarily as a pitcher in 1946 and 1947. She continued to pitch into the 1950 season.

18 Fort Wayne stole nine bases in the game on the battery of Koehn and Baker. Koehn had limited experience in holding runners on base.