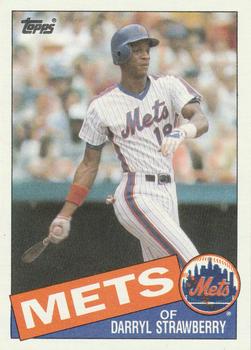 Darryl Strawberry struggled early in the 1985 season. He injured his hand on May 11 when he made a diving catch and tore a ligament in his thumb. The injury forced him to miss seven weeks. He was still voted to the National League All-Star team that year. (He seemed embarrassed by his selection.) Strawberry was an essential cog in the Mets lineup and was clearly missed. The Mets had a losing record during his absence and fell into third place in the NL East Division.

When Strawberry returned at the end of June, the Mets went on a tear, winning 23 and losing just 11 to climb back into first place. Hubie Brooks perhaps said it best after the Mets swept a series against his Expos: “He’s like Andre Dawson is to the Expos: We can’t win without him. The Mets can’t win without Straw. When he was hurt, they lost. When he came back, they won.”1

Baseball was bracing for another strike and that was on everyone’s mind as the Mets took the field on a warm, sunny day at Wrigley Field. A crowd of 34,167 showed up with the hope of seeing their team begin to turn their season around. The Cubs had lost seven of their 10 games against the Mets so far in the season, including the previous two games. Cubs manager Jim Frey gave the ball to Derek Botelho. It was his first start since he was called up at the end of July.

Botelho had surrendered two first-inning walks, one to Keith Hernandez, who had been chosen the NL Player of the Month in July, and the other to Gary Carter when Strawberry stepped to the plate. Strawberry blasted a 2-and-2 pitch into the right-field bleachers to give the Mets a 3-0 lead. Mets manager Davey Johnson was not surprised, saying, “Darryl is capable of this type of thing on any given day.”2

Ed Lynch, who had won his four previous starts, took the mound for the Mets. Lynch had defeated the Cubs on June 18, pitching a complete game in the Mets’ 5-1 victory. He kept the Cubs’ bats in check for the first three innings before Bob Dernier singled. Lynch got Gary Matthews to ground into a double play to maintain his shutout.

When Strawberry came to bat in the third inning, he again faced Botelho with two outs. Botelho got ahead on the count at 1-and-2 before Strawberry hit his second home run of the game. This one landed in the center-field bleachers to give the Mets a 4-0 lead.

The Mets knocked Botelho out of the game in the fifth. After giving up a leadoff double to Wally Backman, Botelho intentionally walked Strawberry. When Danny Heep doubled to score Backman and Strawberry, Frey replaced Botelho with Lary Sorensen, who got the final out on a force out to the shortstop.

Jody Davis got the Cubs on the scoreboard in the bottom of the inning when he hit a solo home run over the right-field fence. It was Davis’s 10th home run of the season and his first RBI of the season against the Mets.

Ron Meredith took over pitching duties for the Cubs in the seventh. With two outs, Meredith faced Strawberry. Strawberry showed that it didn’t matter who the Cubs sent out to face him as he hit his third home run of the game. This one, his 15th homer of the season, was a blast that wasted no time going over the center field fence.

With his shutout gone, Lynch settled down and did not give up another run until the eighth inning. After surrendering consecutive singles to the Cubs’ Ron Cey and Larry Bowa to start the inning, Lynch gave up a sacrifice fly to Dernier that scored Cey. Johnson wasted no time in calling on Roger McDowell to get the final out. McDowell gave up one more hit in the ninth before getting Davis to ground out for the Mets’ 62nd win.

Strawberry was delighted with his effort, telling sportswriters, “It was a great game for me. I just hope it’s not the last. I’m in a groove right now.”3 But the looming strike was still on everyone’s mind as evidenced by Strawberry himself, who tempered his accomplishment with these words: “When I went up there today, I didn’t think about it maybe being my last game of the season. A strike is going to hurt the fans and it’s going to hurt the players.”4

The game was significant for the Mets beyond Strawberry’s accomplishment. The win, along with St. Louis’s 9-1 loss to the Phillies, put New York in first place by a half-game. It provided a hedge against a prolonged strike that could shorten the season. But the Mets had momentum and Johnson was concerned that a strike would take it away. “The mood of our team is not good; it`s not favorable, This is not a good time for this to happen to us.”5

After the game, Johnson tried his best to keep his players focused on their winning ways. He told them to look at the win as if “it was just another day at the office,” although he later told them that if there was a strike, they needed to “keep [their] arms in shape. Don’t get out of shape, because I’ll run your backs off when we resume. It’ll be a three-day track meet with seven-hour drills.”6

From Chicago the team flew to Montreal, where they waited for word about the contract negotiations. A strike began but the Mets would not need to worry about facing Johnson’s drills, because it lasted only two days (August 6 and 7). When the season resumed, the Mets played one game in Montreal, beating the Expos, before heading back home to face the Cubs again.