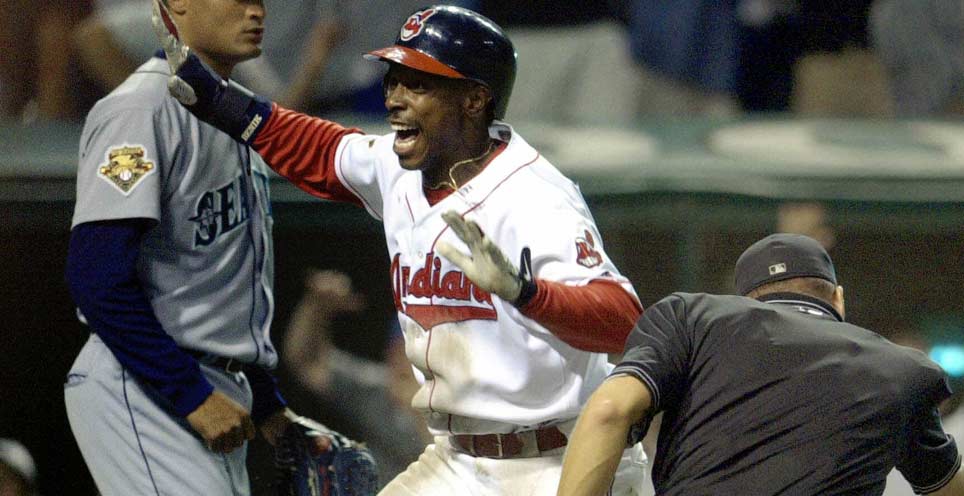 Perhaps the greatest story line during the 2001 season was the Seattle Mariners. Building on the previous season, when they took the New York Yankees to six games in the American League Championship Series, the Mariners waltzed through their 2001 schedule with grace and precision. They had a winning record against every AL opponent, and did not post double-digit losses in any month.

These were the new Mariners, as the Seattle faithful watched their favorite players depart from the Great Northwest. Gone were Ken Griffey Jr., Alex Rodriguez, Randy Johnson, and Tino Martinez. Only Edgar Martinez, Dan Wilson, and Jay Buhner, in a diminished role, were left from those great Seattle teams of the mid-1990s.

A rookie sensation, Ichiro Suzuki, joined Seattle from Japan. The presence of the 27-year old was immediately felt: He batted over .300 in the first three months of the season, including .379 in May. A left-handed batter who slashed line drives, he led off for manager Lou Piniella’s squad and once on base he was a threat to steal at any moment.

Bret Boone, Mike Cameron, John Olerud, and Martinez backed Suzuki and the Seattle lineup was well-balanced between hitting for power and hitting for average.

The mound corps was led by a young hurler from Venezuela named Freddy Garcia. The third-year right-hander was joined by veteran pitchers Aaron Sele, Paul Abbott, and Jamie Moyer.

The Cleveland Indians were also a team in transition in 2001. Manny Ramirez had signed with Boston, and he was replaced by Juan Gonzalez. Marty Cordova was the new left fielder and Einar Diaz replaced longtime backstop Sandy Alomar Jr. Their infield was still one of the best in the majors with third baseman Travis Fryman, shortstop Omar Vizquel, second baseman Roberto Alomar, and first baseman Jim Thome.

The pitching staff was led by a talented rookie, C.C. Sabathia. The big left-hander was the club’s first-round pick in 1998 and made a steady rise through the minor leagues before arriving in the big leagues. The Cleveland pitching staff offered few soft spots with veterans Dave Burba, Chuck Finley, and Bartolo Colon.

Both teams were in first place in their divisions as the Mariners invaded Cleveland for a four-game series in early August. Their battles for a division crown were polar opposites. The Mariners had a commanding 20-game lead over Oakland while the Indians held just a half-game advantage over second-place Minnesota.

Seattle defeated the Indians in the first two games, 2-1 and 8-5. The third game was a Sunday night affair with 42,494 fans stuffing Jacobs Field and a national TV audience looking on. The pitching matchup featured Sele (12-3, 3.41 ERA) for Seattle and Burba (9-8, 6.21 ERA) for Cleveland. Sele had won his first eight games of the season (April 4 to May 31), while Burba had a five-game winning streak (April 17 to May 8).

After a scoreless first inning, the Mariners tagged Burba for four runs in the top of the second. Back-to-back doubles by Al Martin and Cameron accounted for the first tally. With two outs, David Bell walked. Tom Lampkin doubled, driving in Cameron and sending Bell to third. Suzuki’s single brought home the other two runs.

Seattle kept coming in the third. Consecutive singles by Martinez, Olerud, and Martin loaded the bases with nobody out. Cleveland manager Charlie Manuel went to his bullpen and brought in southpaw Mike Bacsik, who was making his major-league debut. Cameron smoked his second double, driving in two runs and sending Martin to third base. Carlos Guillen’s single to left scored both runners, and the Mariners had doubled their advantage to 8-0.

They were not done. Bell singled to left field and Lampkin was hit by a pitch. Suzuki knocked in Guillen with a fly ball and Mark McLemore walked to load the bases again. Martinez reached on an error by the usually dependable Vizquel, allowing two more runs to score. Olerud singled home McLemore to complete the scoring. Seattle sent 12 men to the plate, and scored eight runs. They now led the Indians by 12-0.

Thome smashed his 35th home run of the season, a two-run shot, in the fourth inning. Seattle got two more runs in the top of the fifth inning, and their advantage was again 12 runs, at 14-2.

The Mariners held that lead through the middle of the seventh inning. The fans who stuck around broke into a half-hearted rendition of “Take Me Out to the Ballgame.” Root, root, root for the home team sounded a bit silly at this point. It looked as if Manuel was waving the white flag when he removed starters Fryman, Gonzalez, Alomar, and Ellis Burks from the game.

Sele was sailing along but he surrendered a leadoff home run to Russell Branyan. Sele retired the next two batters, but then ran into trouble when Diaz singled and Kenny Lofton and Vizquel each walked. Piniella pulled the plug on Sele and brought in John Halama. The southpaw gave up a single to Jolbert Cabrera to score two more runs.

With the score 14-5, it seemed just a matter of time before Seattle would wrap up the game. But Thome socked his 36th homer in the bottom of the eighth. Halama then plunked Branyan and Cordova homered, and the score was now 14-8. Consecutive singles by Diaz and Lofton sent Halama to the showers and Norm Charlton emerged from the bullpen. Vizquel doubled, scoring Diaz. Lofton tried to score from third when a pitch got away from Lampkin, the Mariners catcher. But his throw to Charlton got Lofton, dousing the rally.

As the Indians came to bat in the bottom of the ninth, the five-run deficit seemed insurmountable. Ed Taubensee led off with a single. But Charlton retired Branyan and Thome and more fans took to the exits. Cordova doubled, and the Indians had runners at second and third with two down. Piniella again went to his bullpen and called on Jeff Nelson to shut the door. But the tall righty walked Wil Cordero to load the bases. Diaz followed with a single to left to score Taubensee and Cordova. It was 14-11.

Out went Nelson and in came Kazuhiro Sasaki, the Mariners closer, leading the team with 35 saves to this point in the season. Lofton singled to left to load the bases. Vizquel laced a 3-and-2 pitch down the right-field line, just past a diving Ed Sprague (who had entered the game as a pinch-hitter for Olerud) at first base. The ball caromed into the corner and Vizquel raced to third base. The three runners scored and unbelievably the game was tied, 14-14. “I told Omar that if Lofton got on base, and he was patient, he was going to hit a triple into the right-field corner,” Manuel said later. “Sasaki is real gutty. I knew if Omar waited on his split-finger, he’d eventually come inside with a fastball to challenge him.”1 Said Vizquel, “No doubt it was my biggest hit of the year.”2

The fans who were left broke out into bedlam. The 10th inning was scoreless. In the 11th Indians reliever John Rocker struck out the side, holding the Mariners scoreless for the sixth straight inning. Jose Paniagua entered the game in the bottom of the inning, Seattle’s sixth relief pitcher. After he got the first out, consecutive singles by Lofton, Vizquel, and Cabrera ended the drama at 12:11 A.M. Cabrera’s hit, a broken-bat single to left field, scored Lofton from second base for the winning run. Taubensee, who was on deck, lifted Lofton on his shoulders in a victory march to the third-base dugout.

“I got lucky,” said Cabrera. “I put the ball on the bat, and it broke the bat. … I think this can be the turning point of the season.”3

“The biggest lesson this game teaches you is to never give up and to keep on swinging,” said Manuel. “This may have been the best game I’ve ever managed. I took all my guys out and didn’t have any moves left to make.”4

Seattle took the fourth game of the series to win three of four. Seattle won 116 games in 2001, setting a record for the most wins in a 162-game schedule.

Both teams won their division titles, and met in the Division Series. Seattle won the series in five games. The Mariners’ season came to an end when they were again ousted by New York in the League Championship Series, this time in five games.

The author accessed Baseball-Reference.com for box scores/play-by-play information and other data, and Retrosheet.org.