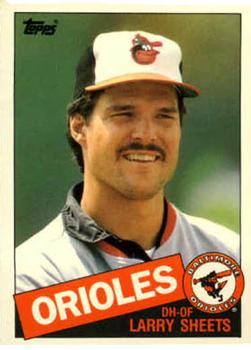 It’s not often that a team hits two grand slams in one game, but when the Baltimore Orioles turned that very feat in one inning against the Texas Rangers at Memorial Stadium on August 6, 1986, the hometown fans surely thought that the game had turned in favor of their team.

After Texas second baseman Toby Harrah’s grand slam in the second had given the Rangers a 5-0 lead, the Orioles scored nine runs in the fourth, when Larry Sheets and Jim Dwyer connected for Baltimore, and eventually totaled 11 runs in the game on only seven hits. Baltimore’s flurry of runs was due to both the largesse of the Rangers’ pitching staff, which issued 10 walks, and a key error by Texas third baseman Steve Buechele. With Baltimore leading 11-6 going into the eighth inning, Orioles manager Earl Weaver looked forward to a victory as well, but the Rangers stormed back for a 13-11 triumph, prompting Weaver to caution, “I had the feeling it was over, that’s a bad feeling to get in baseball. You should never feel that way.”1

Both squads were in the race for their respective division titles entering the game, with the Rangers trailing the California Angels by 2½ games in the AL West and the Orioles also just 2½ games in back of the Boston Red Sox in the AL East. The Rangers sent inconsistent rookie Bobby Witt, who would end up leading the American League with 143 walks, to the mound against Orioles starter Ken Dixon. Though both hurlers worked around a walk in the first inning, neither would pitch more than a third of the game.

Dixon’s troubles started in the top of the second when Gary Ward led off with a single and Larry Parrish followed with another hit. Dixon lost sight of the strike zone and walked Don Slaught and Buechele, the latter of which forced in Ward with the Rangers’ first tally of the day. Up to the plate stepped Harrah, who had been batting below .200 for much of the season. In spite of his struggles, Texas manager Bobby Valentine had decided a couple of weeks earlier to give the 37-year-old Harrah regular playing time. According to Valentine, he had called Harrah into his office. “I wanted to know if he had quit on the season,” Valentine said. “I wanted to know if he’d already tallied up the final stats on his career. He told me that he hadn’t. He told me he wanted to slap high fives and be part of the fun and that’s all I had to hear.”2

Harrah certainly enjoyed himself on this evening as he launched one of Dixon’s offerings over the fence for the first grand slam of the game. By the end of the night, Harrah would have a 5-for-5 batting line with three runs scored and four RBIs, falling a triple shy of hitting for the cycle while raising his season batting average 20 points to .218.

Harrah’s homer sent Dixon to the showers as Weaver trotted Odell Jones out to the hill in relief. Jones got out of the inning without allowing the Rangers to add to their 5-0 lead, though Texas did get to him for a run in the top of the third when Pete Incaviglia led off with a double and Ward followed with an RBI hit. Texas threatened to score again in the top of the fourth, but Jones escaped unscathed thanks to the only blight on Harrah’s day. Harrah led off with a single and went to second on Oddibe McDowell’s hit, but he was thrown out at home by right fielder Lee Lacy as he tried to score on Scott Fletcher’s flyball out.

Witt had managed to overcome the four walks he had issued over the first three innings, but he finally paid the price for his wildness in the bottom of the fourth. He walked the first three batters – Cal Ripken Jr., Dwyer, and Jim Traber – to load the bases. Sheets then socked Baltimore’s first grand slam of the day to bring the Orioles within two runs of the Rangers. After Tom O’Malley singled, Valentine put Witt out of his misery and sent Jeff Russell in to quell the uprising.

Russell, however, fared no better than his predecessor as he, too, had trouble throwing strikes. After walking Rick Dempsey, he induced popouts by Juan Bonilla and Lacy to Harrah at second base, but then he walked Fred Lynn and loaded the bases once more. Ripken reached base when Buechele booted his grounder at third, allowing O’Malley to score and keeping the bases full. Dwyer, who had been red-hot entering the game, took advantage of the situation by clearing the bags with Baltimore’s second slam, giving the home team a 9-6 lead. Dwyer now had 15 RBIs in his last nine games and eight homers in 116 at-bats, which was one more than he had hit in 233 at-bats the previous year.3 In the aftermath of the game, all Dwyer had to say was, “First grand slam … took me 12 years to do it.”4 The total of three grand slams in one game set a major-league record.

At this point, Mike Mason took over for Russell and retired Traber for the final out of the inning. Both teams took a break from scoring as Jones struck out the side in the top of the fifth and Mason retired the Orioles in order in the bottom of the inning.

Jones’s day came to an end after he allowed consecutive singles by Buechele and Harrah to open the top of the sixth. Brad Havens took over and retired two hitters before loading the bases with a walk to Pete O’Brien. Rich Bordi, Baltimore’s third pitcher of the inning, struck out Incaviglia to end the Rangers’ threat. Mason did not fare as well in the bottom of the frame as he issued a leadoff walk to Bonilla that Lacy followed with a home run to increase the Orioles’ lead to 11-6. Mason finished the inning without further trouble and Mitch Williams pitched a scoreless seventh for the Rangers before the Texas team’s comeback began.

Buechele, whose error had set up Dwyer’s grand slam, led off the top of the eighth with a home run off Bordi that sparked the Rangers’ offense back into action. Harrah and McDowell singled and, after Fletcher struck out, O’Brien mashed a three-run round-tripper that brought Texas to within one run of Baltimore. Buechele joked afterward, “I was the official starter for both sides tonight. I got them going and I got us going.”5 Indeed, the Rangers were not finished yet. Incaviglia and Ward got hits before Weaver finally removed Bordi in favor of Nate Snell. Parrish greeted Snell with a two-RBI double that gave Texas a 12-11 advantage before Snell got out of the inning courtesy of an unusual 2-5 double play on Slaught’s fly ball.

Bordi had taken his shellacking due to a taxed Baltimore bullpen that was missing injured relief ace Don Aase. Bordi understood the situation, saying, “I knew it had to be me, no one had to tell me. I knew I had to finish up. … I felt just as good in the last inning as I did in the first [when he retired the side in order]. But everything I threw up there got hit hard.”6

Dale Mohorcic pitched the final two innings for Texas to earn his fourth save while Williams earned his eighth win of the season. The Rangers added their final run in the top of the ninth when Harrah hit a one-out double and scored on Fletcher’s single to make the final score 13-11. Weaver tried to console his team, himself, and Orioles fans by commenting, “It’s just like a 1-0 loss, look in the paper: one more loss.”7

The Rangers, of course, had a different perspective on the game. Valentine enthused, “If that’s not the greatest Rangers victory ever, it’s tied for first.”8 The entire Texas squad was especially happy for Buechele’s role in the comeback, with O’Brien stating, “If anyone wanted to win this game, it was Boo (Buechele). We knew their bullpen was a little short and if we kept swinging the bat, we could get back in it.”9

The devastating loss was the first in what became a five-game Baltimore losing streak that started a tailspin from which the team never recovered. The Orioles posted a 10-19 record in August before losing 24 of their final 32 games in September and October to finish at 73-89, 22½ games behind first-place Boston.

Baseball-reference.com was consulted for the game box score and individual player statistics.

3 Tim Kurkjian, “Orioles Hit 2 Grand Slams – Lose, 13-11,” Baltimore Sun, August 7, 1986: 44. The article cited here states that Dwyer had 15 RBIs in his past seven games; however, baseball-reference.com’s statistical breakdown for Dwyer’s 1986 season shows that it actually took him nine games – between July 24 and August 6 – to accrue the 15 RBIs in question. See baseball-reference.com/players/gl.fcgi?id=dwyerji01&t=b&year=1986#1002-1010-sum:batting_gamelogs.