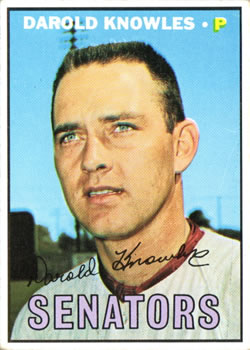 The slow climb of Gil Hodges’ Washington Senators teams had brought the 1967 squad to heights unknown: a 55-55 record after shutting out the Twins in Minnesota on August 7. None of the previous expansion Nats had reached .500 so far into the season.

A month earlier, on July 8, Washington’s record stood at 34-47, but winning 21 of 29 had pulled the team to break-even. The Twins cut the party short the next night, scoring a run in the eighth to beat the Nats, 3-2. Veteran Al Worthington, 38, relieved Jim Merrit and pitched two innings for the win. The two teams — the original and expansion Senators — matched up again on Wednesday evening, August 9, at Metropolitan Stadium. A crowd of nearly 17,000 came to see Twins right-hander Dave Boswell oppose Joe Coleman, a 20-year-old right-hander.

Shoddy fielding put Coleman in a hole in the first inning, even as he struck out the side. With runners on the corners, catcher Paul Casanova let a pitch get by him, then threw wildly to third. Two runners scored on the play. Another unearned run scored in the second when Senators third baseman Ken McMullen made an error on a ground ball by Rich Rollins.

Down 3-0, Hodges pinch-hit for Coleman in the top of the third. Reliever Bob Priddy yielded a run in two innings before Casey Cox gave up three more in his two innings. Surprisingly, the power-laden Twins scored six of their seven runs on singles, walks, and Washington misplays. The exception was Bob Allison’s triple after Harmon Killebrew’s third-inning double.

The Nats found themselves down 7-0 when they came to bat in the seventh. A hit batsman and a single by Casanova after a force out put runners on first and second. Both runners advanced on a slow grounder to third. With two down, shortstop Tim Cullen singled to center, scoring Washington’s first two runs. Twins manager Cal Ermer summoned Mudcat Grant in relief.

A 21-game winner in 1965, the soon to be 32-year-old Grant had been so ineffective earlier in the year that he was dropped from the rotation. This game did nothing to restore Ermer’s confidence in him. Pinch-hitter Mike Epstein greeted Grant with a single to left. Ed Stroud’s single to center scored Cullen with the third run. McMullen’s single to left scored Epstein with the fourth. Stroud beat a throw to third, with McMullen moving to second. Having seen enough, Ermer brought in Ron Kline. Kline had spent the previous four seasons as Washington’s most effective reliever before being traded to the Twins in December 1966. Perhaps Washington slugger Frank Howard had an idea of what Kline would throw. In any case, Hondo was ready for it. A three-run homer to deep center, his 29th, tied the game. The blast was estimated at 435 feet.1

“When you blow a seven-run lead with two out, something’s wrong,” Ermer said after the game.2

Howard’s blast set the stage for career performances by two relief pitchers, lefty Darold Knowles for the Senators and Worthington for the Twins.

Dick Lines, the fourth Washington pitcher, set down the Twins in order in the seventh. Kline started the eighth with a strikeout, but Casanova singled and Bernie Allen walked. The Twins had sent Allen to Washington as part of the trade for Kline. Ermer brought in Worthington, who retired the next two batters to end the threat.

Although Worthington began his career in July 1953 with back-to-back shutouts, he had been primarily a reliever since ’55. He last started a game in 1959. Little did he know that tonight would be his longest outing ever out of the bullpen.

Knowles, who relieved Lines in the eighth, was in for an even longer night. Already used mostly to close games, he had never pitched more than six innings since coming up with the Orioles in 1964. Although he would be used as an emergency starter with Oakland for two weeks in August 1973 — he even threw a complete-game shutout — this outing would remain the longest of his career.

Worthington worked out of a jam in the ninth. A leadoff walk and a one-out single put runners on the corners. But the veteran right-hander induced an infield foul popout and got the third out on a fly ball. He then retired 17 batters in a row before Howard led off the 15th with a single.

Knowles retired 10 in a row before back-to-back walks — one of them to Worthington, the last time he ever reached base — in the 11th. Knowles ended that threat by getting Tony Oliva on a foul pop to the catcher. After Killebrew singled leading off the 12th, Knowles retired 11 in a row through the 16th.

“I really didn’t get tired,” Knowles told reporters. “It was a cool night, and in about five or six of those innings, they went out 1-2-3. … I never was worried, but I did pitch carefully to Killebrew and Oliva. I never challenged them.”3 No doubt it helped that Killebrew was removed for a pinch-runner in the 12th.

Ted Uhlaender singled to lead off the bottom of the 16th. After a force-out grounder, 36-year-old rookie catcher Hank Izquierdo4 made his major-league debut, pinch-hitting for Worthington. The rookie, too, grounded into a force out. A fly ball ended the inning. Worthington departed after 8⅔ innings, having faced 30 batters, yielded two hits, and fanned eight. One of his two walks was intentional.

Lefty Jim Roland took over for Worthington in the 17th and retired the Nats 1-2-3 for three innings. Knowles, meanwhile, gave up a two-out single in the bottom of the inning before striking out his 10th batter, the last of the 34 he faced over 10 innings. He yielded three hits and walked two.

Righty Dave Baldwin, a 29-year-old rookie who had taken the loss the previous night, took the mound for Washington in the 18th. Baldwin would later earn a doctorate and become a college professor (and a SABR member), but for now he was a pitcher who threw mostly side-arm and underhanded with an occasional overhand curve. Rich Rollins had hit one of those curves for a game-winning homer the night before.5 Baldwin stayed away from that pitch this night, or as midnight passed, this morning. He retired the Twins in order in the 18th, but gave up a pair of two-out singles in the 19th before retiring the side on a popout to second.

Leading off the 20th, a weary McMullen hoped for the best. He had fouled out to first in the 17th   when he was late on a Roland fastball. “We were all getting tired, that’s for sure,” McMullen said after the game. “I know my bat was getting heavier and heavier every time I went up.”6 That likely worked to his advantage as Roland tried to fool him with a changeup. The Nats third baseman hit it out the park for his 14th homer.

“Roland had them eating out of his hand until that changeup,” Ermer said.7

Howard followed McMullen’s homer with a double and was bunted to third. A sacrifice fly brought him in with an insurance run.

Baldwin gave up a leadoff single in the bottom of the 20th but a strikeout and a fly out left the Twins’ hopes up to pitcher Jim Kaat as a pinch-hitter, the 21th player Ermer would use. (Hodges used 19.) Kaat flied out to right to end the game and give Baldwin his first major-league victory.

“You would have thought we had won the pennant,” Baldwin said of the back-slapping and cheering in the Senators’ dugout and clubhouse.”8

“I can’t remember a bigger victory,” Howard said. “If this game was any indication, we’ll go all the way,” an exuberant Cullen predicted, as Washington had climbed to within 6½ games of first place.9

The 20-inning marathon — 5 hours and 40 minutes, ending at 1:29 A.M. — would have been the longest night game in history up to then had the Nats not beaten Chicago in 22 innings on June 12.10 But Hodges knew this victory was more important: “It was a great comeback in a game which meant a lot, too. It’s more important than that 22-inning one.”11 A loss would have put his Nats two games under. 500, instead of back at the break-even mark.

By splitting the next four games, the Nats made it to the morning of August 14 as a .500 ballclub, at 58-58. But the World Series tickets some starry-eyed fans had begun to inquire about12 never needed to be printed. Washington won just 18 of its last 45 games to finish at 76-85, tied for sixth place with Baltimore. Still, this was the best finish yet for the expansion Washington franchise, six wins better than expected based on the team’s run differential.

The Twins came close to winning the pennant, finishing a game behind Boston. As meaningful as this game was for the Senators, it came to mean even more for Minnesota.

4 Izquierdo was a bullpen coach for the Cleveland Indians in 1962 after a decade in the minors before giving it another go as a player. He appeared in 15 more games for the Twins in 1967 after this one before returning to the minors. He later scouted for the Twins and Cubs.