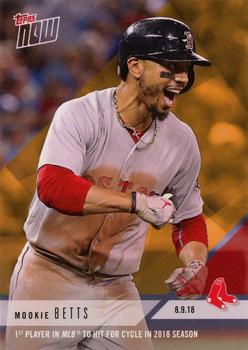 The Toronto Blue Jays hosted the Boston Red Sox in a three-game divisional series in early August 2018. The Red Sox had been in first place since June and were hot, having won 25 of their last 30 games. The Blue Jays were not so hot. They had lost 10 of their last 15 and found themselves 29 games back, in fourth place, in the AL’s East Division. Toronto had not been above .500 since mid-May.

Rookie left-hander Ryan Borucki started for Toronto. Borucki had been selected in the 15th round in 2012 by the Blue Jays and made his major-league debut on June 26 of this season in a start against the Houston Astros. This was his eighth start of the season, and he sported a respectable 2.30 earned-run average.

Rick Porcello started for the Red Sox, in search of his 15th win of the season. Porcello had won the 2016 American League Cy Young Award, bolstered by his league-leading 22 wins. In 2017 he had a league-worst 17 losses, and he served up 38 home runs, the most in the majors. Now he was close to top form again. Winner of his last three decisions, Porcello pitched a complete-game victory over the New York Yankees in his previous start, in which he allowed just one hit (a solo homer by Miguel Andujar) and struck out nine.

The two starters had faced each other at Boston’s Fenway Park on July 13. In that contest, Borucki yielded seven runs (four earned) on eight hits in three-plus innings pitched, while Porcello had lasted only two-plus innings, allowing eight runs (all earned) on seven hits. Each pitcher also allowed four walks.

Boston leadoff star Mookie Betts came into this game batting .340. The 25-year-old perennial Gold Glove and All-Star outfielder had been in the AL’s top 20 in Most Valuable Player Award voting every year since 2015, coming in as runner-up in 2016. Leading off the game, Betts grounded a single between short and third to get things started for Boston. Andrew Benintendi reached on a weak single to the shortstop, and two outs later, Xander Bogaerts walked on four pitches to load the bases. Eduardo Núñez followed with a line-drive single into short right field, plating both Betts and Benintendi. That gave the Red Sox an early (but short-lived) 2-0 lead.

Porcello struggled with his control, walking both Curtis Granderson and Devon Travis to start the bottom of the first. Justin Smoak singled to right; Granderson scored and Travis ended up at third. That extended Smoak’s hitting streak to a season team-high 13 games.1 Randal Grichuk’s grounder to short forced Smoak at second but allowed Travis to score the tying run.

In the second, with the scoreboard showing “deuces” (two balls, two strikes, two outs, top of the second, and the score tied 2-2), Betts smashed a ball that struck the center-field wall just a foot or so below the top. He ran easily to third base with a stand-up triple; it was his second triple of the series. However, Benintendi’s groundout to first baseman Smoak ended the inning, stranding Betts at third and squandering Boston’s chance to regain the lead.

The Blue Jays did not waste an opportunity in their turn at bat. Porcello walked Russell Martin and then gave up a single to Aledmys Diaz. With runners at the corners, Kevin Pillar grounded to third baseman Núñez, whose error allowed Pillar to reach and Martin to score the go-ahead run. Toronto added a tally in the third on Teoscar Hernandez’s 18th home run of the season, a solo drive with two outs that sailed over the wall in deep right-center. Coming into this at-bat, Hernandez had been 1-for-10 against Porcello in his career. Porcello struck out Martin to end the inning and then retired the side in the fourth, adding two more strikeouts.

Boston was quiet in the third and fourth innings, but Betts hit the outfield wall again in the fourth, when he roped a drive to the base of the boundary in left field for a two-out double. Benintendi grounded out to first again to end the inning, but Betts had hit safely in his first three at-bats, and it was only the fourth inning.

J.D. Martinez started the Red Sox attack in the fifth, hitting a one-out solo home run to deep left. After Bogaerts flied out, Núñez singled into right-center and stole second base. On the next offering from Borucki, Brock Holt grounded a single off the glove of diving second baseman Devon Travis, and Núñez scored. The game was again tied, 4-4. Holt was then picked off and caught stealing, pitcher to first to shortstop for the tag.

Toronto wasted no time in its next set of at-bats. Travis singled up the middle and scored on Smoak’s double. Grichuk lined a home run to left (his 16th), and Toronto led 7-4. That was the end of Porcello’s time on the mound. Right-hander Brandon Workman entered in relief for the Red Sox. It was his second appearance of the series. He faced just three batters, yielding a single but then getting a fly out and a double play in his 10 pitches.

With a three-run lead, Toronto manager John Gibbons called on Jaime Garcia to pitch in the sixth. If the lead held, Borucki would earn the win. Garcia retired the first two batters on four pitches, bringing up Betts. Betts worked a full count before drawing a walk. Benintendi stranded Betts for the third straight time by grounding out to first unassisted for the inning’s final out.

Toronto added another run in the bottom of the sixth. Hector Velázquez was now pitching for the Red Sox. Travis’s single to left drove home Granderson, who had doubled down the right-field line before him. Benintendi’s throw to catcher Sandy Leon was too late to catch Granderson, but Travis tried to advance to second base on the throw. Leon threw to second baseman Holt, who applied the tag on the sliding Travis. Umpire Ed Hickox called Travis safe. Red Sox skipper Alex Cora challenged the play, and after review, the decision was overturned. Travis was called out, ending the inning.

Toronto held the 8-4 lead into the top of the ninth. After Jackie Bradley Jr. flied out, Betts worked a full count before blasting a pitch over the Toronto bullpen for a solo home run. With his 27th home run of the season, he had hit for the cycle. Benintendi and pinch-hitter Mitch Moreland each struck out, sealing the Blue Jays’ 8-5 victory.

Boston was defeated for the first time in August. Porcello had now allowed 15 runs in two losses to the Blue Jays, on 13 hits (four of them were home runs) and seven walks. Borucki got the win, evening his record at 2-2.

This was Betts’s fifth four-hit game of 2018.2 With the cycle, he accounted for three of Boston’s four extra-base hits. His teammates urged him on in accomplishing the rare feat throughout the game. After the game, Betts told reporters, “I had plenty of guys letting me know what I needed, but we were losing the game and I wanted to do what I could to win the game, so I was just trying to get on base.”3 Someone asked Betts whether it was harder to hit for the cycle in baseball or roll a perfect game in bowling (which Mookie had also done). He responded, “Great question. I’m going to say the cycle is harder than a perfect game.”4

Betts and Martinez were front-runners for the league’s MVP Award, and each strengthened his case in this game.6 Martinez launched his 35th home run of the season. Betts raised his league-best average to .347 and his OPS jumped to 1.103. Gibbons remarked, “I don’t know if you can [stop Betts from hitting], especially because he’s hot. He’ll take his walks, too. I mentioned to [Toronto pitching coach] Pete Walker on the bench that you kind of have to hope he just hits it at somebody.”7

For video highlights of Betts’s accomplishments in the game, see https://www.mlb.com/video/betts-hits-for-the-cycle-c2366209483.

1 Smoak raised his batting average to .265, where it peaked before ending the season at .242.

6 Betts was named the Most Valuable Player in the American League at the end of the 2018 season, receiving 28 of 30 first-place votes. Martinez finished fourth in the voting.