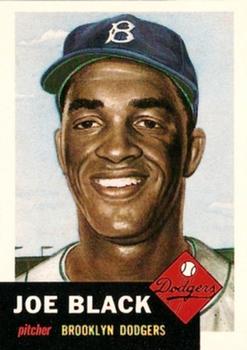 On paper, Brooklyn’s pitchers didn’t match up well with the well-seasoned New York Yankees staff, particularly when it came to postseason experience. Dodgers starters had only two career World Series wins. Preacher Roe had one and Ralph Branca, who wouldn’t even pitch, had the other. On the other hand, the Yankees’ top three pitchers had won 10 games in the fall classic. Their Game One starter, Allie Reynolds, had four wins, while Vic Raschi and Ed Lopat had each won three.

Manager Chuck Dressen’s solution to his team’s pitching conundrum for Game One was to start a rookie right-hander who had been used as a reliever for most of the season. Joe Black was one of Brooklyn’s best pitchers all year, going 15-4 with a 2.15 ERA in 56 games, 54 of which were in relief. Black’s two starts came in his final two appearances of the season. Dressen’s logic was that if he threw Black in the first game, he’d have the option of using him in relief or starting him again, depending on how the Series unfolded. “If that guy pitches the way he has pitched all season, our chance is as good as theirs,” Dressen said the day before the opener.2

The young hurler seemed unfazed by his starting assignment against a team attempting to win its fourth consecutive World Series, and its first since Joe DiMaggio retired. “These aren’t the same Yankees I first saw when they had DiMaggio, (Tommy) Henrich, and (Charlie) Keller,” Black said. “They’re wearing the same letters on their shirts, but I don’t believe they frighten anybody.” He added, “They’re a good ballclub – hope nobody thinks I’m knocking them – but the Dodgers seem to me to be a pretty good ballclub, too.”3

A huge crowd of 34,861 saw Brooklyn open the scoring in the second inning. Jackie Robinson hit one of Reynolds’ sliders “in a long white loop which rode with a tailwind into the delighted laps of the distant patrons. They lifted hats, threshed arms, windmill fashion, clasped hands in congratulations or shook fists encouragingly at their hero, who circled the bases at a sedate trot.”4 It was Robinson’s first home run in World Series play.

The Yankees answered right back in the top of the third when Gil McDougald led off by hitting one just over the left-field wall. The ball cleared the fence so narrowly that Dodgers left fielder Andy Pafko argued that a fan in the front row had reached over and interfered. His protest came to no avail and the game was tied. Black rebounded from the homer by striking out the next three batters.

The top of the fourth inning was rather eventful, even though the Yankees failed to score. Phil Rizzuto led off with a single. Mickey Mantle bunted up the third-base line and beat Black’s throw to first. Yogi Berra hit a groundball to first baseman Gil Hodges, who threw to Pee Wee Reese at second for the force. Mantle’s hard slide into second successfully broke up the double play but injured Reese in the process. The Dodgers shortstop was able to stay in the game with a thigh bruise. Joe Collins then hit a fly ball to right fielder Carl Furillo, who “fired the blurred white spec (sic) to the plate” as Rizzuto reversed course and scampered back to third, just beating catcher Roy Campanella’s throw.5 Black was then able to get Irv Noren to ground out to Robinson to end the inning.

Brooklyn’s defense was sensational in the fifth inning. After McDougald led off with a walk, Billy Martin looped a single into left. Pafko charged it and fired to third. Billy Cox took the throw and slapped the tag on McDougald for the first out of the inning. McDougald later claimed Cox missed him. “He hasn’t tagged me yet,” the Yankees third baseman said after the game.6 Pafko’s tremendous throw stood out on the play, as did Cox’s play on the receiving end. “The tag that Cox made after Pafko’s great throw on Martin’s single in the fifth inning was one of the great plays of the game,” Robinson said. “Billy had to come down fast with that tag to get McDougald, and if he hadn’t made it that might have been a big inning for the Yankees. They’d have had men on second and third and nobody out.”7 Reynolds grounded harmlessly to Reese for the second out. Pafko then made his second great play in three batters, a “sliding, sitting catch of Hank Bauer’s difficult Texas Leaguer” to end the inning.8

Collins just missed hitting a two-run home run in the top of the sixth when his deep drive “curved foul by inches.”9 In the bottom of that frame, Duke Snider, who’d already doubled earlier in the game, came up with Reese on base. He sent “the little white ball arching against the blue sky past snapping flags and billowing bunting” over the scoreboard and onto Bedford Avenue, to give the Dodgers a 3-1 lead.10

The top of the seventh provided more eye-popping defense from Cox. Black walked Noren to lead off the inning as the Brooklyn bullpen began warming. McDougald hit a groundball to Cox, who made a great stop when it took a bad hop and turned it into an around-the-horn double play. The next batter, Martin, hit a sharp grounder down the third-base line; Cox made a “breath-taking backhand stop” and threw it to first for the out.11 “You writers call him the best fielding third baseman around,” Reese said after the game. “Listen, he’s the best fielder, period. I don’t care whether he’s playing third, second, or shortstop, he’s the best fielder in the major leagues no matter where he plays.”12

Gene Woodling, who didn’t start because of a pulled thigh muscle, helped produce another run for the Yankees when he pinch-hit in the eighth inning. Woodling hit a ball off the center-field wall and was able to go into third standing up with a triple. He scored on Bauer’s fly ball to cut the Dodgers lead to one at 3-2.

Reese got the run back in the bottom of the eighth. The Dodgers shortstop lined a ball into the left-field seats to put Brooklyn ahead 4-2 and finish the scoring for the day. Black retired the side in order in the ninth, striking out Noren looking to finish the game and give the Dodgers a one-game-to-none lead in the series.

After the game, both managers raved about Brooklyn’s amazing glove work. “That fellow at third (Cox) did pretty good in a game that had plenty of good fielding, I’d say,” Yankees manager Casey Stengel remarked. “He came up with a couple of nice ones on McDougald and Martin in the seventh.”13 An exuberant Dressen exclaimed, “How about that defensive play of ours? Ever since I’ve managed this club everybody has talked about how great the hitters are, but nobody said anything about their fielding, which rates with any team in history, if you ask me.” He added, “The throw and sliding catch Pafko made. Furillo’s throw and Cox’s tag on Pafko’s throw and those two plays of his in the seventh – going to his left for the double play and spinning around to his right for the third out, they don’t come any better than that.”14

In his complete game, Black allowed two runs on six hits and two walks, while striking out six. He became the first African-American pitcher to win a World Series game. Campanella noted that Black was effective even though he didn’t have his best stuff. Black admitted that despite his confidence the day before the game, he felt the pressure of pitching on the big stage. “I was nervous before the game and I stayed nervous,” he said. “I’ve been faster and my control wasn’t too sharp but I felt stronger as I went along.”15 Even without his best stuff, the Yankees were impressed with the Dodgers hurler. “You have to hit against him to believe how good he really is,” Rizzuto said.16

Dressen’s strategy of using his recently converted reliever to start Game One had seemingly paid off, with Brooklyn grabbing an early Series lead and his best pitcher ready to pitch again in whatever role his manager asked. “Black will be there tomorrow if I need him,” the Dodgers manager said. “He’s ready to pitch all the time or any time.”17

17 Roscoe McGowen, “Brooklyn’s Defensive Stars Get Big Share of Credit for Victory in Opener.” Black started two more games in the Series, but never pitched in relief. He took the loss in Game Four, even though he allowed only one run on three hits and five walks over seven innings. He also took the loss in Game Seven, when he allowed three runs in 5⅓ innings.