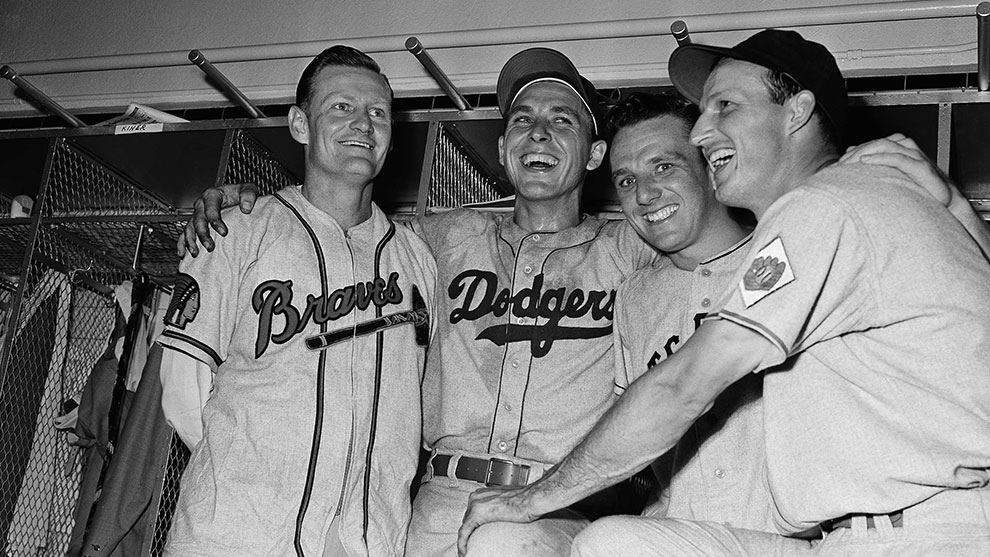 Ralph Kiner had an idea what might be coming as baseball’s stars gathered in Detroit, even if the sporting world at large had yet to figure it out.

In the summer of 1951, the American and National Leagues were still perceived as playing a different type of game. The junior circuit, in its 50th year of existence, was all about power. It was Babe Ruth’s league, even three years after his death. The senior circuit, through 75 years of history, was still viewed in some quarters as if the Deadball Era remained in full force.

Dueling columns that ran in the Detroit Free Press the day of the 1951 All-Star Game bore that out. George Kell of the Tigers lauded the NL’s fine pitching staff, to be led by Robin Roberts for the second consecutive year.

Kiner, though, offered up some friendly advice for the public and his opponents:“I just want to give you Detroit fans and you American Leaguers a few tips: You’re going to see one of the all-time greats in Stan Musial, a terrific competitor in Jackie Robinson and a fine home-run hitter in Gil Hodges. The National League starting team is loaded with power.”1

Once the 18th midsummer classic got underway, the Pittsburgh slugger’s words would be borne out.

The idea had been for All-Star week to serve as a jewel in a yearlong celebration of Detroit. Baseball’s grand showcase had been ticketed for Shibe Park in Philadelphia that year, but the Motor City’s civic leaders and Tigers owner Walter O. Briggs had appealed to baseball officials to make the game a centerpiece of the 250th anniversary of the city’s founding.2Both leagues’ owners agreed to the switch at the 1950 winter meetings.3

As game day approached, though, the mood was far from festive. The Tigers limped into the All-Star break in fifth place at 34-38. And their beloved broadcaster and former outfielder, Harry Heilmann, was too sick to carry out his duties as part of the NBC-TV broadcast team appointed by Commissioner A.B. “Happy” Chandler.4

Heilmann, 56, had been diagnosed with lung cancer that spring and his health had deteriorated quickly. Still, the baseball world was stunned when word made its way through the streets and hotels of Detroit that Heilmann had finally succumbed at Henry Ford Hospital around 8 A.M. on the eve of the big game. “HARRY HEILMANN IS DEAD” read the banner front-page headline on that afternoon’s Detroit News, which included a tribute by one of Heilmann’s closest friends, longtime News sports editor H.G. Salsinger.5But the pall cast by the four-time batting champion’s passing might have been best summarized by a visiting writer, Burton Hawkins of the Washington Evening Star: “He was too early to play in an All-Star game, but in death he dominates this one.”6

Inside the ballpark the day after Heilmann’s death, players from both leagues joined 52,075 fans in a minute of silence requested by public-address announcer Eddie Fitzgerald. Bob Murphy described the scene in the Detroit Evening Times: “Inside the sacred walls of a church, on such an occasion, you might have expected to hear a baby cry or a man cough or someone drop the prayer book. But not at Briggs Stadium in the mass testimonial to Harry Heilmann. You couldn’t hear a sound.”7

When the moment had passed, Heilmann’s 64-year-old former outfield mate Ty Cobb delivered a ceremonial first pitch from the front row of the stands and it was time to play ball.

Toeing the mound for the first official pitch was American League starter Ned Garver of the Browns. In typical fashion, St. Louis had managed only 22 wins in the first half, but Garver had recorded 11 of them. His All-Star status moved more than one scribe to observe that this was the first time he had pitched with a real major-league team behind him.

Though Garver’s worthiness was universally acknowledged (he would finish second to Yogi Berra in MVP voting that year after winning 20 games on a last-place team), the same could not be said about the rest of Casey Stengel’s pitching staff. The American League owners had put in place a rule requiring that its eight-man staff for the game include one hurler from each team — no more, no less.8That left Stengel with options such as Bobby Shantz of the A’s (7-6, 5.32 ERA) and 40-year-old Connie Marrero of the Senators, while the likes ofBob Feller andAllie Reynoldssat at home.

Garver, at least, was up to the task. He started the AL off by allowing a lone unearned run in three innings of work, as a Nellie Fox error allowed the visitors to push a run across in the opening frame. The Americans got that one back in the second, though, when Berra singled and Ferris Fain brought him all the way around on a triple to right.

But the day began to crumble when Stengel brought in the lone Yankee pitcher, Eddie Lopat, to start the fourth. Stan Musial, the leading vote-getter heading into the game,9 parked Lopat’s first offering in the upper deck in right field and the gates were open for manager Eddie Sawyer’s NL sluggers. Lopat was fortunate to retire Jackie Robinson on a deep drive to left-center, but Gil Hodges followed with a single and Bob Elliott of the Braves drove him in with a homer that just cleared the wall in left, putting the NL up 4-1.

The hometown Tigers’ two starters, Vic Wertz and George Kell, brought the fans back to life with solo homers off Sal Maglie in the fourth and fifth innings, respectively, while Detroit pitcher Fred Hutchinson shut down the NL in the fifth after replacing Lopat. But that was the end of the positive news for fans of the old English ‘D.’

The Dodgers stepped to the forefront the following two innings, as Robinson opened the sixth with a walk and Hodges, who led the majors with 28 homers heading into the game, unloaded on Hutchinson to bump the NL edge up to 6-3. In the seventh, Robinson’s bunt single scored Richie Ashburn and the rout was on.

Ashburn also was responsible for two defensive gemsin the game, throwing Fain out at home plate in the second inning and later going to the wall in deep right-center in the sixth to rob Wertz of his bid for another homer. Kell, who knew the ballpark better than anyone playing in it that day, called Ashburn’s grab “as fine a job of defensive play as you’ll ever see. He went back awfully fast and timed his leap perfectly to cut off what could have been a home run.”10

The final blow to American League pride came in the eighth, when Kiner took Mel Parnell deep to left for his third All-Star home run in as many years. That was also the sixth round-tripper of the game between the two teams, establishing a record that still stood as of the 2014 All-Star Game—though it has been matched twice, including in 1971, the next time the game came to Detroit.

The National League’s power had carried the day and would be the talk of the sport as the second half of the season resumed. The senior circuit had prevailed in the All-Star Game for the second consecutive year but only the sixth time in 18 games overall, and the victors reveled in the new order that had been established.

“It is the National that has the home-run hitters now, not the American,” Gil Hodges said afterward. “Yes, sir, times have changed.” Added Kiner, happy to be proved right: “We’re the big guys now and they are the little boys. I could see that before the game when we lined up for the national anthem. I looked over at the American League bunch and thought: ‘Gee, what a bunch of little guys compared to a few years ago.’ For the first time our boys looked like the big men.”11

9 Musial’s 1,428,383 votes beat out second basemen Nellie Fox (1,419,428) and Jackie Robinson (1,412,144) for popularity honors. (The Sporting News, July 11, 1951.) Robinson’s popularity was the strongest indication of how much the game had changed since Detroit hosted an all-white collection ofstars 10 years earlier. He was joined in this game not only by Don Newcombe, Roy Campanella and Larry Doby, but also by Cuba’s Minnie Minoso and Connie Marrero and Chico Carrasquel of Venezuela (who was voted the AL starter at shortstop by the fans, edging out Phil Rizzuto).