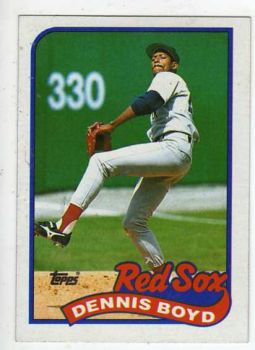 The 1986 season began with low expectations for Red Sox fans as the team was predicted to be mired in mediocrity. Once the season commenced however, even the most pessimistic Red Sox fan started to believe this could be the year…or at least began to take notice of this team. Dwight Evans hit the first pitch of the season for a home run in Detroit. On a frigid night on April 29th Roger Clemens struck out 20 batters, a major-league record. Two weeks later, on May 15 the Red Sox took over sole possession of first place. And then in a sign Red Sox management were serious about winning, veteran 300-game winner Tom Seaver was acquired from the Chicago White Sox on June 29th for utility man Steve “Psycho” Lyons.

On July 10, 1986, the Red Sox were eight games ahead of the New York Yankees. But it had been a chaotic day in Boston. On this day, the highly emotional and unpredictable Red Sox pitcher Dennis “Oil Can” Boyd, in the midst of a strong season with an 11-6 record, became furious that Royals manager Dick Howser had left him off the American League All-Star team. Boyd threw an expletive-filled tirade in the Red Sox clubhouse as players and manager John McNamara attempted to calm him down. But it didn’t help. Boyd stormed out, yelling at the media, “Get the (bleep) out of my face,”1 and headed for his home in Chelsea, Massachusetts.

The buzz around Fenway Park concerned the whereabouts of Oil Can as the Red Sox-Angels game got under way. Talk of Boyd came in the midst of an almost playoff-like atmosphere as both teams were leading their divisions.

An unearned run by the Angels in the top of the second inning was matched by the Red Sox in the bottom of the inning as Rich Gedman doubled home Dwight Evans. The Angels countered with two runs in the top of the third inning as Gary Pettis doubled home Dick Schofield, and then scored on a Wally Joyner single. Angels pitcher Ron Romanick carried a 3-1 lead into the sixth inning.

Meanwhile, Oil Can Boyd was parked in his gray Olds Cutlass on a hill in Chelsea, Massachusetts, watching the sunset over the Boston skyline. Some fans pulled up in their car, and surprised to see Boyd sitting there, asked why he wasn’t at the ballpark. Others offered to give him a ride to Fenway. Boyd would have none of it. “They screwed me, man, they really screwed me … I should have been on it (All-Star team), and I should have been on it last year, too. I want my reward and I want it today. Roger Clemens didn’t get there by himself, you know … I don’t know when they’ll see me again.”2

Boyd’s tirade continued as he talked about going back to Mississippi or pitching in Japan. He was convinced he deserved an all-star selection based on his good record while pitching at Fenway. Eventually though, as Oil Can always did, he calmed down and started to see things more clearly. “I just hope my teammates and the management will understand,” he said contritely. “I’ll just try to take this thing in stride, but tomorrow I’ll be back in the clubhouse bright and early, ready to go.”3

Across the river, the Red Sox had to play catch-up against the Angels. In the bottom of the sixth inning Bill Buckner hit a two-run homer and Jim Rice followed with a triple to center. Rice later scored on a Dwight Evans single and the Red Sox now had a 4-3 lead.

Red Sox starting pitcher Al Nipper surrendered the lead in the top of the eighth inning as Wally Joyner doubled and scored on a Brian Downing single. The game was tied 4-4 and would stay that way until the top of the 12th inning.

With two outs in the top of the 12th inning Mike Brown relieved Steve Crawford, who left the game with shoulder pain. Wally Joyner tripled to center as Ed Romero stumbled in the outfield. Romero, a utility infielder, was making his first and only appearance of the season in the outfield because Kevin Romine, who had started in place of an injured Tony Armas, had been lifted for a pinch-hitter. Ironically, Romero had made a great game-saving catch in the 11th-inning. Joyner scored on a wild pitch followed by walks to Brian Downing and George Hendrick. RBI hits by Rick Burleson and Bobby Grich gave the Angels a 7-4 lead going into the bottom of the twelfth.

Marty Barrett led off against Mike Cook and hit what was ruled an infield single but actually was a line drive dropped by Bobby Grich. With two out Jim Rice homered into the screen in left field to cut the lead to 7-6. Cook got Don Baylor to hit a foul popup to third base in what should have been the final out, but the wind blew the ball back fair and it was dropped by Rick Burleson. The Red Sox still had life. Dwight Evans walked, and then Rich Gedman fouled off five straight 1-and-2 pitches before reaching on a broken-bat single to right field, scoring Baylor with the tying run and sending Evans to third.

Gedman recalled, “I was behind in the count, but I kept swinging until I finally got a pitch I could hit. We were down three runs going into the inning. But nobody on our bench gave up.”4

Dwight Evans said of Gedman’s at-bat, “It was one heavenly hit. Geddy battled him. But it was more like a war. Pitcher against hitter. I’m happy for the folks who stayed around. They saw something special.”5

The relay throw from Ruppert Jones on Gedman’s hit was muffed by Wally Joyner and runners were now on second and third. Angels manager Gene Mauch made a pitching change, bringing in rookie Todd Fischer. Fischer stared into catcher Bob Boone for the sign. The Fenway faithful, anxiously awaiting the pitch to Rey Quinones, were thrown into confusion as play was suddenly halted.

Immediately catcher Bob Boone jumped up and started screaming at home plate umpire Joe Brinkman. As Brinkman waved Dwight Evans home, fans erupted in celebrated at the realization Brinkman had called a balk on Fischer, and the game was over in a wild finish.

“He started his right hand and then stepped off. I just saw it and I called it,” Brinkman commented after the game.6

Angels manager Gene Mauch agreed it was a balk, but said “Even if he (Fischer) did, the umpire had no business calling it because nobody in the ballpark knew it but him.”7

“I can’t believe he called a game on something like that,” Bobby Grich said about the call by Brinkman. “Not on a balk. Make him get a hit or give us another chance. You don’t lose a game because a guy moves his hands one inch apart.”8

Naturally, Red Sox manager John McNamara had a different interpretation of the finish. “I’ve never seen a wilder inning with two out. I’m very proud of these players. They had a tough day and showed a lot of character.”9

For a day which began in a surreal environment, it was fitting that it would conclude with a four-hour, 27-minute game which Mike Penner of the Los Angeles Times said “set new standards of the bizarre, stretching reality to the brink of science fiction.”11

Red Sox fans could catch their collective breath – this was the season of destiny. The Red Sox could overcome mistakes…late inning deficits…and AWOL pitchers, while finding extraordinary ways to win.

This article appeared in “The 1986 Boston Red Sox: There Was More Than Game Six” (SABR, 2016), edited by Leslie Heaphy and Bill Nowlin. Read more game stories from the book at the SABR Games Project by clicking here.

In addition to the sources cited in the text, the author also used baseball-reference.com and retrosheet.org.