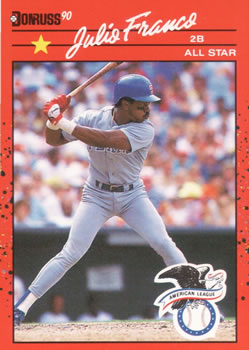 The crowd at Wrigley Field wore slickers and raincoats. Some held red, white, and blue folding umbrellas with the Chicago Cubs logo. Others sported smaller, hands-free umbrellas on their head. “What’s a little rain,” Greg Gumbel asked the television audience, “when there’s an All-Star Game to be played?”1

Baseball’s midsummer showcase returned to Wrigley Field in 1990 for only the third time. The previous classics had been held in 1947 (a 2-1 American League win) and 1962 (a 9-4 AL win), both of those day games, of course. President John F. Kennedy threw out the ceremonial first pitch in 1962.

The 1990 All-Star Game, played on July 10, had been awarded to the club 28 months earlier. Commissioner R. Bartlett Giamatti called Chicago’s mayor shortly before the decision with the promise of the All-Star showcase if city council voted to approve night baseball.2

The demand for tickets was intense. About 16,000 were allocated to Cubs season-ticket holders, while another 13,000 were distributed among other teams, corporate sponsors, and Major League Baseball. The remaining 6,000 tickets were available to regular fans by lottery. The club got several hundred thousand postcards for those seats.3 In the end, 39,071 fans squeezed into the old ballpark, built in 1914.

The expectation was for a high-scoring game in the ancient bandbox. On game day itself, however, the regulars knew home runs were unlikely. “Not on a night like this,” Ryne Sandberg said.4 He had won the home-run derby the previous night, but figured wet weather and winds gusting in from Lake Michigan were going to keep balls within the playing area of the Friendly Confines.

As public-address announcer Wayne Messmer called out introductions, the Wrigley faithful saved their biggest roar for a familiar figure. “Batting second and playing second base, making his fifth consecutive All-Star start, the National League’s top vote-getter, from the Chicago Cubs, Ryne Sandberg!” The infielder, wearing his familiar number 23, doffed his cap and shook hands with manager Roger Craig of the San Francisco Giants before smacking leadoff man Lenny Dysktra on the butt, the cheer lasting 40 seconds. The crowd roared again for Andre Dawson, appearing in his seventh summer classic. It was the outfielder’s 36th birthday and he marked it by completing negotiations with Cubs brass, who made him the highest-paid Cub in history.5 It was reported Dawson would make $3.3 million for the following season with an option for 1992. He was batting .324 in 78 games at the All-Star break with 19 homers and 57 runs batted in.

The ceremonial first pitch of the 61st All-Star Game was thrown by Ernie Banks, who had played in 14 classics. Mr. Cub was accompanied to the mound by a granddaughter.

In the broadcast booth, Jack Buck called the game and Tim McCarver offered analysis for CBS Television. Eighteen cameras were positioned around the historic ballpark, but, as it turned out, the poor weather and a slow start to the game took the spirit out of the broadcast early in the proceedings.6

Jack Armstrong (11-3) of the Cincinnati Reds started on the mound for the National League. He induced speedy AL leadoff man Rickey Henderson to fly out to Dawson in right. Wade Boggs got the game’s first hit on a nubber with topspin that third baseman Chris Sabo couldn’t corral. José Canseco struck out and the half-inning ended when Cal Ripken’s bouncer to Ozzie Smith at shortstop led to Boggs being forced out at second.

Bob Welch (13-3) of the Oakland A’s had a similar opening as the starting pitcher for the American League – Dykstra flied out, Sandberg grounded out to third, Will Clark singled to center and the inning ended with Kevin Mitchell striking out.

So it went. In the top of the second, Ken Griffey Jr. fouled out to left on a liner; Mark McGwire struck out; Sandy Alomar Jr., whose brother would play second base for the other side in the game, popped out in foul territory to first.

In the bottom of the inning, Dawson grounded out to Welch; Sabo grounded to short; Mike Scioscia lined out to left, completing two opening innings as dreary as the weather.

Ramon Martinez replaced Armstrong to start the third inning, enlivening the game by walking Steve Sax, who then stole second base. A groundout and a strike out were followed by an intentional walk to Boggs (the first issued since the 1985 All-Star Game), the rally snuffed when Canseco grounded into a force out at second base.

It was a good night for pitchers. Montreal’s Dennis Martinez and Frank Viola of the New York Mets each kept the scoresheet clean for an inning apiece. Dave Smith of Houston was touched for a one-out single in the sixth by Boggs, who lined the ball to right. Kelly Gruber replaced Boggs and took second when Canseco walked. George Bell, pinch-hitting for Ripken, struck out. Meanwhile, Gruber and Canseco pulled off a successful double steal, so Griffey was walked intentionally, and Smith was done. Manager Craig went to his San Francisco bullpen ace, young Jeff Brantley, 26, to face Cecil Fielder, who led the majors at the break with 28 homers, six ahead of runner-up Canseco. Fielder hit a towering fly to shallow center where a charging Dykstra caught the ball to end the bases-loaded threat. What should have been a routine catch was made more difficult by rain falling in Dykstra’s face as he pursued the ball.

After Boggs was pulled from the game, he said: “Someone will have to hit the ball 800 feet tonight to hit it out of here. I think it’ll take a squeeze play to get a run home.”7

On the visitors’ side, Toronto’s Dave Stieb, making a record ninth All-Star appearance for the AL, pitched two hitless innings, a walk to Tony Gwynn the only blemish. (Barry Larkin ran for Gwynn, stole second, and was stranded there when Sandberg grounded out to end the third.) Bret Saberhagen followed with two more hitless innings.

After six complete innings, only four singles had been hit.

Brantley returned to pitch the seventh. Sandy Alomar hit a grounder to Shawon Dunston, who fielded the ball at the edge of the outfield grass and had to make a long throw to first. Alomar awkwardly stretched to the bag for his second infield hit of the game. On a hit-and-run, he took third as Lance Parrish singled to right. The game was halted because of rain, the delay lasting 68 minutes. When play resumed, Rob Dibble had replaced Brantley. At the plate was Julio Franco, who, on an 0-and-2 count, slashed a Dibble pitch into the gap in right center reaching the ivy. Both runners scored and Franco stopped on second with a double, the game’s first and, as it would turn out, only extra-base hit.

Franco advanced when Ozzie Guillen grounded out second to first. Canseco hit a fly to Darryl Strawberry in right, who took a crow-hop before throwing the ball in the air to Scioscia, who blocked Franco from getting to the plate as he swung around to apply a two-handed tag to complete the inning-ending double play. The throw was later described as the most exciting play in a mundane game.

“I set up really well,” Strawberry said after the game. “It was right down the line. All I had to do is throw it straight and make the perfect throw.”8

As one might expect, Cubs announcer Harry Caray led the crowd in the singing of “Take Me Out to the Ball Game” during the seventh-inning stretch.

The AL bullpen mopped up in convincing fashion. Bobby Thigpen, of the South Side White Sox, who led the league in saves with 27 at the break, got three uneventful outs to shut down the NL for an inning. Chuck Finley of the Angels did the same. Dennis Eckersley got the assignment to close. He gave up a leadoff single to Dykstra, but then made short work of Roberto Alomar (fly out to center) and Matt Williams (strikeout). When Tim Wallach popped out to Fielder at first base, Saberhagen had the win, Eckersley the save, Brantley the loss, and the American League its third consecutive All-Star victory.

The night’s showing left Sandberg a career 2-for-20 in All-Star Games. The trio of Cubbies (Sandberg, Dawson, Dunston) went 0-for-7 on the night. Franco was named the most valuable player for knocking in the game’s only runs. The NL set a new mark by using nine pitchers.

What else? The National League roster included catcher Greg Olson, while the American Leaguers had pitcher Gregg Olson.

The shutout was the third in an All-Star Game since 1946 and the two-hitter orchestrated by six pitchers set a mark for the fewest hits allowed.

“Give our pitchers credit,” said AL manager Tony La Russa. “They were terrific.”9

This article appears in “Wrigley Field: The Friendly Confines at Clark and Addison” (SABR, 2019), edited by Gregory H. Wolf.