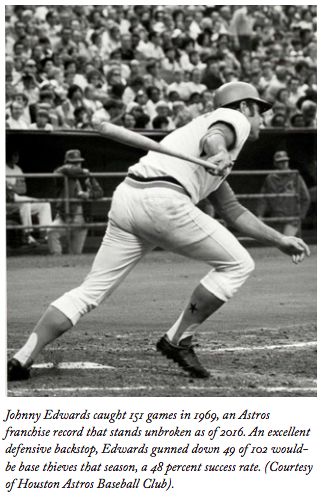 Two teams with a history of extra-inning games1 faced each other on a Saturday evening in the Astrodome and, after 4 hours and 14 minutes, the Houston Astros emerged victorious over the San Francisco Giants in 14 innings before the remnants of a crowd announced as 27,208.

Giants great Willie Mays stood atop the list of home runs by an active player, and was closing in on 3,000 career hits for his career. Though Mays had hit only 10 home runs at the Astrodome, four had been memorable. His 500th came there on September 13, 1965, off Don Nottebart and, on the very next night, number 501 tied a game in the ninth inning when the Giants were down to their last out. He had tied Mel Ott as the all-time National League home run king on April 24, 1966, with number 511, off Jim Owens, and number 550 had come off Barry Latman at the Dome on June 13, 1967.

The high-powered veteran offense of the Giants had not been performing up to expectations. In May, with a record of 19-23, the club’s brass sacked manager Clyde King and replaced him with Charlie Fox. The move yielded few immediate dividends. After defeating Houston 8-5 on July 10, the Giants, despite a four-game winning streak, were still in fourth place in the NL West and were 17½ games out of first. The Astros were in fifth place at the time and trailed the Giants by 7½ games.

Before the game, the only excitement figured to be that of the 39-year-old Mays chasing down posterity. But by game’s end, it was one of the least likely players on the field who would garner the headlines.

The Astros broke on top with single runs in the second and third innings off Giants starter Rich Robertson. In the second inning, after two-out singles by Houston pitcher Larry Dierker and former Giant Jesus Alou, Joe Morgan singled to left field to score Dierker. As he scored, Dierker stepped on the foot of Giants catcher Dick Dietz, spiking Dietz’s left toe and forcing him out of the game at the end of the inning.2 In the third, the Astros manufactured a run. After singles by Bob Watson and Denis Menke, Cesar Cedeno hit a comebacker that Robertson mishandled, loading the bases. A sacrifice fly off the bat of catcher Johnny Edwards brought in Watson with Houston’s second run.

Meanwhile, Dierker was virtually untouchable. A single by Mays in the first inning brought him within five of the magical 3,000 target, but through six innings, Dierker had allowed only one other hit and had retired 13 consecutive batters, a streak that started with the last batter in the second inning.

The Giants finally broke through in their half of the seventh inning. A leadoff single by Ron Hunt and a homer by Willie McCovey, his 23rd of the season, tied the contest, but the Giants were unable to do any further damage. Dierker got out of the inning by inducing Hal Lanier to ground out with runners on first and second.

Those spectators who hung around to get one last glimpse of Mays were not disappointed when the Giants center fielder led off the ninth inning with a home run that put the Giants in front, 3-2.  The homer off Dierker was the 619th of Mays’s career, and his 2,996th hit. All that remained was for Giants reliever Jerry Johnson, who had come on in the sixth inning, to put one more zero on the scoreboard.

But after Jimmy Wynn led off the inning with a fly ball to Mays, Bob Watson singled, and the managers went to work. Two players whose careers had begun on Brooklyn’s sandlots entered the game. Fox removed Johnson and gave the ball to Don McMahon, who at age 40 already had four wins and seven saves this season. Joe Pepitone, who had revolutionized hair care in the clubhouse during his days with the Yankees, also entered to pinch-run for Watson. Menke greeted McMahon with a triple to knock in Pepitone and the score was tied again. Cedeno struck out, then the Giants intentionally walked two batters to get to the pitcher’s spot in the Houston lineup.  The gambit worked as pinch-hitter Norm Miller, recently returned from Army Reserve duty,3 hit into a force play to send the game into extra innings.

Jim Ray came on to pitch for the Astros while McMahon stayed in the game for the Giants.  Innings 10 and 11 were scoreless. The fans also sat through a scoreless 12th inning as the Astros’ Fred Gladding and the Giants’ Mike Davison pitched out of difficulty. Davison struck out Cedeno with the bases loaded.

Bobby Bonds led off the top of the 13th inning with his 14th home run to give the Giants a 4-3 lead. Manager Fox entrusted the lead to Davison, a 24-year-old who came up in June and was appearing in his 10th major-league game. To this point, his major-league record was 0-2 and, even after pitching two shutout innings the prior evening, his ERA for the season stood at 9.00. Thus, nobody was particularly surprised when Doug Rader led off the inning with a double and advanced to third on a bunt single by Edwards, who was attempting to sacrifice but beat the throw to first base. Don Bryant pinch-hit for Gladding and his groundout scored Rader with the tying run and advanced Edwards to second base.

The unusual continued as Alou’s groundball to the left side hit Edwards as he ran to third base and Edwards was ruled out. After that, things really got dicey. A single by Joe Morgan and a walk to Wynn resulted in Davison having his second bases-loaded situation in as many innings. He escaped again – barely – thanks to second baseman Bob Heise’s leaping catch of Marty Martinez’s blooper to short right field and the game continued into the 14th inning.

Pitcher Jim Bouton entered the game for the Astros in the 14th. He had come back from obscurity the previous season to appear in 73 games with the Seattle Pilots and the Astros. So far in 1970, he had made 24 appearances and had posted a 3-6 record. Bouton’s knuckleball danced away from the bats of John Stephenson, Al Gallagher, and Frank Johnson, each of whom made contact but were retired easily.

It was Houston’s turn to bat again in a game that had already seen 18 Giant names and an equal number of Astro names scribbled on the managers’ lineup cards. Houston had stranded 24 runners through 13 innings, leaving the bags full four times. Davison stayed in the game to pitch for the Giants, as he was due up second in the top of the 15th inning. Menke, who had already gone 3-for-6 in the game to raise his team-leading batting average to .314, led off and grounded out. In keeping with the theme of the inning, the play was somewhat unusual in that Menke’s line drive bounced off third baseman Gallagher and caromed to shortstop Hal Lanier, who threw Menke out. Cedeno singled to center field and advanced to third base on Rader’s single, the Astros’ record-breaking 21st hit in a home game. That brought up Johnny Edwards, who was in the throes of a miserable season, batting just .182. He sent a soft fly ball to Bonds in right field, and Cedeno, after tagging up at third base, dashed home with the winning run. Houston’s 25 men left on base were a major-league record for a game of 14 innings or less, yet the Astros had still managed to win the game.

The win went to Bouton, his fourth and last win of the season. Any of Bouton’s feats on the mound would soon be overwhelmed by the publication of Ball Four, his telling and sometimes irreverent look at baseball that he wrote while pitching with Seattle and Houston during the 1969 season. His good fortune in getting this win led Wells Twombly of the San Francisco Chronicle to note, “Mark Twain never had such luck.”4 Bouton would win only one more major-league game. He retired after 1970 but made a comeback attempt with the Braves in 1978, going 1-3 in five games.

Willie Mays, in the twilight of his career, reached the 3,000-hit plateau a week after the game in Houston. His ninth-inning homer was his final one at the Astrodome.

In addition to sources cited in the Notes, the author used Baseball-Reference.com and the following: