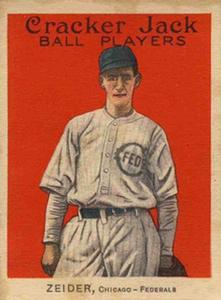 June 1914 had seen the Indianapolis Hoosiers go on the longest winning streak in the history of the Federal League, winning 15 games in a row from the 11th through the 24th, which propelled them to a half-game lead over the ChiFeds going into July 2, 1914. The winning streak had moved the once lowly Hoosiers from seventh place to first in the course of a month. Much of this success was due to the play of veteran first baseman Charlie Carr, right fielder Benny Kauff, and catcher Bill Rariden.

Between July 2 and 12, Indianapolis played two series against Chicago. This marked an important time for both clubs, given that they were each other’s most serious competitors for the pennant. In the first series between the Hoosiers and ChiFeds, Chicago took three out of the four games and regained first place. Chicago then strengthened that lead with a trip to Kansas City, where they took three out of four games and jumped to a four-game lead going into the series at Weeghman Park against the Hoosiers. The first two games of this series were a split, with Chicago taking the first game and Indianapolis taking the second. The conclusion of the series was scheduled for the following day, July 12.

Max Fiske took the mound for the ChiFeds and George Mullin for the Hoosiers before a crowd of 11,000.1 Chicago scored in the second with a double over first by Dutch Zwilling, scoring catcher, Art Wilson from second. The Hoosiers tied it all up in the fourth. Bill McKechnie walked and was advanced to third on a single by Benny Kauff. McKechnie scored on a fielder’s choice, and Frank LaPorte got his first of two RBIs on the day.2

Indianapolis took the lead in the sixth with Kauff bunting for a base hit, followed by a triple by LaPorte scoring Kauff and a run-scoring single by Carr. In the bottom of the seventh, ChiFeds first baseman Fred Beck smacked his ninth home run of the season, bringing Chicago back within one. In an attempt to keep the rally going, Fisk was pulled for pinch-hitter Jim Stanley, but the Hoosiers managed to snuff the attempt and kept the one-run lead going into the eighth.

The eighth inning proved to be fruitful for Indianapolis against the ChiFeds’ new pitcher, Claude Hendrix, who was 13-5 so far. Center fielder Vin Campbell doubled, his 12th of the season. Kauff followed with a home run, putting the Hoosiers up by three runs.

Not to be deterred, the ChiFeds answered back with three runs in the bottom of the eighth. Shortstop Joe Tinker singled and Wilson knocked a round-tripper over the left-field fence. After the home run by Wilson, Earl Moseley replaced Mullin on the mound. Two batters later, right fielder Al Wickland singled and then went to third on a single by Beck. Wickland then scored on an error by center fielder Campbell who dropped Max Flack’s pop fly, and the game was tied.

Neither team scored in the ninth inning through the 12th, nor did the Hoosiers score in the top of the 13th.

In the bottom of the 13th, Moseley took the mound for his sixth inning of work. Dutch Zwilling singled for his third hit of the day and was sacrificed to second by Wickland. Fred Beck was intentionally walked. Flack flied out, then Moseley walked Hendrix to load the bases. Up to the plate came third baseman Rollie Zeider, who thus far had had a tough go of it at the plate, going 0-for-6. Zeider worked the count to three-and-two, waited for his pitch, and then won the game on a single to left.

Indianapolis won the second game of the doubleheader, Harry Billiard beating Mike Prendergast, 4-2. The Hoosiers’ loss put them three games behind first-place Chicago. These two series had been very important between these contenders, and had seemingly gone in Chicago’s favor, but Indianapolis had won two of the last three games, and finished the contest on an upswing. Indianapolis went on to win the championship by a game and a half over Chicago.