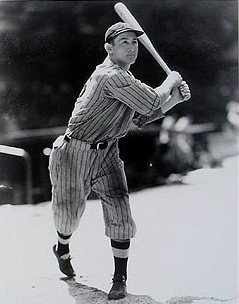 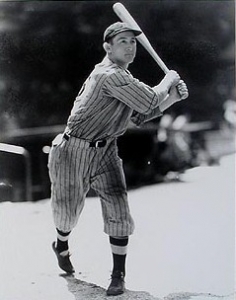 On July 12, 1938, approximately 10,000 fans entered Griffith Stadium to see their Washington Senators take on the league-leading Cleveland Indians. Just six days earlier, the 1938 All-Star Game had been held at Cincinnati’s Crosley Field. Washington’s third baseman Buddy Lewis and Cleveland’s center fielder Earl Averill had started in the midsummer classic for the American League, while Senators catcher Rick Ferrell was named as a reserve to the AL squad, which lost to the National League, 4-1. Neither Averill nor Lewis got a hit in the annual spectacle, and Ferrell did not get into the game at all. Yet on this warm, July afternoon in the nation’s capital, Lewis played a key role as the fourth-place Senators won in walk-off fashion over the Indians.

This was the first of a scheduled three-game series. The Indians had just completed a three-game sweep of the St. Louis Browns (all with one-run victories). The Senators had also just completed a series sweep, taking four games from the Philadelphia Athletics, including both ends of a July 10 doubleheader, as they outscored the A’s, 31-13.

Senators skipper Bucky Harris handed the ball to Ken Chase for the start. The left-hander was in his second full season in the big leagues and was still splitting time between starting and relieving. This was his ninth start of the season (and 15th appearance), and he brought a 2-5 record and an earned-run average of 6.60 with him. The visiting dugout also had pitching issues. According to the Tribune of Coshocton, Ohio, “Despite repeated failures and the subsequent weighty evidence that Denny Galehouse is not good enough to be a starting pitcher, Manager Ossie Vitt sent the big right-hander against the Senators.”1 Although Galehouse’s record was 3-3 and his ERA 3.51, this was just his fourth start of the season (and 16th appearance). His previous start, on June 23 against the Yankees, had lasted two innings, when he was tagged for four earned runs and homers by Lou Gehrig and Bill Dickey.

Cleveland scored twice in the opening inning before Chase recorded an out. Skeeter Webb walked and stole second base. Jeff Heath smacked a triple into left, driving in Webb, and then Odell Hale singled in Heath. Two runs on two hits. However, the lead was short-lived. Washington jumped on Galehouse from the get-go. George Case bunted a single to third. Galehouse then walked both Lewis and Sam West. Al Simmons lifted a fly ball to left that was deep enough for Case to tag and score. Lewis also tagged, moving to third. This proved pivotal, as Buddy Myer grounded out to the right side and Lewis scored the tying run on the play. To add to the Indians’ misfortunes, sometime in that first inning, Cleveland coach Johnny Bassler was ejected for “riding”2 first-base umpire Bill Summers.

With one out in the top of the second, Chase walked Rollie Hemsley and Galehouse, and Pete Appleton was called on to relieve him. However, “he was no roaring success,”3 serving up a double to Heath and a triple to Hale, and the Indians established a 5-2 lead. It didn’t hold, as Galehouse “was hammered off the hill”4 when the Senators took their swings in the bottom of the second. He faced only one batter. Jimmy Wasdell’s leadoff homer sent the Cleveland righty to the showers. This was Wasdell’s second home run in his last three games. Earl Whitehill came on to pitch for Cleveland.

In the next inning with one down, West reached on a single to center. An out later, Myer stroked a shot to center and raced around the bases for an inside-the-park home run, making the score 5-5. After that, Whitehill settled down, with no incidents in the fourth and only one run allowed on a triple by Lewis in the fifth inning.

The Cleveland bats would not give up, either. They scored two unearned runs in the fourth off Chief Hogsett. Webb singled with two down and Heath shot a grounder to third, but All-Star Lewis made his 17th miscue of the season, putting runners on the corners. Hale smacked a double to center, driving in both runners and reestablishing the Indians’ lead.

In the fifth Lewis atoned somewhat for his two-run error, when he tripled into the right-center gap and scored on West’s RBI groundout. The score was now 7-6, still in favor of the visitors.

Whitehill should have escaped the sixth without incident, despite a leadoff walk to Myer. However, with two outs and Travis on third, Ferrell hit a grounder to Hale at second, who fumbled the ball and Travis scored, again knotting the score. Hogsett followed with a triple into the right-field corner, giving the Senators an 8-7 lead. It was Hogsett’s first triple of the season and the second (and last) of his 11-year career.

Hale, referred to as Sammy in the papers, was leading his club offensively in the game, with a single, triple, and double in his first three at-bats. He had popped out to second in the seventh, but he had one more chance in the final frame. He swung at the first pitch to lead off the ninth and sent the sphere over Al Simmons’ head and into the left-field bleachers. The score was once again tied, now at 8-8.

Shirley Povich5 of the Washington Post characterized Hale’s dramatic ninth-inning home run as “a slight delay”6 in the Senators’ effort to achieve their fifth straight victory. After Odell tied the score in top half of the ninth, Washington came back in the bottom half “in a sort of bloodless uprising marked by only one hit, a bunt.”7 Bill Zuber walked Ferrell to start the inning. Vitt jumped out of the dugout and made a pitching change, bringing on Johnny Humphries, another fireballing rookie, from Cleveland’s bullpen. Hogsett bunted the ball between Humphries and third baseman Ken Keltner. Humphries lost his footing while trying to field the ball, and both runners were safe. Senators skipper Harris called for the next batter, Case, to sacrifice the runners along, but Humphries walked him, loading the bases with none out. Ossie Bluege was inserted as a pinch-runner for Ferrell. Then, “the 10,000 customers pleaded loudly for Buddy Lewis to produce some kind of a well-hit ball,”8 but Lewis whiffed at three straight fastballs for the first out. Humphries threw two pitches by West before the left-handed swinging center fielder “swatted a ball into left field.”9 Heath caught it and made a “none-too-capable throw to the plate,”10 not in time to get the tagging Bluege. With the walk-off sacrifice fly, the Senators’ win streak grew to five games.

Washington had scored nine runs on only seven hits. The Indians “contributed four runs to Washington by bad fielding and three more on bases on balls.”11 The Tribe’s quartet of pitchers allowed five free passes. Tribe manager Vitt told reporters after the game, “I’ve been in baseball for nearly 30 years and I’ve never seen as bad a defensive team as this one – either in the majors or minors.”12 The box score showed only one error, but “atrocious support [and] defensive laxness was extremely costly.”13 Fans and reporters feared that this loss “jolted the precarious pennant chances of the Cleveland Indians.”14 Galehouse did not start again for the Tribe until August 2, when he pitched a complete game against the Boston Red Sox, winning 7-4.

For Washington, a strong case could be made that Hogsett was the hero of the game for the Senators. He “entered the fray in the third inning and allowed but five hits,”15 earning his third win of the season. He also contributed a single and triple to the offensive attack. Eight different Washington batters had scored a run. Five of them had at least one run batted in, led by Myer’s three.

Hale was the only batter in the majors to hit for the cycle in 1938. It was the third such rare feat accomplished in Indians franchise history, coming five years after teammate Averill hit for the cycle (August 17, 1933, against the Philadelphia Athletics) and 35 years after Bill Bradley (September 24, 1903, against the Washington Senators). In a game where Hale stood out offensively, the Cleveland defense stole the show. However, hitting for the cycle extended Hale’s hitting streak to four games, and that streak would continue, reaching 19 games on August 2. His batting average rose from .275 to .305 during the streak, and his on-base plus slugging percentage (OPS) jumped from .709 to .796

5 In 1975 Povich received the J.G. Taylor Spink Award, the highest award presented to sportswriters by the Baseball Writers’ Association of America.