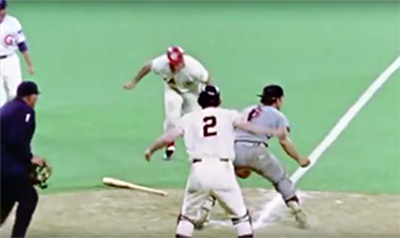 It was July 14, 1970, in Cincinnati, where the 41st Major League All-Star Game was played at the brand-new Riverfront Stadium in front of 51,838 fans. It was an era of turmoil. Just 2½ months earlier, President Richard Nixon had announced that the United States had invaded Cambodia to hunt out the Viet Cong in an attempt to hasten the end of the Vietnam War. On May 4 the Ohio National Guard had killed four students and injured nine during a protest march at Kent State University.1Fearing unrest and violence, Kent State, Ohio State University, and many other colleges had suspended classes and ended the spring semester early.

President Nixon happened to be at a governors’ conference in Louisville in mid-July and was encouraged by his son-in-law, David Eisenhower, to attend the All-Star Game.2 Despite the deaths at Kent State and the growing protests regarding his strategies in Southeast Asia, the president, wearing a fielding glove on his left hand and standing next to Commissioner Bowie Kuhn, threw out the first pitch. In fact, Nixon threw out two first pitches: one to Bill Freehan of the AL Tigers and one to Johnny Bench of the NL Reds.

After the opening ceremonies, the National League starters went onto the field to start the game. Morgana, the woman who would come to be known during the decade as the Kissing Bandit, made one of her first appearances by trying to jump over the fence in order to kiss catcher Johnny Bench. Cincinnati police quickly arrested her and she was later convicted of disorderly conduct. Morgana reportedly told the judge, “I just wanted to kiss Johnny Bench.” Judge Thomas Nurre replied, “It is up to Mr. Bench if he wants to be kissed, not you,” and then fined the young woman $25.3

The 1970 All-Star Game marked the beginning of a new era. Not only was it the start of a new decade, it was also the first All-Star Game played on artificial turf. Riverfront Stadium had just opened on June 30 and it was the crown jewel of sports stadiums. The Astroturf at Riverfront Stadium completely covered the field except for 20-foot-long and 10-foot-wide “sliding pits” surrounding each base and the home plate area.4 Pete Rose commented that players could run faster on the new turf, while Carl Yastrzemski believed it would help some players add 30 points to their batting average.5Just over 28 percent of all televisions in America were tuned into the game that night – more than half the TVs turned on. The game, broadcast by NBC, would be the high point for All-Star Game television ratings, as over 16 million households were watching the game. By comparison, the 2013 All-Star Game had a rating of only 6.9; just 7.5 million households were watching the game.6

The starting pitchers shut down their opponents in the first three innings. The AL managed only a first-inning single by Carl Yastrzemski, while the NL managed only a third-inning walk to Rico Carty and a single by Don Kessinger. The next two innings saw the Reds’ Jim Merritt and the Indians’ Sam McDowell continue the scoreless game.

In the sixth, San Francisco’s Gaylord Perry yielded the first run of the game, allowing a leadoff single by the Indians’ young star catcher, Ray Fosse, followed by a sacrifice bunt by McDowell and a two-out single by Yastrzemski. In the top of the seventh, Fosse came up again and hit a bases-loaded sacrifice fly that scored Brooks Robinson. In the bottom of the inning, Gaylord’s brother, the Twins’ Jim Perry, came into pitch for the AL. Perry started poorly by giving up a single to Mets shortstop Bud Harrelson and a walk to the Padres’  Clarence Gaston, then hit Dennis Menke of the Astros with a pitch. With the bases loaded and nobody out, NL manager Gil Hodges sent Giants slugger Willie McCovey in to pinch-hit for Gaylord Perry. McCovey hit into a double play as Harrelson scored the NL’s first run.

In the top of the eighth inning, Brooks Robinson tripled home two runs off the Cardinals’ Bob Gibson. Jim Perry and Gibson traded shutout innings and the game went to the bottom of the ninth with the AL ahead, 4-1. AL manager Earl Weaver brought in the A’s Catfish Hunter, who gave up a leadoff home run to the Giants’ Dick Dietz. Harrelson and the Astros’ Joe Morgan followed with singles. With one out and runners at first and second, Hunter was replaced by the Yankees’ Fritz Peterson. Willie McCovey greeted Peterson with a run-scoring single that sent the speedy Morgan to third base with the tying run and only one out. Peterson was replaced by fellow Yankee Mel Stottlemyre. Pittsburgh’s Roberto Clemente, pinch-hitting for Bob Gibson, hit a sacrifice fly to center field and the NL had tied the game.

The game remained tied until the bottom of the 12th. With two outs and no one on, Pete Rose and Billy Grabarkewitz (Dodgers) singled off the Angels’ lefty ace Clyde Wright. Then the play for which the game will be remembered took place. The Cubs’ Jim Hickman singled to center. Rose was running full-tilt from second base the moment the ball hit the bat. As the Royals’ Amos Otis fielded the ball and threw home, Fosse stood between home plate and Rose, waiting for the throw. Rose came in ahead of the ball by a moment, lowered his shoulder, and barreled into Fosse, knocking his mitt off and forcing the catcher to somersault on the ground across the plate. Rose touched home and scored the winning run while Fosse, with a separated shoulder, crouched in pain. Rose later told reporters that he started to slide, but that Fosse was set up in a location that gave the runner no route to the plate. In the replay, it appears Rose does prepare to slide headfirst and then changes course and runs into Fosse instead.

As the summer of 1970 continued after the game, student protests slowly dissipated while the Vietnam War went on for more than four more years, beyond Watergate and the resignation of President Nixon. One hundred and eight men who are considered Vietnam War veterans played major-league baseball. Most of them, like Ray Fosse, were in the Reserve. The list includes no one in the Hall of Fame. Several minor-league players died in the war. Giant’s farmhand Eddie Glinnen died in combat in 1970. One major leaguer was wounded, Roy Gleason, who played in eight games for the Dodgers in 1963 and earned a World Series ring. 7 He was drafted while playing minor-league ball in 1967, and was wounded by shrapnel in Vietnam. Thurman Munson, who did not participate in the All-Star Game in 1970 despite being named AL Rookie of the Year, attended Kent State in the late 1960s and was an Army reservist during the war.

Pete Rose played for another 16 years and holds the major-league record for career hits. Fosse, though, was never the same. Although he was an All-Star again in 1971, the catcher never again hit with the power he had shown during the first half of the 1970 season. As of 2016 he was a longtime broadcaster for the Oakland A’s.