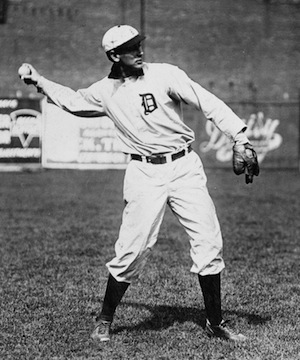 Detroit’s Bennett Park hosted a four-game series between the Senators and Tigers in mid-July 1909. Detroit won the first three games of the set, with the finale set for Friday, July 16. The Tigers began that day atop the American League, with a 50-28 record. Washington lay in last place, at 23-52. Detroit was pursuing its third straight pennant and, since the beginning of the 1907 season, had compiled a 41-13 record against the Senators.

Yet, a certain anxiety can stalk fans of a winning team, and it may have been evident in the stands that warm, sunny afternoon. Detroit had lost three of four games to Philadelphia immediately before the Senators arrived, and the Athletics had closed to within a half-game of the lead on July 11. The Tigers could not let up against the second division; 11 games with Philadelphia remained.

All the more reason the bugs focused on Ed Summers as he warmed up. As a rookie, in 1908, he had paced the Tigers’ staff with 24 victories. Yet by midseason 1909 his rheumatic knees threatened to shut him down. Summers had started only two of the Tigers’ previous 15 games, and had not looked particularly good in either. But one of these, on July 10, was the sole victory Detroit managed against Philadelphia in the previous series.1 Manager Hughie Jennings considered Summers his chief weapon against the Athletics; in the right-hander’s year and a half of major-league service, he had compiled a 9-1 record against the Mackmen.

Meanwhile, as badly as the Senators had stumbled, they weren’t lying down. At the end of the 1908 season, after the Tigers edged out the Naps (and the White Sox) for the pennant, ugly rumors surfaced from Cleveland. Namely, that the Senators, per the direction of manager Joe Cantillon, had not put forth their best efforts in a final series at Detroit.2In early July 1909, Cantillon announced “that for the balance of the season he will lose no opportunity to try out promising young players.”3 But wisely, the Senators’ skipper would not experiment in Michigan. The only non-regular in the Washington lineup that afternoon was rookie Speed Kelly, called up to replace an injured Wid Conroy at third base.

Granted, Washington’s offense was anemic: in 1909 the team finished dead last in the major leagues with 2.45 runs scored per game. (Combined, the leagues averaged 3.54 runs per game.) But their pitching staff showed some promise, and the Tiger faithful must have looked out with some concern at the two rookies Cantillon had throwing on the sidelines. Both came from the Pacific Coast League, changed speeds well, and could hit corners with biting curves. Right-hander Bob Groom, after losing 7-4 at Detroit on May 25, beat the Tigers 6-2 in Washington on June 12. Southpaw Dolly Gray had emerged as Cantillon’s first choice to counter the strong Detroit left-handed bats. Although he had won only once in his four starts against Detroit, Gray pitched well in each, including the 3-0 Tiger victory that opened the series three days earlier.4

Cantillon went with Gray. At approximately 3:30, with Tigers catcher Oscar Stanage and umpire John Kerin behind the plate, Senators left fielder George Browne stepped into the box to face Summers.

Browne flied out. Speedy Clyde Milan bunted his way on, and Jack Leliveltfollowed with a single. Detroit right fielder Ty Cobb made a “sensational catch” of Bob Unglaub’s “long foul, almost out of sight behind the first base bleachers,” with Milan and Lelivelt advancing.5Summers struck out Jiggs Donahue to retire the Senators.

Washington threatened again in the third. Leading off, Gray doubled past left fielder Matty McIntyre. Shortstop Donie Bush caught Browne’s liner. Gray had started to third, but Tigers second baseman Germany Schaefer wasn’t near his bag. “Bush started after Gray, made a flying dive and reached him, and had a double play all alone.”6 Milan grounded out to finish the half-inning.

After these early-inning hiccups, the fast-working Summers settled into an efficient groove. Although famed for his “fingernail” ball, a modern-day knuckleball under a different name, Summers didn’t throw the pitch exclusively, instead mixing it among his fastballs and curves.7

Gray was equally impressive. The only real threat he faced that day occurred in the bottom half of the first inning. McIntyre led off with a single, and was sacrificed to second by Bush. Sam Crawford followed with “a smash that threatened to be a home run” before going “just foul.”8 He then grounded out to second baseman Unglaub, and Washington catcher Gabby Street threw out Ty Cobb trying to bunt his way aboard.9

As the two pitchers cruised along, Summers started each inning by digging a hole on the slope of the pitcher’s mound for his front (left) foot to land in. Then Gray would kick dirt into the hole and stamp it down. “But in the ninth,” the Senators pitcher recalled, “I neglected to do this, and as he has a shorter stride than me, my right foot, after the first ball I pitched, landed right square in Summers’s pitching space, and I felt a sharp pain in my left side and thigh.”10

Gray managed a couple more pitches to leadoff hitter McIntyre, but after the third, “reeled and would have fallen, but for first baseman Donahue, who caught him in the arms.” After initially joshing the pitcher, but then seeing the legitimacy of his injury, “the Detroit fans rose in a body and cheered Gray” as he was assisted off the field.11 In his eight innings of work, the only hit Gray surrendered was McIntyre’s single in the first.

Groom took over, and promptly walked McIntyre. Bush bunted to move him to second, and Donahue couldn’t handle Street’s throw to first. Bush was safe, and Detroit had runners at first and second with none out. Crawford sacrificed the two runners over. Cobb hit a comebacker to Groom, who threw to home plate, where Street tagged out McIntyre. Groom then struck out Claude Rossman.

The affair thus moved into extra innings, and Summers continued to mow down the Senators. Only in the 12th inning did real difficulty arise. With two out and the fast Lelivelt on first, Donahue smashed a line drive to right. “Cobb tore in, staked all on a desperate plunge, and came up with the ball.”12

But Groom found himself in almost continuous trouble. In four of the five frames after the eventful ninth, Detroit runners got into scoring position. The finest opportunity came in the 15th inning. Stanage led off and singled, and Jennings sent Red Killefer in to pinch-run. Summers bunted, Groom picked up the ball and, aiming for the lead runner at second, unleashed a wild throw past the bag. Killefer scampered to third. Summers reached first.

With the bases loaded and none out, Bush popped up weakly to Kelly. Crawford grounded to Groom. The pitcher was a bit slow on the play and by the time he threw to the catcher, Killefer had apparently crossed the plate safe. Street, believing the game at last over, headed for the clubhouse. The Washington infielders and the Detroit baserunners also started off the field. But umpire Kerin stayed put “and when asked by the incoming players what was the matter, replied tersely, ‘Runner’s out.’”13 Everyone scurried back to their positions, the infielders unable (or unthinking) to double up any baserunner. Then “Cobb took three jerky, hectic swings” at Groom’s offerings, “and walked to the field, his head hanging.”14

As a “colossal joke” to cap the inning, one of the Detroit dailies was alerted to the winning run that wasn’t, and an extra edition proclaiming the Tigers 1-0 victors flew off the presses.15

In the next inning Detroit threatened yet again, with Rossman and Schaefer singling and standing on first and second with one out. Nothing came of it. The 17th and 18th innings were uneventful. By this point the fans, accustomed to seeing their high-octane offense bully opposing pitchers out of the box, saluted Groom’s resilience by cheering him when he came to bat.

After the 18th inning, and 3:15 of play, Kerin called the game. It was near 7 P.M., with enough light still to accommodate one, maybe two, more innings. Players from both sides were upset with the decision, probably none more than Summers, who had pitched the entire game for Detroit with nothing to show for it.

Washington’s Bob Unglaub spoke for many when he said, “Why do they want to keep us out here so long and then not let us have a chance to finish the game?”16The crowd of 3,078 streamed out of the park, back home towards cooling dinners, abuzz with talk of what they had seen. One of them, the great Sam Thompson, who starred for the Detroit Wolverines a generation earlier, remarked, “I never saw anything like it.”17

1 In addition to his 9-5 win over visiting Philadelphia on July 10, Summers lost 6-0 at Cleveland on July 6.

4 For background on Groom, see Catherine Petroski and John Stahl, “Bob Groom,” SABR Biography Project, http://sabr.org/bioproj/person/cbf60399, accessed September 11, 2014. For background on Gray, see “’Dolly’ Gray Declares the Terms are Satisfactory,” Washington Herald, February 9, 1909, 11.Gray’s previous starts against the Tigers: a 4-2 loss at Detroit on May 23, a 3-1 victory at Detroit on May 26, a rain-shortened five-inning 1-0 loss at Washington on June 14, and the 3-0 loss at Detroit on July 13.