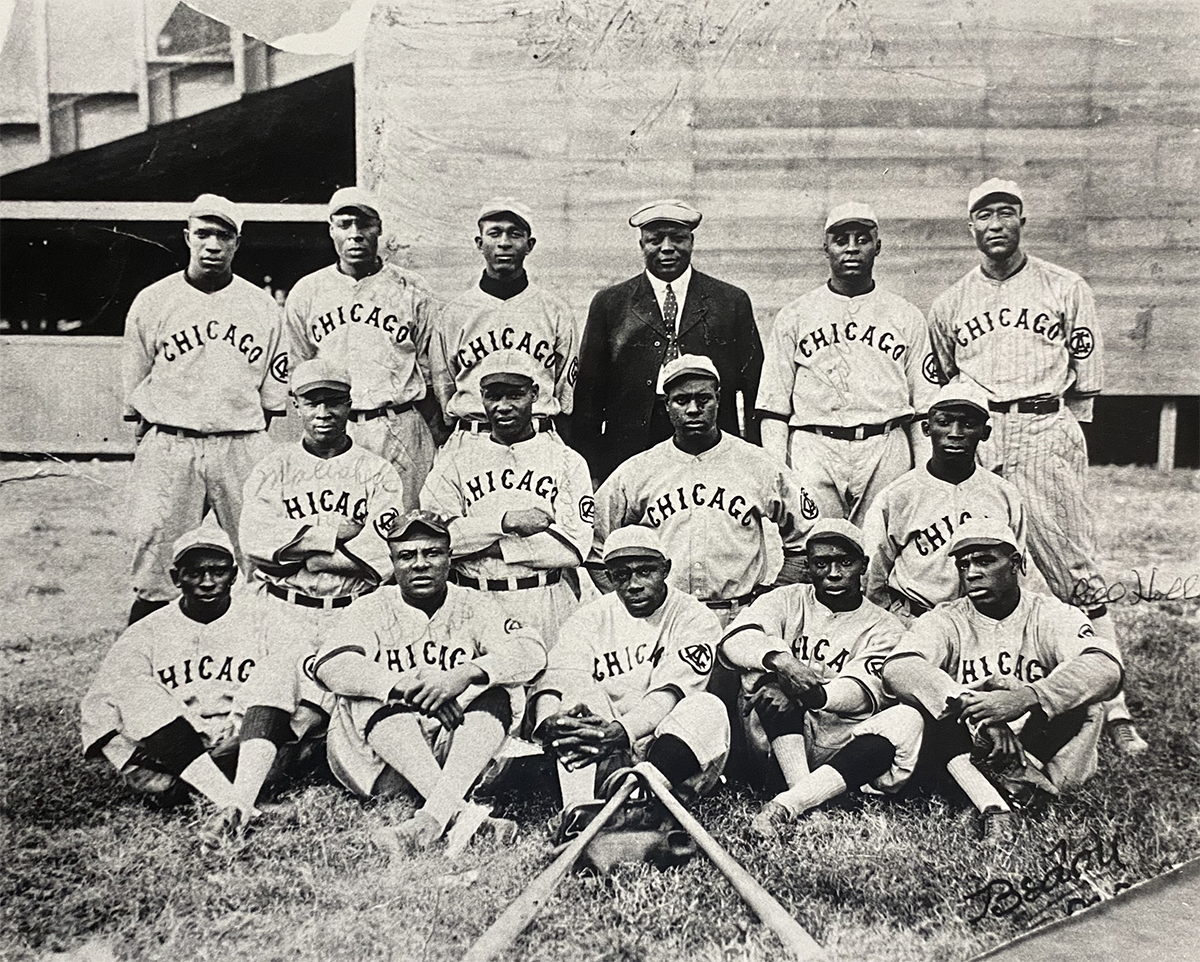 Augustus Eugene “Gene” Staley was the founder and president of the A.E. Staley Manufacturing Company of Decatur, Illinois. The enterprise made starch and other products from corn. Gene Staley loved baseball. In 1917 he built a ballpark on company grounds and named it Staley Field, and he sponsored a company team known as the Staley Starch Workers. Two years later he recruited “Iron Man” Joe McGinnity to manage the team.

McGinnity was a local hero. He grew up in Decatur in the 1880s, playing baseball on its sandlots. As a major-league pitcher from 1899 to 1908, he won 246 games. And in the minors from 1909 to 1918, the right-hander won 180 more games. Known as “Iron Man” for his endurance,1 McGinnity occasionally pitched both games of a doubleheader. He returned to Decatur in 1919 at the age of 48 to work in the Staley starch factory and pitch for and manage the Staley baseball team.

Gene Staley started a company football team in the fall of 1919. The following spring, he recruited George Halas, a 25-year-old Chicagoan who had played baseball and football at the University of Illinois. Halas agreed to work for Staley’s company, play on its baseball team, and play on and coach its football team. Staley authorized Halas to recruit football players and Halas assembled a powerhouse: The 1920 Decatur Staleys achieved a 10-1-2 record in the newly formed American Professional Football Association. Among his players were George Trafton, a center from Notre Dame, and Guy Chamberlin, an end from the University of Nebraska. “We were starch workers first and football players second,” said Trafton. “I received a salary for paddling starch.”2

McGinnity was the manager and Halas the captain of the 1921 Staley baseball team. The “Iron Man” was not the only Staley player with major-league experience. Ray Demmitt played in seven major-league seasons, most recently for the 1919 St. Louis Browns, and Halas, Ed Hemingway, and Walt Meinert played briefly in the majors. 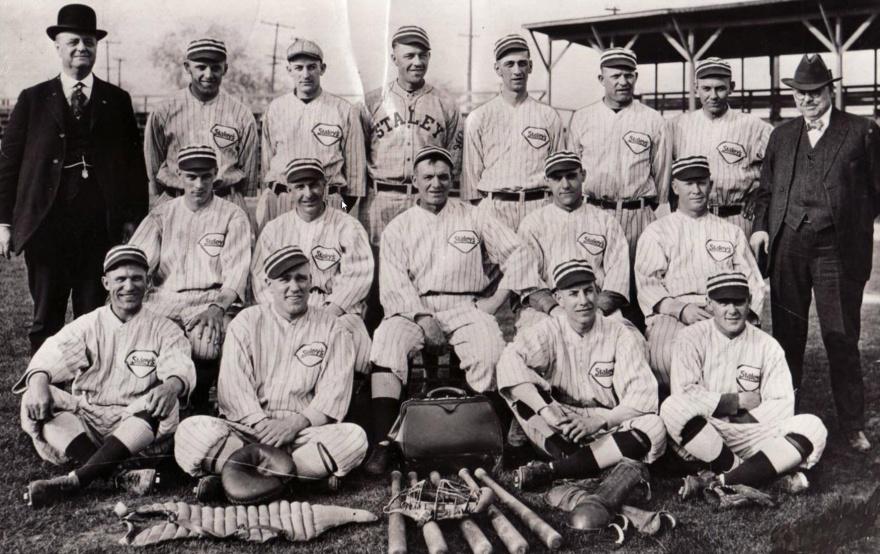 The 1921 Staley team belonged to the Central Industrial Base Ball Association, a league of Midwestern company teams. At age 50, McGinnity was an old-timer but not the only one in the league; 44-year-old Mordecai “Three Finger” Brown, a former Chicago Cubs ace, pitched for the Havoline Oil Workers of Lawrenceville, Illinois.3 The clubs in the Association could schedule games with teams outside the league with one notable exception: They were not permitted to play against a semipro outfit known as the Chicago Black Sox, which included former Chicago White Sox players who were indicted for “throwing” the 1919 World Series.4

The umpires for the series were Staley employees, Andy Lotshaw and George Trafton. The American Giants won the first game, 4-1; Halas’s home run to deep right field accounted for the lone Staley run. The Starch Workers prevailed in the second contest, 6-4. The third game, on Saturday, July 16, drew between 1,500 and 2,000 fans. It was a hot summer day in Decatur, with the temperature in the 90s. Southpaw Dave Brown pitched for the American Giants, and the venerable McGinnity took the mound for the Staleys.

The visitors batted first. Dave Malarcher led off the game with a single to left field. Bingo DeMoss singled to right field and Jimmie Lyons drew a walk. McGinnity now faced the dangerous Torriente with the bases loaded and nobody out. A left-handed batter, Torriente grounded the ball to Halas, the Staley second baseman, who flipped it to shortstop Ray “Buster” Woodworth for a force out at second base. Woodworth fired the ball to first baseman Otto “Lefty” Pahlman in time to complete a double play. Malarcher scored on the play.

The American Giants scored again in the second inning when Leroy Grant singled in Bobby Williams, who had walked and stolen second base. DeMoss led off the third inning with a single to left field. Lyons reached when Halas fumbled his grounder, and Torriente stepped to the plate with two on and no outs. There would be no double play this time — Torriente drove a McGinnity pitch to deep center field for a three-run homer.

In the fourth inning the American Giants scored twice more, on a fielder’s choice, a triple by DeMoss, and a single by Lyons. After four innings, the visitors led 7-0. McGinnity, who had given up eight hits and three walks, took himself out of the game. He brought Guy Chamberlin to the mound from right field; sent Halas to right field to replace Chamberlin; moved Woodworth to second base; and brought Charlie Schaefer into the game as the new shortstop. The American Giants tallied another run in the fifth inning, on an error by Schaefer and two singles.

Halas led off the bottom of the fifth with a single over second base; it was the Staleys’ first hit of the game. Demmitt was credited with a single on a dribbler to Malarcher, the third baseman, who threw wildly to first base. Halas reached third base on the play and came home on Chamberlin’s fly out to left field.

The American Giants added two more runs in the sixth inning. DeMoss singled to center field and advanced to third on Lyons’ single to right. Torriente also singled to right, scoring DeMoss and sending Lyons to third. As Torriente stole second base, Lyons stole home on the front end of a double steal. The onslaught continued in the eighth inning: The American Giants scored four more runs. Triples by Torriente and Grant, and a home run by Floyd “Jelly” Gardner did the damage.

The home team scored four runs in the bottom of the eighth, with singles by Chamberlin, Schaefer, Pahlman, and Halas. It was too little, too late. The final score was Chicago American Giants 14, Staley Starch Workers 5.

Dave Brown pitched a complete game and struck out 11. The American Giants collected 21 hits, setting a record for the most hits by a visiting team at Staley Field. DeMoss had four hits, Torriente had three, and the seven other American Giants had two hits apiece.

The 1921 Staley team enjoyed a fine season, compiling a 52-31 record. Ray Demmitt led the team with a .383 batting average.5 But budget cuts at the company put an end to the Staley baseball program. For the next five years, Joe McGinnity worked in the Staley factory in the offseason while continuing his baseball career elsewhere. He pitched for and managed teams in Danville and Springfield, Illinois, and Dubuque, Iowa, until 1925, and in 1926 he served as a coach of the Brooklyn Robins of the National League. The Iron Man died of bladder cancer in 1929.

With Gene Staley’s permission and encouragement, George Halas and the Staley football team played home games at Chicago’s Wrigley Field in the fall of 1921. The following year, the team became the Chicago Bears, and the American Professional Football Association became the National Football League. Andy Lotshaw was the trainer for the Bears and Chicago Cubs for 30 years, until 1952. “Papa Bear” Halas remained owner of the Bears until his death in 1983 at the age of 88. In 2003 the Bears introduced a mascot, a bear named Staley.

The A.E. Staley Manufacturing Company began processing soybeans in 1922 and encouraged farmers to grow the protein-rich crop. It was a significant moment in US agricultural history. Decatur would become known as “The Soybean Capital of the World.”

Gene Staley died of a heart attack in 1940 at the age of 73. He was succeeded by his son, A.E. Staley Jr., as chief executive officer. The Staley firm was acquired in 1988 by Tate & Lyle, “a global provider of solutions and ingredients for food, beverage and industrial markets.”6

George Halas, George Trafton, and Guy Chamberlin were inducted into the Pro Football Hall of Fame in the 1960s. Joe McGinnity, Rube Foster, and Cristóbal Torriente entered the National Baseball Hall of Fame posthumously, in 1946, 1981, and 2006, respectively.

Game coverage in the July 17, 1921, issues of the Decatur Herald and Decatur Review, and in the August 1921 issue of the Staley Journal, a magazine for employees of the A.E. Staley Manufacturing Company.

Forrestal, Dan J. The Kernel and the Bean: The 75-year Story of the Staley Company (New York: Simon and Schuster, 1982).

Photos courtesy of the author.

1 According to Don Doxsie, McGinnity was first given the nickname “Iron Man” for his offseason work at an iron foundry.