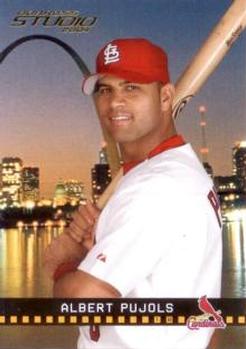 In mid-July 2004, more than 600 members of SABR descended upon Cincinnati for their 34th annual convention. One of the highlights of the weekend was a Friday-night ballgame between the Cincinnati Reds (47-42) and their NL Central Division rival St. Louis Cardinals (55-33). The Cardinals had captured the division lead in mid-June and never relinquished the top spot on their way to a World Series appearance.

More than 39,000 fans filed into Great American Ball Park, in its second season, on the evening of July 16, 2004. It was a perfect evening for baseball. The temperature was in the low 80s at game time and the oppressive humidity that often hangs over the Ohio River valley was missing.

Cincinnati manager Dave Miley sent righty Paul Wilson (9-2 with a 3.66 ERA) to the hill. Wilson was coming off consecutive wins over Cleveland and Milwaukee and was in the midst of his finest major-league season. Cardinals skipper Tony La Russa countered with 37-year-old Woody Williams, who came into the game at 6-6 with a 4.09 ERA.

The Cardinals were a veteran squad, but on this night they were using 21-year-old Yadier Molina behind the plate. Their next older player was first baseman Albert Pujols, who was already in his fourth season at the age of 24. Tony Womack led off for St. Louis and flied out to open the game. Two singles followed but Wilson worked out of the jam.

Williams toed the rubber in the bottom of the first and retired Ryan Freel on a grounder. The versatile Freel was playing center field in place of future HOFer Ken Griffey Jr. Griffey had injured his hamstring the previous weekend and was on the disabled list. The injury cost him an All-Star Game appearance; he was replaced by Carlos Beltran.

Like Wilson before him, Williams then surrendered two singles. Unlike Wilson, Williams followed with a walk to Adam Dunn to load the bases. D’Angelo Jimenez smacked a grounder that led to a force out at second, Barry Larkin scoring from third. Wily Mo Pena then hammered a 1-and-1 fastball into the seats in the left-field alley, giving the home team a 4-0 lead.

Wilson settled down and hurled 1-2-3 innings in the second and third. Williams continued to struggle in those frames, allowing three hits, but no runs. In the top of the fourth, Pujols led off with a single and came around on a double by Jim Edmonds. Edmonds was especially tough for Reds pitchers. He batted .338 against them in 2004 and launched eight home runs.

The Cardinals added another run in the fifth to pull within two as Pujols laced a two-out single to plate Womack. Meanwhile it appeared that Williams had found his rhythm as he retired seven in a row. That streak ended in the sixth when catcher Jason LaRue blasted his ninth home run of the season to put the Reds up 5-2.

The managers turned the game over to their bullpens. St. Louis sent in Kiko Calero in the seventh. Wilson closed out that inning for the Reds and was replaced by Todd Jones in the eighth. Manager Miley praised Wilson but noted, “He was gassed. You can’t ask for more than he gave us.”1 Wilson had thrown 99 pitches, 69 of them for strikes, and seemed poised for his 10th win.

The 36-year-old Jones was the Reds’ set-up man and was enjoying a fine season. He was 7-2 and had recorded 20 holds with a 3.33 ERA. This evening proved to be one of his least effective outings. He struck out Edgar Renteria to open the frame but surrendered a single to Pujols and walked Scott Rolen on a full count. He humbled Reds nemesis Edmonds with a third-strike heater but walked John Mabry to load the bases.

Reds closer Danny Graves had been warming in the pen and Miley signaled for him to enter the action. It was the fifth time during the season that Miley had called on Graves to enter the game in the eighth. Only the May 19 game ended with a Reds victory.

Graves already had 33 saves for the season; he also had seven blown saves and absorbed three losses. This was only his second appearance against the Cardinals in the season. His earlier one resulted in a blown save and Reds loss. The right-handed Graves, known as the “Baby-Faced Assassin,” faced former teammate Reggie Sanders.

The right-handed-hitting Sanders drilled a grounder into left field to plate two runs and make the score 5-4. La Russa then sent Marlon Anderson to pinch-hit for Molina. The 30-year-old infielder was a left-handed hitter and La Russa was playing the percentages.

Graves was a sinkerballer with a curve and a change to mix in. He was low with his first offering and then got Anderson to ground foul on a sinker. Graves’s third offering was a curveball that Anderson sent deep into the night in right-center. The Cardinals had completed their comeback and now led 7-5. Graves surrendered a single before closing out the inning.

Cardinal relievers Steve Kline and Julian Tavarez struck out the side in the Reds’ half of the eighth. Graves retired the Cardinals in order in the ninth. St. Louis turned to its closer in the ninth. Righty Jason Isringhausen was enjoying his finest season. Coming into the game he had 21 saves and a 2.76 ERA. He would close out the season with a league-leading 47 saves (tied with Armando Benitez).

The first batter to face Isringhausen was Jason LaRue, who turned on a first-pitch fastball and sent it hurtling toward the batter’s eye in center field. Cardinals center fielder Edmonds shifted into high gear and raced to the wall. With his back to the infield, he leapt into the air and pulled down LaRue’s blast an arm’s-length past the barrier just as it sought to nestle onto the grassy knoll in center field.

Not only was Edmonds a Reds killer at the plate, but he had a history of highlight-reel catches against them. LaRue told reporters, “He’s done it to me three times now. Oh well, what can you do. Enjoy the highlight.”2 Edmonds had made a similar catch off the bat of Dunn just 10 days earlier.3

Left-hander Jacob Cruz was sent up as a pinch-hitter next. He worked the count to 3-and-0 before grounding to Pujols. Newly acquired lefty pinch-hitter JohnVander Wal grounded to third to end the game. The Reds players knew they had let one slip from their grasp and felt the wrath of their fans, who booed the final result.

The Cardinals would eventually lose the 2004 World Series in four games to the Boston Red Sox. The Reds’ season spiraled downward. They won only 29 more games to finish 76-86 and in fourth place in their division.

In addition to the sources cited in the Notes, the statistics and chronology of events are courtesy of Baseball-Reference.com.

A large contingent of SABR members took over a section of the Sun/Moon Deck in right field. Another group opted for seats in the “view level” of the upper deck. The large crowd of Cincy rooters were enjoying the Reds lead in the middle innings. Their enthusiasm led to the audience-participation phenomenon known as “The Wave.” It swept around from deep down the first-base line, past home plate, down the third-base lane, across left field, and into the Moon Deck, where it came to the section of SABR fans who were so intent upon the game and their discussions of the chances of a Cardinals comeback that no one budged. The wave had gained enough momentum, however, that it continued around again only to be met by an unmoving gathering of baseball purists in right field. Fans in adjoining sections were quite creative with their “praise” of the SABR contingent. Suggestions for what we could do later that night and weekend were numerous.