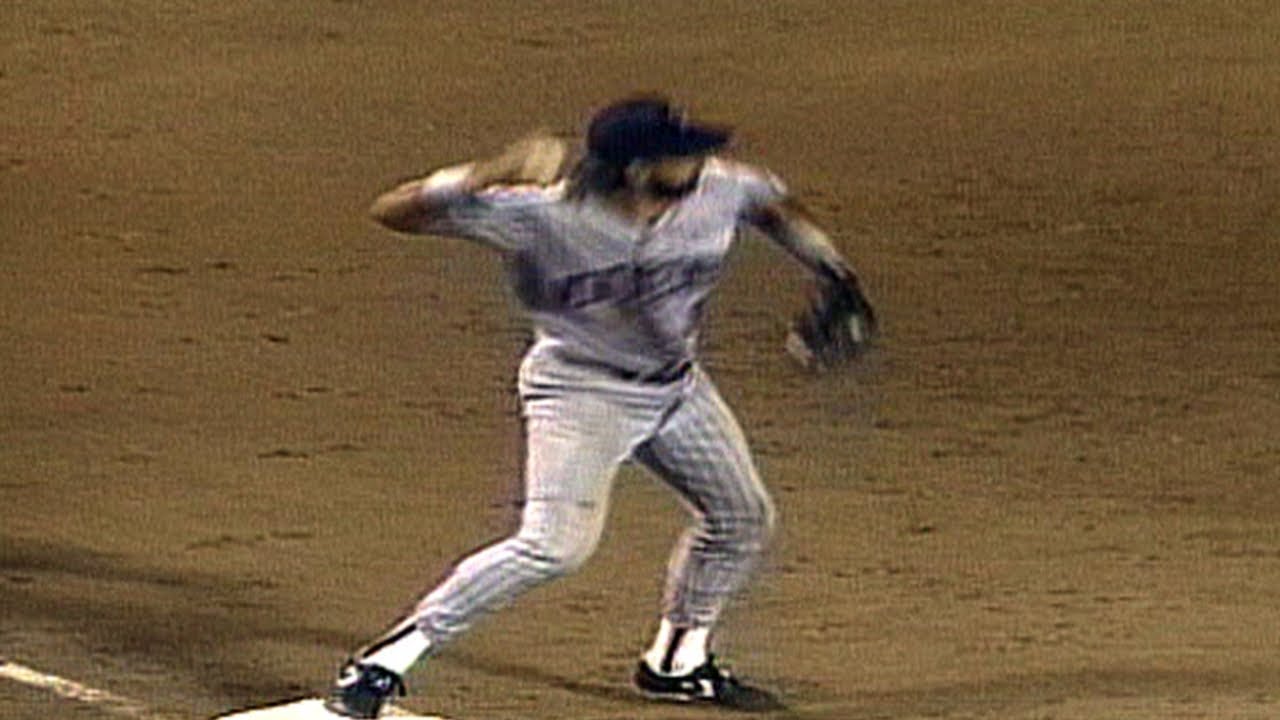 In a game played before a Fenway Park crowd of 34,113, the Minnesota Twins turned two triple plays against the Boston Red Sox, a feat that had never happened before in the major leagues. Despite the rare accomplishment, the Twins lost to the Red Sox, 1-0. Left-hander Tom Bolton, a veteran of the Red Sox farm system, started the game for Boston (his first start of the season), facing 22-year-old rookie Scott Erickson for Minnesota.

The Twins were in fifth place in the American League West. The Red Sox had lost eight of their previous nine games, and started this game on the wrong foot as well. The Twins’ Shane Mack led off with a groundball to shortstop Tim Naehring, who booted it for an error. Al Newman sacrificed Mack to second base. After Kirby Puckett struck out, Bolton walked Gary Gaetti and Kent Hrbek, loading the bases. Dan Gladden struck out swinging to end the inning, and that was the best chance the Twins would get all night.

The first defensive gem came in the bottom of the fourth inning. Erickson was facing the top of the Red Sox order, after retiring the first nine batters in order. Wade Boggs walked and Jody Reed doubled to deep right-center field. Boggs stopped at third base. Carlos Quintana walked, and suddenly the bases were loaded with nobody out. Tom Brunansky hit a hard groundball down the line at third base. Gaetti gloved it, stepped on third, and fired to second baseman Newman, who pivoted and fired to Hrbek at first, completing the triple play.

“Wade was on third,” said Gaetti after the game, “and I said to him, ‘Wade, a 5-4-3 triple play is coming up right here.’ Go ahead … ask the umpires … ask Wade. Wade even tipped his hat to me when he came out the next inning.”1 Boggs acknowledged the prediction. “I guess that puts Gaetti right up there with Nostradamus, the Amazing Kreskin, and Karnak the Magnificent,” Boggs said later. Twins second baseman Newman corroborated the story. “Gary looked at me right before the play and said, ‘We’re getting three.’ But he always says that. What was weird is I told Jody Reed that we were going to get a triple play. He said, ‘The way things are going for us, you’re probably right.’ When we walked off the field, we just looked at each other. It was spooky-like.”2

In the fifth inning with one out, Boston’s Mike Greenwell reached on an error by shortstop Greg Gagne. Tony Pena singled to right field. Billy Jo Robidoux grounded a ball to Gagne, who threw to Newman, forcing Pena out at second. Naehring then hit a short line drive single to center, driving in Greenwell. Robidoux tried to make it to third base but was thrown out by Minnesota center fielder Kirby Puckett to end the inning. Naehring told reporters after the game, “I just made up my mind I was going to go the other way with it.”3

The Twins tried to mount a rally in the top of the sixth. With one out, Hrbek singled to center field and Gladden reached on an error by Reed. But Bolton struck out Carmelo Castillo and Junior Ortiz to end the threat. In the top of the seventh, Gagne led off with a single. Mack flied out to deep right and Newman hit into a 5-4-3 double play.

In the eighth inning, defensive lightning struck again. Naehring led off with a double to left-center field. Boggs drew a walk. With the runners going, Reed hit a sharp grounder to Gaetti at third, who again stepped on third base and threw to second. Newman made the catch and force out and threw to first, completing the triple play and getting Reed by several steps.

“It’s kind of like landing on the moon, huh?” said Reed, the Red Sox second baseman. “We’re the first.”4 Red Sox manager Joe Morgan added an interesting point: “I put the hit-and run on so we wouldn’t hit into a double play. So we hit into a triple play.”5

Erickson allowed only four hits in six innings, walked three and struck out four. Even though he took the loss, his ERA dropped, from 4.70 to 3.72.6 Bolton was better, though, allowing five hits in eight innings, striking out six and walking four. He picked up his third win of the season against no losses, and Jeff Reardon earned his 16th save. The Boston Globe reported the importance of Bolton’s win: “Bolton gave the Sox their first win by a starter since July 2, their first win by a left-handed starter since June 18 of last year (Joe Price) and just the second in the post-Bruce Hurst era.”7 Bolton told reporters, “I threw a lot of groundballs. I got a big double play in the seventh that really helped.”8

Rookie Boston shortstop Naehring was the offensive hero of the contest, going 2-for-3, including the pivotal RBI single. That made up for his defensive miscue in the first inning. The Twins left nine runners on base. With the two triple plays, the Sox only had 4 runners left.

Fans can watch the two triple plays and hear This Week in Baseball’s Mel Allen give his introduction, as well as hear the play-by-play of the two calls (click here).9 Jeff Lenihan of the Star Tribune wrote that “in their losing effort, the Twins nominated the Gaetti-to-Newman-Hrbek triumvirate to a place alongside Tinker-to-Evers-to-Chance in baseball lore.”10 No one remembered to collect either of the baseballs as artifacts. However, the Baseball Hall of Fame asked Gaetti to donate his glove. He told reporters, “Maybe. … I need that glove. I really do.”11

The very next night (July 18, 1990) saw the Twins and Red Sox play another defensive record-breaking game. Boston hit into an American League-record six double plays. The Twins hit into four, combining for a major-league record 10 double plays in the game, which the Red Sox won, 5-4. Dr. Dave Abrahamson, a professor at Rhode Island College at the time, calculated the odds of turning two triple plays in the same game to be approximately 370,000 to 1, meaning that fans should see it happen “once every 175 years.”12