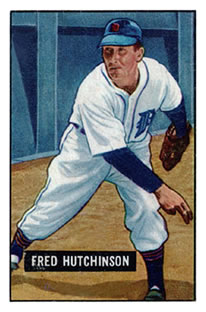 Michigan and Trumbull was one of the more popular destinations in the major leagues in the mid-1940s. The Tigers led all of baseball in attendance in 1944. In 1945 they did even better as they attracted over 30 percent more home rooters than the next team while drawing a Detroit record 1,280,341 spectators. The 1946 season saw the Tigers ranking behind only the New York Yankees in home attendance.

And why not? Detroit had fielded the world champions in 1945 and second-place teams in 1944 and 1946 behind stars like Hank Greenberg, Hal Newhouser, and Dizzy Trout. The Tigers were one of the premier teams in the American League, having fielded a winning team in 11 of the last 13 seasons (1934-1946), and won four pennants and two world championships in that span. Arguably, they were the most successful team in the American League outside of New York.

The Yankees had recently not experienced much in the way of success, however. After winning pennants from 1941 through 1943, they had gone three years without winning the AL race, almost an eternity for the New Yorkers. In 1946 they had finished 17 games behind pennant-winning Boston, their furthest off the flag since 1929.

In 1947, though, the Yankees were playing like a team on a mission, and were threatening to make a mockery of the junior-circuit race. After getting off to a sluggish start, the Yankees hosted Boston on May 23-26 and swept the defending champs while outscoring them 40-5 over the four games. In fact, since May 23, Bucky Harris’s squad was 45-12, playing .789 ball, and riding a 19-game winning streak. Pundits were calling this squad a team for the ages. Opposing players and managers grudgingly admitted that the Yanks were clearly the class of the league.

A victory this afternoon, July 18, 1947, would give the Yankees 20 wins in a row and with it the American League record for the longest winning streak, which they currently shared with the Hitless Wonders, the 1906 Chicago White Sox. The major-league standard was 26, held by John McGraw’s 1916 New York Giants.

The Yankees were entrusting right-handed pitcher Randy Gumpert with the streak. Gumpert was undefeated (3-0) with a 4.08 ERA as a part-time starter thus farin the season. He had his first sustained opportunity in 1946 and took advantage of it, going 11-3 with a 2.31 ERA.

Taking the mound for Detroit was right-hander Fred Hutchinson, a pitcher whose main weapons on the mound were his control, his change of pace, and his heart. Hutch came onto the big-league scene pretty quickly, having made his major-league debut against the Yankees as a 19-year-old. That contest, on May 2, 1939, was memorable: It was the game in which Lou Gehrig had voluntarily ended his 2,130-game playing streak. Hutch was a bit player in the drama of that day, pitching only two-thirds of an inning, but allowing eight runs.

This was his first start since June 19; because of a sore shoulder, he had been limited to occasional relief outings. The visiting Yankees were likely not Hutch’s first choice of an opponent in his return to the rotation; he came into the game with a 6.68 ERA in 31 career innings against them.

The contest was scheduled to start at 5:30 P.M. As night baseball was gaining in popularity — about a quarter of American League games were played at night — Detroit was the last AL holdout, not yet having installed lights in Briggs Stadium. In 1943 the Tigers started holding “twilight games.” In 1947 seven of them were scheduled from June through August. These games were quite popular with fans, as they allowed workers the opportunity to catch a game after their employment was done for the day. The first such game in 1947, played June 10 against the Philadelphia Athletics, drew 36,143 fans, and the Tigers management was hoping to top 200,000 twilight spectators for 1947. This day’s crowd was listed at 28,718 — significantly higher than the usual Detroit crowd.

After going down in order in the first inning, the Yanks found themselves in a hole early, as Detroit put two runson the scoreboard in the bottom of the frame.

Joe DiMaggio, who was hitting .375 with 17 home runs over the past 19 games, led off the second inning with a single. Unfazed, Hutchinson retired George McQuinn and got Billy Johnson to ground into a double play to end the inning. The Yankee Clipper was the only baserunner Hutchinson allowed until Snuffy Stirnweiss’s bunt single in the seventh inning.

During the streak, the New Yorkers had come from behind to pullout victories six times. Could this be the beginning of another such rally? It would be a daunting task, as the Tigers were up 3-0 and Hutchinson had looked almost untouchable. But Stirnweiss was stranded at first, and the Tigers then scored four runs in the bottom of the seventh, chasing Gumpert. They tacked on another run in the eighth off Yankee right-hander Karl Drewsto increase the lead to 8-0.

In tallying their runs, the Tigers had ripped out 18 hits — 16 of which were singles! The only extra-base hits were two doubles by Hutchinson, a .316 career hitter entering the 1947 season. The Tigers left 10 runners on base, indicating that the score could have been worse for New York.

In the top of the ninth, Hutchinson set New York down in order, ending the Yankees’ winning streak in a mere hour and 43 minutes. He allowed only five balls out of the infield, and Yankees coach John Corriden called Hutchinson’s masterpiece “the best game anybody has thrown at us all season.”1 Batterymate Bob Swift was impressed as well, saying that Hutchinson was “almost perfect.”2

With the end of the streak, the Yanks were 58-27, the Tigers 45-35 — 10½ games back. Hutchinson certainly looked to be back in form. During the Yankees’ 19-game streak, Detroit had gone 14-5, an indicator that they too were capable of reeling off a victory streak. With more than 70 games remaining, could the Tigers make a run at the AL flag?3

3 The Tigers were not able to mount a run, and on August 21 even fell into fourth place, 15 games behind. The Yankees’ lead was never less than 9½ games the rest of the season and they ended up 97-57, 12 games ahead of the second-place Tigers. The Yanks went on to defeat Brooklyn in seven games in the World Series.