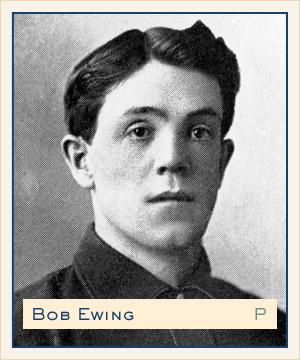 The Philadelphia Phillies were in first place by 1½ games when the second-place Chicago Cubs came to town on July 20, 1911. But the Phils were without their most potent hitter, Sherry Magee, suspended for the balance of the season1 by National League President Thomas J. Lynch after flattening umpire Bill Finneran in a disagreement over a called third strike.

Each day seemed to bring new difficulties for the Philles. On this afternoon, player-manager Red Dooin’s immediate headache was a case of chills and fever that had felled his scheduled starting pitcher, Sleepy Bill Burns. Casting around for a last-minute replacement, Dooin watched as Bob Ewing threw batting practice.

The veteran spitballer, bedeviled by arm trouble, had spent most of the summer pitching batting practice and coaching the bases. He had appeared in only two games and pitched just 11 innings. Maybe Dooin was desperate. Or maybe the old man truly had something on the ball. For whatever reason, Dooin told Ewing to go into the clubhouse and get a rubdown, then come back out and warm up. As game time approached, Ewing and fellow pitcher Eddie Stack limbered up their arms side by side as the manager looked on. Then, Dooin handed the ball to Ewing.

What followed, according to sportswriter William G. Weart, was “quite a ballgame.”2 From a Chicago perspective, I.E. Sanborn called it “the most bitterly fought combat of the present trip … a stiff uphill game the Cubs had to play against the most determined and brilliant kind of defense.”3

Matched against his frequent nemesis Ed Reulbach, Ewing poured all he had into one gallant last stand. Summoning up everything that was left in his 38-year-old arm and everything he had stored over the years in his 38-year-old head, he scratched and scuffled for every out. Working carefully to the Cubs’ dangerous sluggers, Long Bob got through the lineup the first time without allowing a baserunner. He pulled his old “quick return” trick on Heinie Zimmerman, slipping over a second strike while the hitter argued about the first one; when Ewing tried to do it again, Zimmerman barely got the bat on the ball and slapped a docile grounder to third base.

Though “the visitors batted Ewing’s curves viciously at times,”4 he held them in check – with one exception. After the Phillies took a 2-0 lead in the bottom of the first inning, Frank “Wildfire” Schulte got Chicago on the board with a run-scoring double in the fourth inning. In the sixth he tripled to drive in another run, then came home on Solly Hofman’s single to tie the score at 3-3.

The game was still deadlocked when the Cubs came to bat in the eighth, but Ewing was wearing down. Shortstop Mickey Doolan made a one-handed stab on Reulbach’s hot smash and fired to first for one out, while Ewing legged it over to cover the bag and nip Jimmy Sheckard on a grounder to the right side for the second out. That brought Schulte up again, and when Ewing grooved a pitch over the heart of the plate, he pulled it high and deep. Right fielder Fred Beck could only watch as the ball cleared the fence by 10 feet.

Schulte’s home run – the 10th of his league-leading 21 in 1911 – gave the Cubs all they needed for a 4-3 victory. Still, when it was over, some optimists dared to hope that Dooin had found himself a much-needed additional pitcher. Chandler Richter of the Philadelphia Evening Times wrote hopefully of Ewing’s “return to form,” terming it “pleasant news to the Philly team.”

“It was apparent that Old Bob had everything,” Richter told his readers. Aside from Schulte, he added, “None of the other heavy-hitting Cubs could do anything with Ewing’s shoots.”5

The realists in the press box saw an entirely different game. To them it was clear that for most of the afternoon, various Phillies had kept Ewing in the game by running all over the lot making circus catches. Doolan and center fielder Dode Paskert came in for fulsome praise, and catcher Dooin got in on the act when he scuttled down to third base and tagged out Joe Tinker trying for an extra base after a throw from the outfield was mishandled. Left fielder Jimmy “Runt” Walsh6 made the biggest grab of the day, racing toward the foul line and picking a drive out of the air before crashing into the concrete barrier in front of the bleachers, robbing Jimmy Doyle of a potential home run.

There would be no comeback for Ewing and no pennant for Philadelphia. Two days later, the Phillies were out of first place, Before the week was through, Dooin broke his leg in a home-plate collision and was lost for the season along with his .328 batting average. Even after league president Lynch relented and lifted Magee’s suspension after five weeks, the club never got back to the top of the standings.

Ewing pitched only once more for Philadelphia – a humiliating mop-up assignment in a 13-0 trouncing at Pittsburgh on August 8. He languished for another month before, on September 12, the Philadelphia papers reported that he had been given the required 10 days’ notice of his unconditional release. He never won another game in the major leagues and was out of baseball at age 39 after a 5-4 season at Buffalo of the International League in 1912.

In addition to the sources cited in the Notes, this account includes information acquired from the Baseball-Reference.com and Retrosheet.com websites.