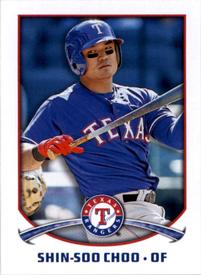 A week after the 2015 midsummer classic, Texas Rangers outfielder Shin-Soo Choo exploded for a single, double, triple, and home run against the Colorado Rockies. In doing so, he became the first Korean to hit for the cycle in the major leagues.

The Rangers (43-49) were sitting in third place in the American League’s West Division, having lost 18 of their last 24 games. They were visiting the NL West last-place Rockies (40-51) at Coors Field, yet a crowd of 43,012 came through the turnstiles for the evening interleague game.

Southpaw Matt Harrison was given the nod to start for Texas. This was his second appearance of 2015, as he had made his season debut only two weeks earlier, in a July 8 contest against the Arizona Diamondbacks.1 Opposite him was right-hander Kyle Kendrick, who had not started a game since July 9.

The action started in the second inning. Elvis Andrus led off with a grounder through the middle for a single. Choo jumped on Kendrick’s first pitch, driving a double into the right-center gap, and Andrus raced home easily for the game’s first tally. Robinson Chirinos worked a full count and then drew a walk. As this was an interleague game played in a National League city, Harrison had to bat. In his first plate appearance since 2012, Harrison successfully laid down a sacrifice bunt, moving both runners up a base. Delino DeShields then stroked a single into left for two runs batted in. With Rougned Odor batting, DeShields attempted a steal of second base. He was called safe, but Rockies manager Walt Weiss challenged the ruling, and after review, the call was overturned. However, the Rangers still led, 3-0.

Two innings later, Choo led off and blasted his 12th home run of the season beyond the wall in right for Rangers run number four. Harrison, for his part, was keeping the Rockies off of the scoreboard. Through the first four innings, Harrison had allowed four hits and a walk, but Colorado could not get a runner across home plate.

In the fifth, Texas struck again. Kendrick retired Adrian Beltre on a groundout to short, but Josh Hamilton and Andrus both singled, prompting Weiss to make the call to the bullpen. Yohan Flande entered the game, and the first batter he faced was Choo. The first pitch he threw to Choo was grounded through the right side for an RBI single, his third hit of the game. After Chirinos struck out, Harrison squibbed a grounder in front of home plate. Flande fielded the ball but made a wild throw to first, allowing Andrus to score and sending Choo to third. DeShields then struck out, but Texas had increased its lead to 6-0.

Prince Fielder socked a solo home run to deep center in the sixth, and two innings later, DeShields led off with a triple off of reliever Rex Brothers and scored when the next batter, Odor, lined the ball into left for a sacrifice fly.

Coming to bat in the ninth, Choo led off again. This time, he “crushed a high drive to deep center”2 that hit off the base of the wall and bounded away from center fielder Charlie Blackmon. Choo raced around second and slid into third base, becoming just the ninth Ranger to hit for the cycle. After the game, he said, “I wasn’t thinking about it, because [Brothers] is not an easy pitcher. A left-handed pitcher with pretty good stuff. I just tried to hit the ball hard, but I thought [Blackmon] might catch it.”3 Instead, Blackmon tried to play the carom but missed, and the ball rolled back away from the wall. Chirinos followed with a single into the hole at short, allowing Choo to come home with the Rangers’ ninth run.

Meanwhile, another cycle possibility was developing. DeShields came to the plate after Choo with one out. He had already hit two singles, a double, and a triple in the game. He got ahead of reliever Rafael Betancourt by a 2-and-0 count, but instead of hitting a home run to get his own cycle, he struck out. “I should have swung at the next pitch and see what happens,” DeShields said.4 “It was a good pitch, and I took it. After that, I was kicking myself.” The four hits for DeShields were a career high. Had he hit the elusive home run, this would have been the first major-league game in which two players hit for the cycle.

Harrison picked up the victory, his first in 14 months.5 He pitched six solid innings, and his defense picked him up with a double play in the fourth and Choo’s diving grab of a Troy Tulowitzki liner in the fifth.

Choo had spent much of the season batting near the top of the order, but after the All-Star break, skipper Jeff Banister placed him in the eighth and seventh spots for a few weeks before returning him to the second position. His 4-for-5 performance at the plate, plus three runs scored and a stolen base, made this a career game for Choo. He told reporters, “I’m excited. I had four days off at the All-Star break, and that was a mental break. I’m feeling better. My confidence was coming back.”6

Choo had driven in three runs as well. His double in the second plated Andrus. He hit the solo homer in the fourth, scoring the run himself. His single in the fifth drove in Hamilton. Rangers manager Jeff Banister was just as excited as his right fielder, saying, “To see him end the night the way he has, his teammates cheering him on and yelling for him to go to third, it was great to see.”7

Seven of the eight starting position players collected hits in this slug fest. Only Beltre was held hitless. The last Texas player before Choo to hit for the cycle was Alex Rios, who did so on September 23, 2013. Two weeks after Choo’s accomplishment, on August 3, Beltre made history by becoming just the fourth player to hit for the cycle three different times.8 Two years after that, on April 29, 2017, Carlos Gomez hit for the cycle, the 11th time that a Rangers player had accomplished this feat.9

1 In 2012, Harrison pitched 213⅓ innings and made 32 starts for Texas, but in 2013, he appeared in only two games (in late March and early April). The next season, he pitched in only four games (in April/May), so he had been away from the majors for over a year. He made one more start, on July 27, 2015, in a contest against the New York Yankees. He allowed six earned runs in six innings pitched and on July 31, he was traded to the Philadelphia Phillies, but he never again pitched in the major leagues.

5 Injuries had limited Harrison to making only six starts in the two previous seasons.

8 The others are John Reilly, Bob Meusel, and Babe Herman. Both Reilly (Cincinnati Reds) and Meusel (New York Yankees) accomplished all three of their cycles for the same team. Beltre achieved his last two cycles while playing for the Texas Rangers and accomplished his first while playing against the Rangers.

9 This was the second career cycle for Gomez. On May 7, 2008, as a member of the Minnesota Twins, Gomez cycled against the Chicago White Sox.