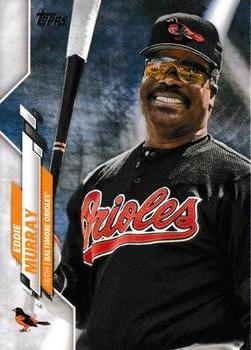 In the summer of 1996, the Baltimore Orioles were looking to make the trade that could take them into the postseason. A long 13 seasons had elapsed since the Orioles had played past the last day of the regular season, when they won the 1983 World Series against the Philadelphia Phillies under manager Joe Altobelli. Now, another skipper in his first season with Baltimore, Davey Johnson, was at the helm.1

Baltimore had made only one transaction as the trade deadline approached. They dealt left-handed pitcher Kent Mercker2 to the Cleveland Indians in exchange for veteran slugger and switch-hitter Eddie Murray. Murray, the 1977 American League Rookie of the Year, had played his first 12 seasons with Baltimore, and he had helped win that 1983 World Series. He was traded to the Los Angeles Dodgers in 1988 and then also had stints with the New York Mets and Cleveland Indians. He had recently played in the 1995 World Series for the Indians, and he was being counted on to provide leadership experience to a young Baltimore squad. Murray told reporters, “If I say something and I can help somebody, I hope they would take it well, as in a way I mean it, because I’ve played a few games and I’m here to help.”3

During his earlier Baltimore years, Murray had displayed both power and productivity, batting .295 with 333 home runs and 1,190 runs batted in. He made the American League All-Star team seven times and was in the top six of the AL’s Most Valuable Player Award voting for six consecutive seasons,4 including runner-up twice, and he had won three Gold Glove Awards. Further, prior to this homecoming, Murray played in two postseasons with the Orioles (1979 and 1983) and one with the Indians (1995). In each of those seasons, he played an integral part in his team’s making it to the World Series. Now, Johnson was hoping that the 40-year-old Murray still had some of that Baltimore magic left.

The Orioles opened a three-game series at home on July 22 against the Minnesota Twins. Murray had spent the three previous games wearing an Indians uniform, while “victimizing the Twins,”5 by hitting a game-winning home run in one game and driving in a bottom-of-the-ninth tying run in another. Then he was traded to Baltimore and was ready to face the Twins again in this, his first game back with the Orioles.

Holding down second place in the American League’s East Division, the Orioles were still eight games behind the front-running New York Yankees. The Orioles knew they might not catch the Yankees, but they also knew they just needed to win enough games to become the wild-card team. It would be a difficult task. According to Baltimore Sun writer John Eisenberg, the “lifeless Orioles are 11-26 against teams with winning records and seven games under .500 since mid-April.”6 A crowd of 42,129 turned out for the night game. Scattered chants of “Ed-die! Ed-die!”7 could be heard throughout the ballpark. When the lineup was announced, fans gave Murray a standing ovation.

Jimmy Haynes started for Baltimore; he was opposed by Minnesota’s Rich Robertson. Each hurler was in search of his fourth win of the season. Haynes was basically a rookie (he had been called up to the big club the previous September and had made four appearances), but he was struggling with his control, and he had been relegated to the bullpen in early June. In his first start since June 6, Haynes walked the first two batters he faced, Chuck Knoblauch and Rich Becker. After Paul Molitor forced Knoblauch at third base, Marty Cordova singled up the middle, plating Becker. Scott Stahoviak doubled to center, and Molitor scored, with Cordova stopping at third. Roberto Kelly flied out to center fielder Mike Devereaux, but it was deep enough to score Cordova. The Twins had grabbed a three-run lead.

Baltimore got one run back in the bottom of the first on singles by Mark Smith, Cal Ripken, and Rafael Palmeiro. Murray was in the on-deck circle when Bobby Bonilla grounded into an inning-ending double play. During the pregame news conference, a happy Murray had said, “You hope it’s an applause out there. Today is a new day. I honestly think a lot of people are excited about my coming back here, and I’m very excited about coming back here and getting some at-bats.”8

So, in the bottom of the second, public-address announcer Rex Barney started to announce Murray’s name when he strode to the plate to lead off the inning, but the crowd noise was too loud. The big Diamond Vision screen was playing a montage of his highlights from his first tour with the Birds. In his inaugural trip to the plate wearing an Orioles uniform again, Murray grounded a ball to Twins third baseman Dave Hollins, who threw the ball away and Murray reached base on the error. The fans cheered again, but his teammates left Murray stranded.

Each team added a tally in the third. Becker tripled for Minnesota and scored on Molitor’s sacrifice fly. Smith and Ripken again singled in the home half, and Bonilla drove a line-drive double into left-center for an RBI. Murray followed Bonilla by striking out.

Baltimore cut the lead to one run when Chris Hoiles led off the fourth inning with a home run, well beyond the left-field fence.

Haynes’s control abandoned him again in the top of the fifth inning. It was almost a repeat of the first frame. Knoblauch and Becker both walked and Molitor was retired. Cordova lined a single to right, driving in Knoblauch. Stahoviak reached on an infield single to the right side, loading the bases. Kelly then singled into right field for two runs batted in. Johnson walked to the mound and made a call to the bullpen, bringing in Rick Krivda in relief of Haynes. Minnesota now had a 7-3 advantage.

Was there any magic left? With one out in the bottom of the fifth, Bonilla drew a free pass. Robertson “threw a high changeup that Murray, uncoiling from his deep crouch, lashed into the left-field bleachers.”9 The Baltimore Sun’s Buster Olney described the moment: “Just like the old days. Eddie Murray punishing a pitcher, fans chanting in approval, a curtain call after a Murray homer.”10

Murray spoke after the game, saying, “Hopefully, there’s more of that to come.”11 With the round-tripper, Murray had cracked his first home run as an Oriole since 1988. It was the 492nd of his Hall of Fame career, but Olney told his readers, “If you include the eight homers Murray hit in the postseason, last night’s blast was the 500th of his career.”12

But the Twins still had the lead. In the top of the eighth, Stahoviak walked to lead things off. An out later, Hollins blasted a Krivda offering deep into the left-field bleachers, making the score 9-5. That would be the final score. After the game, manager Johnson lamented that “Eddie did his part. We didn’t do our part.”13

Baltimore lost their next four games, falling to 11 games behind the Yankees. They finished July with only 11 wins, but then they turned it around, winning 35 of 57 games down the stretch in August and September. With Murray as their everyday designated hitter, Baltimore finished the season with the fourth-best record in the American League (88-74-1), which did indeed earn them a playoff berth as the wild-card team. They defeated the Indians, three games to one, in the American League Division Series but lost to the Yankees in the AL Championship Series. Murray played his part, going 6-for-15 against Cleveland and 4-for-15 with a home run against New York.

In the locker room after his homecoming game, Murray was asked what 500 home runs would mean to him. He replied, “It would mean a lot if I got there. There are only two other guys that did that. [Get 3,000 hits and 500 homers.]”14 On September 6, against the Detroit Tigers, Murray swatted Number 500, a seventh-inning game-tying solo shot in front of 46,708 fans in Camden Yards. He finished the season with one more home run, a grand slam against the Toronto Blue Jays, also in front of the home crowd, giving him 501 career home runs.

Murray played only part of the following season in the majors. He signed as a free agent with the Anaheim Angels, to be close to his home in Los Angeles, and appeared in 46 games (45 as a designated hitter), belting three more homers. The Angels released Murray on August 14, 1997, and he signed with the Dodgers six days later. He made nine pinch-hit appearances before retiring at season’s end. He was elected to the Hall of Fame on his first ballot in 2003.

2 Mercker had started in 12 of his 14 appearances for Baltimore in 1996, compiling a 3-6 record and 7.76 earned-run average, but the Indians used him out of the bullpen, where he made 10 appearances for a total of 11⅔ innings pitched. Mercker signed as a free agent with Cincinnati after the 1996 season.

14 Eisenberg. The others were Willie Mays and Hank Aaron. As of the end of the 2019 season, the 3,000-500 club had added three more members: Rafael Palmeiro, Alex Rodriguez, and Albert Pujols.