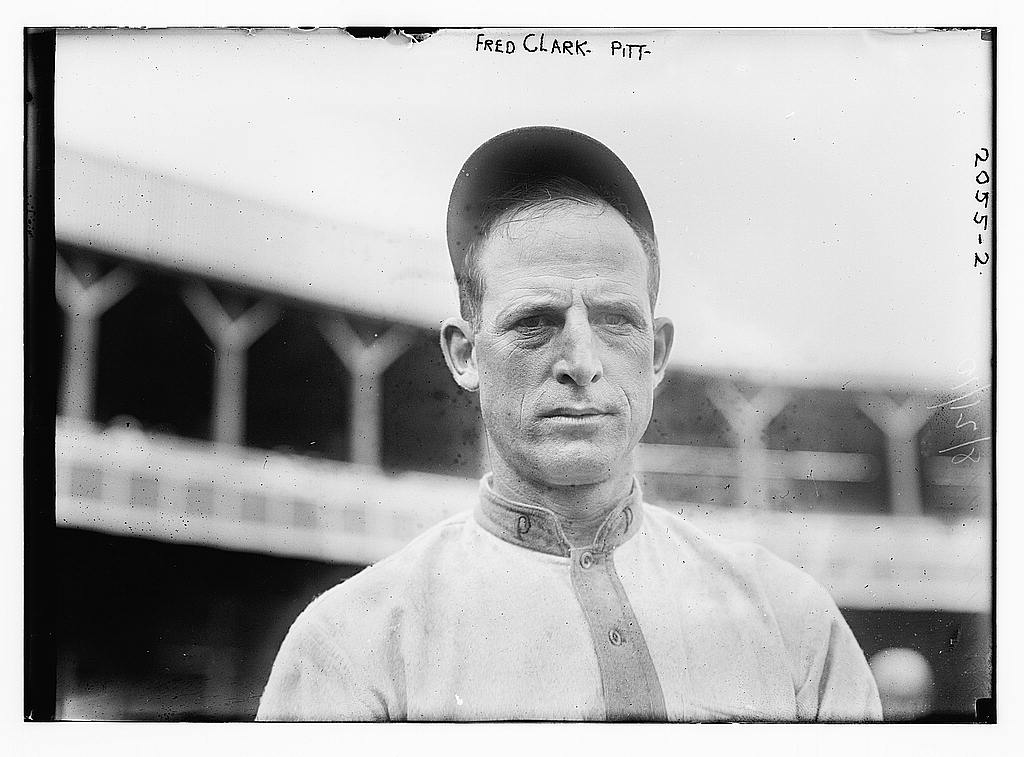 It was just past the midpoint of the 1901 season.1 Pittsburgh had been in first place in the National League since June 11. At the close of play on July 22, the Pirates held a slim, two-game lead over the St. Louis Cardinals. The next day, Pittsburgh began a three-game series against the seventh-place Cincinnati Reds. Despite a recent four-game losing streak, player-manager Fred Clarke’s Pittsburgh team seemed to be putting it all together, scoring 15 runs against the Brooklyn Superbas in their last game before hosting the Reds.

Clarke was only 28 years old. He started playing major-league baseball in 1894 for the Louisville Colonels. Three seasons later, he was their manager, too. After the 1899 season, Louisville owner Barney Dreyfuss bought the Pittsburgh Pirates and the Colonels folded. Like many of his teammates, Clarke moved to Pittsburgh, and Fred became player-manager for the Pirates. He primarily played left field, and usually batted in the leadoff or second position of the batting order.

Against the Pirates, Cincinnati’s lineup was juggled to accommodate several injuries or ailments. Shortstop Tommy Corcoran was at home in Cincinnati, “suffering from an attack of typhoid fever.”2 Right fielder Sam Crawford had a badly sprained wrist and could not play the entire game. In fact, Crawford could only “use one hand in swinging at the ball.”3 Catcher Heinie Peitz was “taking care of a damaged finger,” and second baseman Harry Steinfeldt did not make the trip to Pittsburgh, as he was also sick. Rookie Bill Fox4 was inserted to play for Steinfeldt. Harry Bay made his major-league debut5 and played center field with a dislocated shoulder.6 A third rookie, John Dobbs, who had been playing in center all season, started this game at third base. The Pittsburgh Daily Post reported that Dobbs “is a splendid outfielder but a mighty poor infielder.”7

The Reds batted first but were retired without threatening to score. In the bottom of the first, Clarke “put the Pirates in the game”9 by hitting a home run, his third round-tripper of the season. Cincinnati’s center fielder Bay could not cut the line drive off10 and ended up “chasing the ball to the 25-cent bleachers.”11 Clarke rounded the bases and scored easily.

In the second, Cincinnati loaded the bases with no outs. Two batters had bunted their way on base. The next three hitters “tried to murder the ball and were easy”12 outs. Chesbro struck out two and retired the last on a foul out. Pittsburgh’s Clarke told reporters, “They should have kept the bunting game. They were getting away with it.”13

In the bottom of the third, Clarke doubled with two outs but did not score. In the fourth, the Reds again loaded the bases, this time with one out, but Chesbro again kept them from scoring.

In the bottom of the fourth inning, Pittsburgh’s Lefty Davis lined a ball past Bay for a triple. He scored on Honus Wagner’s single for a 2-0 lead.14 Rookie Kitty Bransfield15 reached on an infield single, and both runners advanced on Claude Ritchey’s sacrifice. This proved strategic, as Tommy Leach’s single up the middle resulted in two more Pittsburgh runs off Hahn.

Two innings later, Wagner grounded a slow roller to Dobbs at third and beat the throw to first base, which sailed over first baseman Jake Beckley’s head, allowing Wagner to advance all the way to third. He scored on Bransfield’s single. The Pirates now led, 5-0.

Pittsburgh started the home half of the seventh with back-to-back singles by Clarke – his third hit of the game – and Davis. Wagner’s double brought Clarke home, but Davis was tagged out at home when he also tried to score on the play. Third-base coach Ginger Beaumont (who was the Pirates’ center fielder) put up the STOP sign, but Davis “disregarded the coach and broke for home.”16

In the bottom of the eighth, Pittsburgh tacked on three more runs, all unearned. Bransfield began the inning by reaching first when Crawford dropped his high fly ball to right. Ritchey and Leach were retired, and the Reds should have been out of the inning, but Crawford’s error had prevented that scenario. The Pirates capitalized with “some tall slugging”17 before the inning was over. Jack O’Connor tripled, Chesbro doubled, and Clarke tripled. The Pirates had now built a nine-run lead. With the triple, his fourth of the season and his fourth hit of the game, Clarke had hit for the cycle.

The Reds “escaped a whitewash by securing two runs in the ninth.” Hahn led off by striking out, and then Dobbs singled to center. Dick Harley, who had been a strikeout victim three times in the game, tripled along the right-field foul line and Dobbs scored. Beckley sent a grounder to first baseman Bransfield, who couldn’t make the play, and Harley crossed the plate. Bill Phillips pinch-hit for Crawford and grounded into a game-ending double play. The game had lasted an hour and 50 minutes.

Despite yielding 11 hits to the Reds batters, Chesbro struck out 11 in the game and “was frequently cheered for his showing on the slab.”18 The strikeout total equaled a team record for the season. He did get his 10th win and lowered his earned-run average to 2.30. Chesbro won 11 of his next 14 decisions, finishing the season with 21 wins, his first of five 20-plus-win seasons.

The Reds had runners on base in eight of the nine innings but capitalized only in the final frame. They left eight men on base through the first four innings and a total of 11 for the game.

Davis, Wagner, and Bransfield each contributed three hits to the Pirates’ assault, which consisted of 16 hits. The Pirates swept the series from Cincinnati and won 45 of their next 64 games to claim the National League pennant by 7½ games over the Philadelphia Phillies.

4 Fox played four games for the Washington Nationals in 1897, batting .286 and playing second base and shortstop. He was signed by the Reds in 1901 and debuted for Cincinnati on July 13. He played 43 games at second for the Reds in 1901, his last season in the majors.

5 In 1901, Bay had been playing for the Indianapolis Hoosiers in the Western Association, batting .303, when the Reds opened up a roster spot for him.

6 “Crippled Reds Did Their Best.”

9 “Crippled Reds Did Their Best.”

15 Bransfield was a rookie in 1901. He had played five games for the Boston Beaneaters in 1898 and then spent 1899 and 1900 with the Worcester Farmers of the Class A Eastern League. He returned to the majors in 1901 as part of the Pirates, batting .295 and playing in all but one game of the season.

17 “Crippled Reds Did Their Best.”