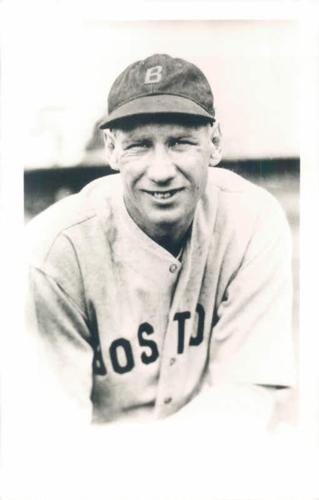 Heavy rain falling over the city convinced Gordon Cobbledick that the afternoon ballgame at League Park was awash. The hometown Cleveland Indians were scheduled to play their series finale with the Boston Red Sox, but strong storms threatened the contest. Instead of driving to the Lexington Avenue ballpark to cover the game, Cobbledick, the Cleveland Plain Dealer baseball writer, leisurely steered his vehicle toward his newspaper office.

He was stopped at a traffic light on the wet, 83-degree July day,2 when he heard the voice of Indians broadcaster Jack Graney booming out of a nearby gas station radio speaker, calling the first inning action live on Cleveland’s WHK.3

“He set a speedway record by reaching the park in time to see the Indians bat in the first,” The Sporting News reported a week later, on July 30, 1936.

What Cobbledick missed in the top of the first inning was Indians starter Oral Hildebrand getting off to a shaky start by walking the first two Red Sox batters, Mel Almada and Doc Cramer. Subsequently, Heinie Manush laid down a sacrifice bunt, moving the runners to second and third. Hildebrand, who was 7-7 entering the contest, settled down, however, to retire Jimmie Foxx on a pop fly and John Kroner on a line out to left field to end the threat.

As Cobbledick settled in the press box with fellow scribes including the Cleveland Press’s Franklyn Lewis — he was spotted wearing huge amber goggles on this dark Cleveland day4 — Boston starter Fritz Ostermueller retired the Indians’ top of the lineup in order.

Had it not been for the serendipitous event at the stoplight, Cobbledick could have been absent for much of the excitement that began in the bottom of the second inning.

Hal Trosky led off with a single to right. Frankie Pytlak doubled to left, pushing Trosky to third. Roy Weatherly got the third consecutive hit off Ostermueller with a single over first that scored Trosky and Pytlak to give the Indians a 2-0 lead.

The Red Sox matched the Tribe’s scoring efforts in the top of the third when Kroner smacked a double to left, sending home Foxx and Manush home to even the game at 2-2.

It was Boston’s scoring barrage in the fourth inning, however, that cast more gloom and turned the dreary day even darker for the few Cleveland faithful who had braved the storm to show up at the ballpark.

Eric McNair began the attack by slapping a double to the right-field corner.5 Rick Ferrell then singled to score McNair. Two Red Sox batters later, Cramer cracked a single to center that scored Ferrell to give the visitors a 4-2 lead.

It marked the end of the day for Hildebrand. Cleveland skipper Steve O’Neill removed the right-hander in favor of lefty Thornton Lee, who fared no better.

As rain drizzled, Manush singled to load the bases with one out. Foxx grounded to third baseman Odell Hale, who tossed to second to start an inning-ending double play. But Roy Hughes dropped the ball, and everyone was safe, including Ostermueller, who had crossed the plate with Boston’s fifth run. Hughes was charged with an error on the play.

Kroner continued his sharp hitting. He brought home Manush and Cramer and sent Foxx to third with a single to center field. The scoreboard showed Red Sox 7, Indians 2.

Lee caught a break when Billy Werber grounded to Hale. The third baseman’s throw home to the catcher Pytlak nabbed Foxx for the second out. But McNair singled to left, sending Kroner home and Werber to third. Boston led, 8-2.

As Rick Ferrell stood at the plate, McNair made a dash for second and was safe when Pytlak made a wild throw to third trying to pick off Werber. The ball got away from the third baseman and Werber scored the relentless Red Sox’ seventh run of the inning, giving them a 9-2 advantage. McNair ran to third.

Lee then walked Ferrell, but found his way out of the inning when Ostermueller grounded to second.

The Indians, having won the series’ first two games and 11 of their last 12, bounced back in hopes of a sweep. The rally began in the fifth when Trosky doubled to score Earl Averill from second. Pytlak, making amends for his throwing blunder earlier, singled to left to score Trosky. After five innings, Cleveland trailed, 9-4.

The Indians inched closer in the bottom of the sixth. Bill Knickerbocker led off the inning with a single. The Red Sox replaced Ostermueller with lefty Jack Wilson to face pinch-hitter Bruce Campbell. He doubled and Knickerbocker raced to the plate from first base.

The scoreboard now read 9-5 in the visitors’ favor.

Wilson retired the Indians’ first two batters in the bottom of the seventh inning, but four consecutive base hits followed. Joe Vosmik singled, and so did Knickerbocker, putting runners on first and second. Billy Sullivan then bopped a double into the soggy outfield, scoring Vosmik and Knickerbocker. The Red Sox’ lead was down to two runs, 9-7.

Wilson then gave up another double. This time it was Hughes with a smash that scored Sullivan from second.

The few spectators must have been thrilled with their team’s rally. Cobbledick must have been thankful for the gas-station radio. After falling behind, 9-2, in the fourth, the Indians now were within a run, 9-8.

Boston did no damage in the top of the eighth, and sent Jack Russell in to pitch in the bottom half of the inning. The Tribe got a one-out single from Manush, but he advanced no farther than second base.

Indians lefty Lloyd Brown held the Red Sox scoreless in the top of the ninth, preserving his team’s one-run deficit heading into its final at-bat.

Hope blossomed for the Tribe when Vosmik got his second single of the day. Knickerbocker next laid down a sacrifice bunt, sending his teammate to second with one out.

“A duel of managerial wits brought Boston pitcher Lefty Grove to the box,” Cobbledick wrote in the next day’s Plain Dealer. “With Vosmik on second, O’Neill called Milt Galatzer from the bench to bat for Lloyd Brown, whereupon [Boston coach Al] Schacht substituted the left-handed Grove for Russell. O’Neill then met this move by removing Galatzer in favor of Joe Becker, a right-handed batter.”

Becker grounded out to second on Grove’s first pitch. Vosmik advanced to third and was 90 feet away from tying the game and completing the comeback. Boston’s strategy, however, won out when Grove forced Hughes to ground out to short to end the game and give the Red Sox a 9-8 victory.

Ostermueller earned his seventh win of the season, and the Indians’ Hildebrand dropped to 7-8.

The loss, coupled with a Yankees 15-3 win that day in St. Louis, dropped the Indians to eight games behind New York in the American League standings.

A total of 17 runs and 31 hits — the Indians had 18 of those — must have made for an entertaining Thursday afternoon at the damp ballpark, even with the home team coming out on the losing end.

“A very game ball club, those Indians,” Cobbledick wrote in the Plain Dealer. “A ball club that looks good losing.”

Many Cleveland fans, however, missed it. Only about 2,000 spectators filled seats at League Park for what some accounts say was a terrible day of rain, thunder, and lightning.

The Plain Dealer reported that two thunderstorms struck the city. A street car conductor was burned by lightning, a chimney fell on a restaurant, trees dropped and streets flooded.6

“Heralded by high winds and the most crescendos heard here this year, bolts from the storm caused close to $4,000 fire damage, as more than an inch of rain ended an eighteen-day drought record,” a Plain Dealer page 1 story reported.

Meanwhile, back at the newsroom, Cobbledick wasn’t as happy.

He didn’t mention nearly missing the game in his next day’s story; however, he was quick to express his opinion about the decision to play the contest.

“The Cleveland management chose to play the game in spite of a deluge of rain in the early afternoon that left the outfield soggy and the foul ground surrounding the infield an oozy morass,” Cobbledick wrote in the first few paragraphs.7

“They chose to play because the Indians had the Red Sox on the run and they didn’t propose to let the visitors get out of town without taking another shot at them,” he continued. “As things developed, it might have been better to have let them go.”