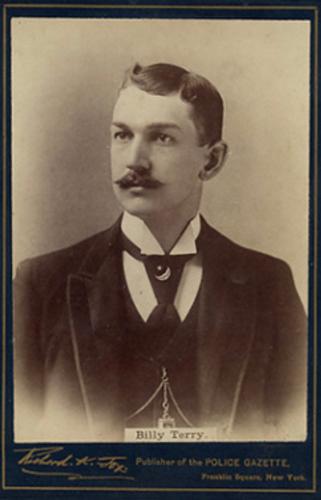 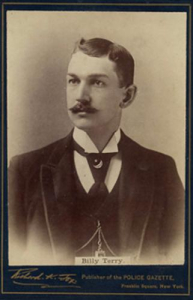 But Terry’s performance was not uniformly reported as a no-hitter in the New York City, Brooklyn, and St. Louis newspapers. The sticking point was Arlie Latham’s sixth-inning grounder to Brooklyn shortstop Germany Smith. Some reports called it an error; others had it as a single.

St. Louis had led the American Association at the previous season’s end, taking the title by 16 games over the second-place Cincinnati Red Stockings. They were well ahead of the pack again in 1886, with a 52-26 record and an 8½-game lead over the Pittsburgh Alleghenys, entering play on July 24. Brooklyn was in fourth place, 11 games back.2

The Louisville Colonels had shut out Brooklyn 7-0 the day before. So Terry’s outstanding performance with Jimmy Peoples behind the plate was a welcome rebound. The Brooklyn Daily Eagle commented on the peculiarity of his triumph in the context of the team’s recent uneven playing, calling it a “singular anomaly” and opining that the no-hitter would more likely have occurred as “the result of a series of continuous victories.”3

Brooklyn banged away at Dave Foutz, garnering five base hits through the first five innings against the righty; Foutz went on to lead the American Association with 41 wins, a .719 winning percentage, and a 2.11 ERA in 1886. The game’s only run was scored in the eighth inning. Ed Swartwood got on base with a two-out single and stole second; Bill Phillips’ groundball went to “the only unguarded part of the field at right center” for a triple to send his teammate home.4

Terry, who contributed a base hit and a stolen base to Brooklyn’s half of the scorecard, stifled the St. Louis lineup, but it was not a perfect outing.

Latham got to first base in the sixth when his groundball to short evaded Smith’s glove. Soon the Browns had a runner on third: Latham took off on a steal of second and continued to third on Peoples’ wild throw. But redemption for Brooklyn’s backstop emerged suddenly when he fired a pickoff to third baseman George Pinkney during the next at-bat and nailed Latham, preserving the scoreless tie.5

After Peoples and Pinkney’s play, Terry held the Browns hitless over the final three innings and earned the win when Swartwood and Phillips came through in the eighth. The full extent of his accomplishment, however, was a matter for debate.

The New York Sun chronicled the game as a no-hitter, acknowledging the Brooklyn nine’s ensemble in the victory: “(Terry’s) field support was brilliant, and, although three errors were made, they had little or no bearing on the game. Peoples’s work as back stop was very brilliant.”6

Also awarding a no-hitter classification was the New York Herald, at least in the box score. But the account’s verbiage tells a different story: “The great battery work of Terry and Peoples for Brooklyn in the last game, when the St. Louis boys failed to get a base hit until the ninth inning, aroused a universal feeling as to the outcome when the two clubs come together again with the same batteries in position.”7 (The article, however, did not specify which Brown may have hit safely in the ninth inning.)

The Eagle noted that at least one member of the press corps – which had the responsibility of scoring the game – credited a hit for Latham, even though Smith admitted his error.8 The New-York Tribune was one of those outlets, calling Latham’s hit “a rather doubtful affair” but still noting it in the box score.9

The Brooklyn Daily Times did not specifically indicate a no-hitter in its reporting, declaring Terry’s outcome to be “an unparalleled feat.”10

St. Louis sportswriters were also split. Terry received accolades from the St. Louis Post-Dispatch, which did not classify the effort as either a no-hitter or a one-hitter in its extraordinarily brief summary: “The game between the Browns and the Brooklyns showed that Terry is a terrible pitcher when he is in proper form.”11

The St. Louis Globe-Democrat gave a no-hitter designation,12 but the St. Louis Sunday Sayings reported that the Browns “made one little scratch hit.”13

In its summary of games, the St. Louis-based publication The Sporting News, which had debuted four months earlier in March 1886, tagged the contest as a “splendid game” accompanied by a box score reflecting no hits by the Browns.14

Elsewhere in the Midwest, the Kansas City Times reported on Terry “shutting St. Louis out without a single hit” and qualified Swartwood reaching second base because of a passed ball rather than a clean theft.15

Brooklyn manager Charles Byrne – who was also one of the club’s founders – received plaudits for his strategy, notably employing Pop Schriver in the lineup to replace Jim McTamany, who had sprained an ankle in the previous day’s loss to Louisville.16 The Daily Times honored, “It was feared that McTamany’s absence from illness would be a great disadvantage to his club, but Byrne was equal to the emergency, and by judicious shifting of some of his regular fielders and the use of Schriver in the right field the nine was nearly as strong as ever.”17

Schriver batted third, which had been occupied by Swartwood in the Louisville game; Swartwood moved to the fifth slot with Phillips remaining as the cleanup hitter. Peoples showed his dexterity on defense, switching positions from center field to catcher for the contest against St. Louis.

It took an hour and 45 minutes for Terry and Foutz to each retire 27 batters. The Herald counted more than 7,000 people at the game and at least 400 women.18 The Tribune had the number of 7,500 without categorization by gender.19 The Daily Times counted “nearly 5,000.”20

When Latham banged a fly ball to Schriver in right field for the last out, it was a moment of terrific pride for Brooklyn’s supporters. “[The] crowd rushed on the field for Terry, and he was cheered to the echo all the way to the club room,” reported the Eagle.21

Terry’s blanking of the Browns was his fourth consecutive victory and one of five shutouts he tossed in 1886.22 The right-hander started 34 games and got a decision in each one, going 18-16. He threw another no-hitter in 1888 against Louisville.

The Brooklyn team’s genesis had begun in 1883, when it joined the Inter-State Association of Professional Baseball Clubs. The following year, Brooklyn became a member of the American Association. It joined the National League in 1890, enjoying several unofficial labels in the ensuing decades: Bridegrooms, Dodgers, Trolley Dodgers, Robins. In 1932 the team officially adopted the Dodgers name.

For St. Louis, Terry’s gem came in the seventh game of a grueling 12-game road trip. Their efforts against the Eastern ballclubs yielded a 7-5 record.23 Regardless of whether their shutout loss in Brooklyn was a no-hitter or one-hitter, the Browns recovered, rolling to their second of four consecutive American Association titles, then beating the National League’s Chicago White Stockings in a “World Championship series” in October. Brooklyn finished 1886 in third place, 16 games back.

The author would like to thank Adele Heagney, Reference Librarian at the St. Louis Public Library’s Central Library, for her assistance in providing digital copies of the game’s account in the St. Louis Globe-Democrat and St. Louis Sunday Sayings.

8 “Not a Single Safe Hit.” The Eagle described the goings-on among the reporters, which may raise a concern or two regarding the integrity of the unnamed reporter awarding a hit. “One of the New York scribes present who had asserted that Latham would make a hit in the game, gave him a hit on this error and it was so recorded by some of them. But it was simply a muff, Smith afterward acknowledging it to be such.”

18 “Baseball on Many Diamonds.”

22 Two days before the no-hitter, Terry had triumphed over the Browns with a one-hitter and a 1-0 score. Brooklyn had three hits in the game.

23 The last game of the trip was a 13-4 victory over the Philadelphia Athletics, which began a 12-game winning streak.