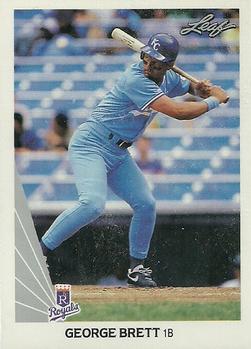 A day after George Brett powered the Royals to a 6-1 victory over the Toronto Blue Jays, the Salina (Kansas) Journal labeled him as “a one-man gang for the Kansas City Royals.”1 Brett, the American League Player of the Week,2 accomplished the rare feat of hitting for the cycle on July 25, 1990, doing it for the second time in his major-league career.

Kansas City (44-50) was visiting Toronto (51-45) for a three-game series, and this was the middle contest. A crowd of 49,855 showed up at SkyDome for the Wednesday night game. The Royals had bested the Blue Jays, 5-3, in the first game, a 13-inning affair. Even though first-place Toronto had lost, the Blue Jays remained a game ahead of the Boston Red Sox in the AL East standings coming into this game.3 The Royals were last in the AL West, 16 games back of Oakland.

Andy McGaffigan (5.66 ERA) was named as a last-minute emergency starter by KC manager John Wathan. The original scheduled starter, Luis Aquino, pulled a muscle under his right arm while warming up before the game, and McGaffigan “had about five minutes to warm up.”4 The journeyman right-hander had started the season with San Francisco, was released on April 25 and signed by the Royals on May 9. After seven relief appearances (his longest outing was only 3⅓ innings), this was McGaffigan’s first start for Kansas City. He was opposed by Toronto’s Todd Stottlemyre (9-10, 4.43 ERA). The Blue Jays righty had lost his previous three starts.

Stottlemyre was roughed up from the get-go. Kevin Seitzer grounded the first pitch of the game into center field for a single. After Bill Pecota struck out, Gerald Perry singled, as did Brett, loading the bases. That brought Jim Eisenreich to the plate. He hit a grounder to second baseman Manuel Lee, who threw to shortstop Tony Fernández, covering second. Brett was forced out, but Seitzer scored. Willie Wilson followed with a double, plating Perry.

McGaffigan breezed through the first two frames, six up and six down. In the top of the third, Kansas City attacked Stottlemyre again. With one down, Brett launched a triple to deep center. The ball hit the center-field wall just to the right of the 400-foot sign and about four feet from the top. Center fielder Mookie Wilson fell to the ground trying to field the carom and Brett kept running, all the way to third base.5 Eisenreich hit another groundball to second, and Brett scored, giving Eisenreich his second groundout RBI of the game. Willie Wilson singled and then Jeff Schulz doubled down the right-field line. The speedy Wilson scored from first base, and the Royals led, 4-0.

McGaffigan used just 11 pitches in the bottom of the third, again retiring the Blue Jays in order. With the top of the Kansas City lineup due up in the top of the fourth, Toronto skipper Cito Gaston called for Frank Wills to take the mound in place of Stottlemyre. He proceeded to strike out both Seitzer and Pecota, and he induced Perry to pop out to the catcher in foul territory.

McGaffigan retired Mookie Wilson and Fernandez to start the fourth, giving him 11 straight outs to start the game. However, Kelly Gruber stroked the first pitch he saw to short right to break up the no-hitter, but George Bell forced Gruber out at second to end the inning.

Brett led off the fifth, pulling a groundball into the right field corner for a double. Two outs later, Schulz traded places with him, as he, too, doubled down the right-field line.

McGaffigan trotted to the mound in the bottom half with a 5-0 advantage, but he faltered. Fred McGriff worked a full-count walk. John Olerud singled, and the Blue Jays had a mini-rally. But Pat Borders popped out and Lee lined into a double play. Although McGaffigan didn’t allow a run, he had thrown 64 pitches. Wathan called to the bullpen for action, and Mel Stottlemyre Jr. entered the game to pitch the sixth. The older brother of Toronto’s Todd Stottlemyre (and son of Yankees pitcher Mel Stottlemyre Sr.), Mel Jr. was a rookie in 1990, and this was just his second career appearance.6 He pitched two innings, allowing a single in each, but he preserved the shutout.

In the top of the seventh with Wills still pitching for Toronto, Brett blasted an 0-and-2 pitch over the wall in deep center. He had just hit for the cycle, and it was the second time he had done so in his Hall of Fame career. In the clubhouse after the game, Brett commented, “I thought I’d give it one shot for the homer. But when it was 0-and-2 I was just trying to make contact. You would think after 17 years I would know by now that I’m not a home-run hitter. I don’t know what he threw at 0-and-2, but I do know that I hit it good.”7

In the top of the eighth, Toronto spoiled the Royals’ chance for a shutout when Glenallen Hill homered to deep left field, his eighth round-tripper of the season. The solo shot came off Mark Davis, Kansas City’s third pitcher. That made the score 6-1, and that’s where the final score stood. Brett did bat again in the ninth, but after a leadoff single by Perry, Brett grounded into a 4-6-3 double play.

Regarding his two career cycles, Brett said, “I don’t remember what was going through my mind 11 years ago. But I do remember hitting a homer off Sammy Stewart in the 16th inning.”8 He added, “[Orioles manager] Earl Weaver was not a happy camper.”

Todd Stottlemyre lasted only three innings for Toronto and lost his fourth straight game. He was tagged for four runs on seven hits and a walk. After the game, he proposed a surefire solution for getting Brett out: “You should turn and throw the ball to second and hope you beat him there. But when he’s swinging like that, there isn’t much you can do.”9

Kansas City earned its fourth consecutive victory in handing the Blue Jays their third straight loss. Toronto dropped into a first-place tie with the Boston Red Sox. McGaffigan picked up his first victory of the year. The three Royals pitchers had combined to limit the Blue Jays to just six hits, five of them singles.

In putting together a 4-for-5 performance at the plate, Brett extended his current hitting streak to 15 games. During that span, he was 29-for-63, a .460 batting average, raising his season average to .304, above the .300 plateau for the first time in the season. This game energized the 37-year-old, and, except for the first week of August, he kept his batting average above .300 for the rest of the 1990 season. Coincidentally, Brett’s batting average for both the 1979 and 1990 cycle-hitting seasons was exactly the same: .329. In 1990 that mark led the American League, as did his doubles total for the season (45).10

In addition to the sources mentioned in the Notes, the author consulted baseball-reference.com, mlb.com, sabr.org and retrosheet.org. Thanks to Bruce Slutsky for advice regarding cycles.

3 The lead didn’t last: The Blue Jays finished two games back of Boston.

6 This was Mel Stottlemyre Jr.’s only year in the majors, and the only game in which both brothers appeared. As American League pitchers, they never faced each other.

10  Despite Brett’s performance, the Royals finished sixth out of seven teams in the AL West: 27½ games back of Oakland.