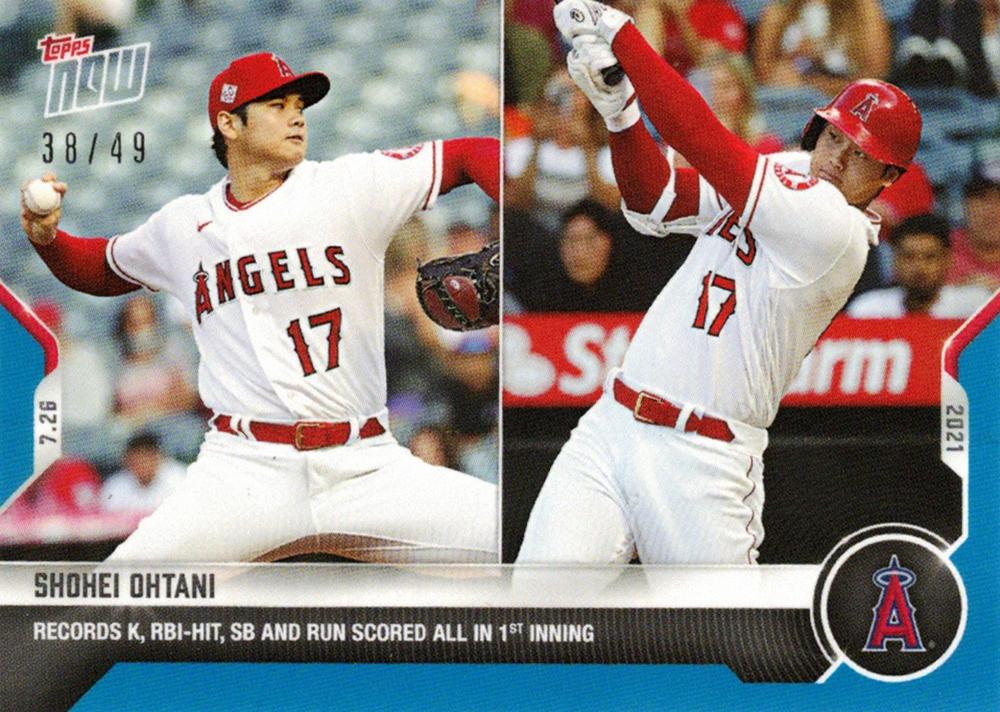 The 22,751 fans attending the opener of the Los Angeles Angels’ seven-game homestand on July 26, 2021, could expect a pitchers’ duel. Both starters, Shohei Ohtani for the Angels and Germán Márquez for the Colorado Rockies, had appeared in the All-Star Game, hosted by the Rockies, just two weeks earlier.1 The Angels were 49-49, fourth in the American League West Division, 11 games behind the Houston Astros. The visiting Rockies were fourth in the National League West at 43-56, 19 games behind the San Francisco Giants.2

Ohtani (4-1, 3.21 ERA), who had celebrated his 27th birthday on July 5, was making his second start on the mound after the All-Star Game, and batting second in the Angels’ lineup. It was a remarkable resurgence as a two-way player after a series of injuries, including elbow damage requiring Tommy John surgery, limited Ohtani to three pitching appearances from June 2018 through spring 2021 and left the 2018 American League Rookie of the Year a .190 hitter with a .657 OPS in the pandemic-shortened 2020 season.

Taking regular turns at bat when he pitched for the first time in his career, and serving as the Angels’ designated hitter otherwise, Ohtani entered the game with a .362 on-base percentage, .684 slugging percentage, and a league-leading 35 home runs, the most recent a day earlier against the Minnesota Twins.

His achievements had been recognized with the AL Player of the Month Award for June.3 Earlier in July, Ohtani had added the 2021 ESPY Award as the Best MLB Player.4 Baseball had even changed All-Star Game rules to accommodate Ohtani’s nearly unprecedented array of talent and dual All-Star selection as a designated hitter (by fan vote) and starting pitcher (by player vote), allowing him to remain in the game as the AL’s designated hitter after his pitching stint was over.5

Against the Rockies, Ohtani started with a strikeout of Raimel Tapia. After allowing a two-out single to Charlie Blackmon, Ohtani ended the inning by fielding Trevor Story’s sharp grounder up the middle and throwing out the Rockies’ star shortstop at first. Impressed, Story asked him “How did you catch that?” Ohtani just smiled in response.6

Márquez (8-7, 3.50 ERA) took the mound for the Rockies. David Fletcher opened the first inning with a grounder that took an odd bounce over third baseman Joshua Fuentes’ glove for a single. With Ohtani at the plate, Fletcher took second on a very wild pitch – it flew completely over the catcher. Ohtani’s broken-bat single scored Fletcher to put the Angels on the board.

After at least five pickoff attempts, with the crowd booing each throw, Ohtani stole second, his slide evading the attempted tag for his 14th steal of the season. Jared Walsh – like Ohtani and Màrquez an All-Star in 2021 – lined a hit into right, allowing Ohtani to score standing. José Iglesias singled, but Márquez got the next two outs to limit the damage to two runs.

With that inning, Ohtani added his name to the history books. He became the first pitcher to throw a scoreless half-inning and record a hit, an RBI, and a stolen base, and score a run in the same inning7 while playing in an AL ballpark since Luis Tiant for the Twins on April 26, 1970, three years before the AL adopted the designated-hitter rule.8

The only baserunner in the second and third innings for either team was Colorado’s Connor Joe, who doubled in the top of the second. Ohtani struck out in the third, swinging at a pitch that bounced on the plate.

With one out in the top of the fourth, Ohtani hit Story at the base of his left ring finger. 9 After being checked carefully by the Rockies’ trainer, Story stayed in the game, although the camera caught him flexing his hand in the dugout afterward. Sam Hilliard lined a two-out single to put two on for Joe, who popped out to end the frame. Ohtani apologized to Story as he walked back to his dugout from second base.

All Márquez allowed in the bottom of the fourth was a long double to Max Stassi.

The Rockies got on the board in the top of the fifth on a one-out home run by Dom Nun͂ez. Tapia followed with a single down the left-field line – he thought about second, reconsidered, and dashed back to first. Brendan Rodgers grounded toward second, where shortstop Iglesias fumbled the ball but recovered in time to flip to second for the force out of Tapia. The Rockies challenged the out call, but it was confirmed. A passed ball allowed Rodgers to take second, but Blackmon’s groundout left him there with the score 2-1, Angels.

No runner reached base in the bottom of the fifth inning. Ohtani grounded to second.

Ohtani worked a one-two-three top of the sixth, including one strikeout.

The Angels threatened to add on in the sixth. Walsh hit a one-out single, then made it to third on Brandon Marsh’s double to left-center. Apparently injured on his dash, Walsh grimaced and grabbed his side while standing on third.10 He didn’t have to run any further – Stassi looked at a borderline called strike to end the inning.

With his pitch count only at 87, Ohtani returned in the seventh. He went to a full count on Joe, but got a strikeout on the sixth pitch. Fuentes flied out. Ohtani threw a 100-mph cutter as his 99th pitch of the game,11 striking out Nun͂ez for his 100th strikeout of 2021. He left the mound with a fist pump.

The Angels added to their lead in the bottom of the inning, helping to seal Ohtani’s fifth win of the season. Adam Eaton grounded toward second. On the super-slo-mo replay, the ball appeared to arrive in first baseman C.J. Cron’s glove just as Eaton’s foot hit the bag. The initial call was “safe.”

Rockies manager Bud Black tried to talk the umpires into a crew-chief review – since the earlier unsuccessful appeal had left him without a challenge – but his appeal was unsuccessful.

Jack Mayfield fouled a ball off his ankle and collapsed in apparent pain. The trainer and manager checked on him and he stayed in the game. He didn’t have to worry about running hard after his hit – he homered just inside the left-field foul pole for a 4-1 Angels lead.12

With one out, Ben Bowden replaced Márquez. Ohtani stepped to the plate to the crowd’s chants of “MVP” but struck out swinging. Bowden also struck out Justin Upton to end the inning.

At this point, Angels manager Joe Maddon turned to his bullpen. Unlike in the All-Star Game, baseball’s rules during 2021’s regular season did not allow Ohtani to remain in the game at designated hitter when his pitching stint was over. In four of his 13 starts in 2021, Ohtani had moved to right field after pitching, but this time he left the game completely.13

With veteran lefty José Quintana on in relief, the Rockies made it closer in the eighth. Rodgers homered to center with one out. Blackmon followed with a single to center, leading to another pitching change.

Side-armer Steve Cishek escaped the inning without a run scoring thanks to the ground rules – Cron’s two-out double bounced into the stands so Blackmon had to hold at third. Hilliard’s fly ball to the wall left him there with the score 4-2, Angels.

Rockies reliever Justin Lawrence got one quick out in the bottom of the eighth, then ran into trouble. José Iglesias hit a seeing-eye single into left and Marsh walked, putting two on for Stassi.

Stassi hit a liner into center-right field. Blackmon missed the ball so Iglesias scored. No error was charged to Blackmon, but given the angle of the hit and Blackmon’s facial expression, it appeared that he lost the ball in the lights.

Lefty Zac Rosscup was called in to face Eaton. After a 10-pitch battle, Eaton flied out to right, deep enough for Marsh to score. Stassi headed for second while the Rockies were trying for an out at the plate. He didn’t beat the throw from catcher Nuñez so that ended the inning with the score 6-2, Angels.

Raisel Iglesias struck out the side in the top of the ninth to hold the score, giving Ohtani his fifth win of the season.

With five strikeouts in seven innings, it was well below Ohtani’s 2021 average of 10.8 strikeouts per nine innings, but he had not allowed any walks. Although he didn’t have his best “stuff” in this game, his in-game pitch selection adjustments allowed him to keep the hitters off balance.14 His 100th strikeout of the season gave him another milestone: Before Ohtani, no major-league player had ever recorded triple-digit strikeouts and hit more than nine home runs in the same season,15 further highlighting Ohtani’s unique status as a two-way player.16

The Rockies and the Angels both finished fourth in their respective divisions, as they had in 2020 and 2019.

Ohtani was unanimously voted the American League MVP, received the AL Silver Slugger Award as a designated hitter,17 and 2022 ESPY Awards for the Best MLB Player and Best Male Athlete.18 His multiple talents were certainly on display in this game.

In addition to the sources cited in the Notes, the author consulted Baseball-Reference.com and Retrosheet.org for pertinent information, including the box score and play-by-play. She also viewed the recorded game on MLB.tv (Angels broadcast).

1 Both had pitched scoreless innings. Ohtani was the AL starter, Márquez pitched the fourth inning for the NL.

7 The combination of hit, RBI, steal, and run scored by a pitcher in one inning is not common. None of the 16 pitchers active in early 2021 who had at least one stolen base achieved that combination in their career. See Chet Gutwein, “When Pitchers and Stealing Bases Collide,” fangraphs.com, April 30, 2021, for the list of the 16 pitchers. https://blogs.fangraphs.com/when-pitchers-and-stealing-bases-collide/. Retrieved August 23, 2022. Matt Peacock matched Ohtani’s achievement when he hit an RBI single, stole a base, scored, and pitched a scoreless bottom of the fourth inning while pitching for the Diamondbacks on August 6, 2021. Given the universal DH starting in 2022, only a two-way player such as Ohtani is likely to achieve that in the future. See https://stathead.com/tiny/Bfkkw for the 2021 statistics.

8 Daniel Guerrero, “Ohtani Pitches, Hits and Runs Through Rox,” mlb.com, July 27, 2021. https://www.mlb.com/news/shohei-ohtani-does-it-all-against-rockies?utm_source=ground.news&utm_medium=referral. Retrieved July 26, 2022. Tiant pitched scoreless tops of the sixth and seventh innings, with his feats on the basepaths in the bottom of the sixth.

9 The Angels TV broadcasters joked that a dozen general managers must have winced when Story was hit, since Story had been discussed as a trade target and the deadline was approaching. Thomas Harding, “Story ‘Pretty Lucky’ After Ohtani HBP,” mlb.com, July 27, 2021. https://www.mlb.com/news/trevor-story-back-in-lineup-after-hit-by-pitch. Retrieved July 21, 2022. Story was not traded in 2021, but signed with Boston as a free agent after the lockout ended in March of 2022.

12 Mayfield was replacing the injured Anthony Rendon. After two games with the Angels in April 2021, Mayfield was designated for assignment and claimed by the Mariners. They designated him in June – and he was reclaimed by the Angels. Since rejoining the Angels his stats had improved significantly: .241 BA, .911 OPS with three home runs in 29 at-bats. Luca Evans, “Mayfield Continues to Help, Homers in Angels’ Victory.”

13 For the 2022 season, MLB changed the rule to allow two-way players to remain in the game as the designated hitter after they finished pitching. As Ohtani was the only player the rule would apply to when it was adopted, it was referred to as the “Shohei Ohtani rule.” Joel Sherman, “MLB, Union Agree to Temporary Expanded Rosters, ‘Shohei Ohtani rule,’” nypost.com, March 22, 2022. https://nypost.com/2022/03/22/mlb-union-agree-to-temporary-28-man-rosters-shohei-ohtani-rule/. Retrieved August 21, 2022.

15 Gonzalez. Any discussion of two-way players inevitably leads to Babe Ruth. He pitched three seasons with more than 100 strikeouts (1915, 1916, and 1917) but those were during the Deadball Era. Ruth’s home-run totals for those years were four, three, and two respectively. Not until 1918 did Ruth lead the majors in home runs – with 11. He pitched in only 20 games that year, recording 40 strikeouts. Ruth certainly met both the criteria – just not in the same year.