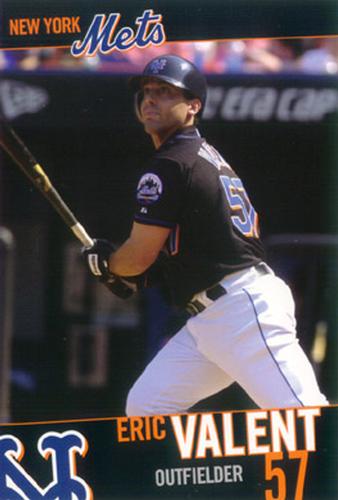 Getting a rare start for the New York Mets, left fielder Eric Valent joined the club of those who accomplished the rare feat of hitting for the cycle. Even more rare was the fact that Valent smashed a ground-rule home run in addition to his single, double, and triple.

In his fourth major-league season, reserve outfielder Valent was making his 29th start and playing in his 77th game of 2004. In his first three years (2001-2003), he played in only parts of 47 games. For this game Mets manager Art Howe gave Valent the start, giving Cliff Floyd a day off, joking, “Wally Pipp Floyd took the day off,”1 in an obvious reference to Wally Pipp, who took the day off, was replaced by Lou Gehrig, and “was never heard from again.”2 Valent was penciled into the seventh spot in the batting order.

Al Leiter (6-3) took the mound for New York, opposed by Montreal’s Rocky Biddle (2-4). A crowd of 20,042 showed for the Thursday afternoon game at Olympic Stadium. Coming into the contest, the Mets and Expos were in fourth and fifth place, respectively, in the National League’s East Division. Montreal held the dubious distinction of having the lowest number of runs scored in the majors (359), through 101 games.

Both Biddle and Leiter pitched scoreless first innings, but the Mets erupted in the top of the second. Ty Wigginton led off with a single to center. On a 1-and-0 pitch, Mike Cameron blasted a two-run homer. Valent followed with an infield single toward first base. David Wright got the fourth consecutive hit of the inning by lining a double down the left-field line, and Valent stopped at third. After Biddle retired Leiter and Kazuo Matsui, he walked Todd Zeile to load the bases. Mike Piazza took a strike and then singled to center, plating both Valent and Wright. The Mets led, 4-0.

Leiter walked two in the Expos’ half of the second, but he did not allow a run. With one out in the top of the third, Cameron worked a full count and then sent Biddle’s next offering over the fence in left-center field. Again Valent followed Cameron’s home run with a hit of his own, this time a line-drive double to left, but he was stranded when Biddle retired both Wright and Leiter to end the inning. Biddle’s part in this game also ended; he was relieved by Sun-Woo Kim to start the fourth inning.

Woo kept the Mets off the board in the fourth, but not in the fifth. After striking out Wigginton, Kim walked Cameron. Cameron stole second base on the first pitch to Valent, and on Kim’s next offering, Valent swung hard and launched the ball into a speaker hanging from the ballpark’s roof. The smash never left the park, causing the official scorer to proclaim it as ground-rule home run. Valent remarked, “I didn’t know if it was a double.”3 Kim clearly did not have his best stuff; he walked Wright, the next batter. Leiter struck out for the third time in the game, and then Woo threw a wild pitch with Matsui batting, and Wright scampered to second. Matsui struck out as well, but Woo’s day was finished. In the first five innings, Biddle and Woo had combined to face 28 New York batters, allowing seven runs (all earned) on nine hits and four walks. Roy Corcoran became to third Montreal hurler in the top of the sixth.

Meanwhile, Leiter was keeping the Expos bats silent. Through five innings, he had allowed just one hit, a double by Jose Vidro in the first inning. In the sixth, however, Leiter’s effectiveness dimmed. He threw 28 pitches and was tagged for a single by Orlando Cabrera and an RBI double by Juan Rivera. When Nick Johnson grounded out to short to end the inning, Leiter went into the dugout and stayed there. Pedro Feliciano and Dan Wheeler finished the mound duties for the Mets, pitching shutout ball.

The Mets, leading 7-1, were not done, though. Wigginton singled to lead off the seventh. Cameron forced him at second for the first out. In his fourth at-bat of the day, left-handed batter Valent pulled the ball into the right-field corner and then burned around the bases, not stopping until he slid into third base and the record books. “When I hit the ball into the corner like that, I knew I was going to third,” Valent said. “I just wanted to hit the ball hard.”4 He became just the eighth Mets player in history to hit for the cycle. 5 “It’s cool,” he told reporters. “Not a lot of guys can say they’ve hit for the cycle, no matter how long you play. I knew I had a chance. [Concerning the triple,] I just didn’t know if [right fielder Rivera] was going to field it cleanly.”6 Time was called and the ball was retrieved for Valent, who was going to “put the ball with all the ones he has from other meaningful hits [which] are all just sitting in his sock drawer back home.”7 Wright followed with a double, and Valent trotted home.

An inning later, Richard Hidalgo homered with two outs, giving the Mets their 10th run. Wigginton singled, his third of the game, and advanced to second on a wild pitch to Cameron. Cameron walked, bringing up Valent for the fifth time in the game. He worked the count full and then also walked, loading the bases. But Wright grounded out and the Mets scored no more. The Expos loaded the bases in the bottom of the ninth, but Wheeler worked out of the jam and kept the home team off the scoreboard. The final score was 10-1 in favor of the New Yorkers. The 38-year-old Leiter picked up his sixth victory of the season and lowered his ERA to 2.18, while Biddle was saddled with his fifth defeat. Cameron went 2-for-3, with two home runs and two walks, and he scored four times.

Valent’s line score was 4-for-4 with a walk, three runs scored, and three driven in. This tied his career high for hits in a game. He became the fourth player in 2004 to hit for the cycle, joining Milwaukee’s Chad Moeller, Pittsburgh’s Daryle Ward, and Philadelphia’s David Bell. The last Mets player to hit for the cycle had been John Olerud, who turned the trick on September 11, 1997, also against Montreal.

According to Valent, hitting for the cycle is not so rare. It was his third time. He “did it once in the Florida State League and once while playing for UCLA against rival USC.”8 Valent played one more season in the majors, appearing in 28 games in 2005. His final game was on May 27, 2005. He became a free agent after the 2005 campaign and was signed by the San Diego Padres on January 12, 2006, but was released four months later.