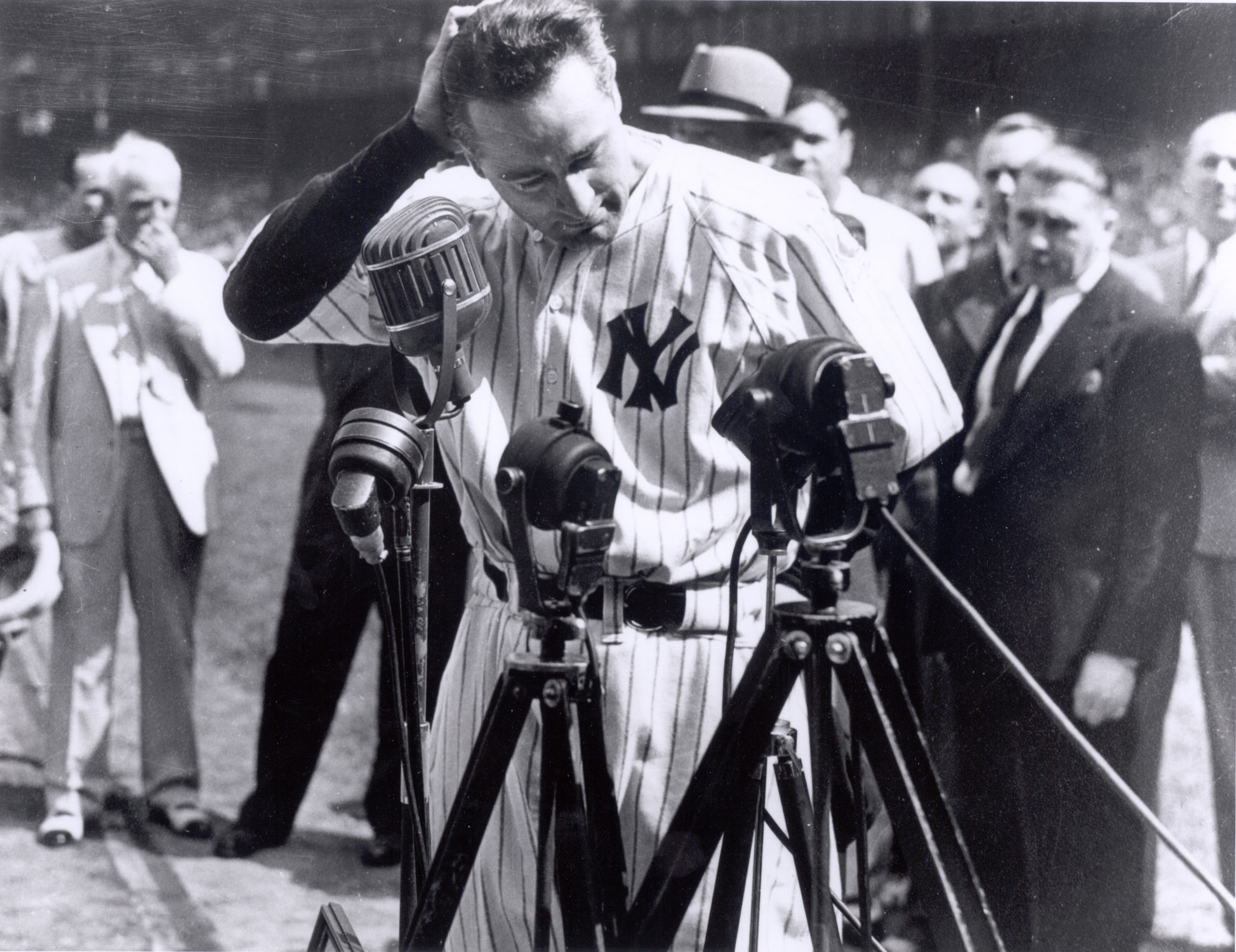 Though both men were amazingly talented on the field, the Yankees’ Home Run Twins couldn’t have been any more different. Babe Ruth was a brash and boorish free spirit who had a casual and often defiant way of dealing with authority. He was also fun-loving and charismatic, with an ego that craved the spotlight. By contrast, Lou Gehrig was modest and reserved, avoiding public attention. He was the consummate company man. Given these differences, it seemed unlikely that a Ruth-Gehrig relationship beyond the playing field, locker room, and Pullman car would have developed.1 However, a relationship between the two developed and from the very beginning it was complicated.

In the early years, Ruth was a mentor whom Gehrig idolized. Columbia Lou never believed that he could be Ruth’s equal. “The only real home run hitter that has ever lived,” Gehrig once said in reference to Ruth. “I’m fortunate to be even close to him.”2 The two developed a close relationship. Sharing confidences, eating, traveling and barnstorming together, playing cards, swapping batting tips, fishing and golfing together, Ruth and Gehrig should have grown closer with the passing years.3 Instead they grew apart and the relationship entered a period of estrangement, when both men refused to speak to each other. The relationship came full circle on July 4, 1939, when Ruth ended their long antagonism by impulsively putting his arm around Gehrig and hugging him during a ceremony to honor his estranged friend.4

The Independence Day doubleheader pitted the sixth-place Washington Senators, who entered play with a 28-42 record, 24½ games off the pace, and the three-time defending World Series champion New York Yankees, who were 51-16, 12½ games clear of the second-place Boston Red Sox. The games were overshadowed by the ceremony that took place between games. It was Lou Gehrig Appreciation Day and 61,808 fans jammed the House that Ruth Built to pay homage to the ailing Yankees star, who was dying from amyotrophic lateral sclerosis (ALS).5

While Gehrig dressed in the clubhouse, some of his old teammates dropped in to say hello, including Mark Koenig, Wally Schang, Herb Pennock, Wally Pipp, Bob Shawkey, Benny Bengough, George Pipgras. Tony Lazzeri, Earle Combs, Joe Dugan, Waite Hoyt, Bob Meusel, Everett Scott, and Wally Pipp, who faded away as the Yankees’ first baseman the day Gehrig took the job back in 1925.6 Ruth had yet to arrive and everyone wondered whether the Bambino would show up.

In the opener, the Senators scored two first-inning runs in support of right-hander Dutch Leonard (8-2), who limited the Yankees to six hits and helped his own cause with a sixth-inning RBI single. Right-hander Monte Pearson (7-2) suffered the loss for Yankees, who managed a single run in the third and another in the ninth on a one-out home run by right fielder George Selkirk as the Senators hung on for a 3-2 victory.

Ruth arrived in plenty of time for the ceremony wearing a cream-colored suit and looking tanned and rested. By the late 1930s Ruth had ballooned to 270 pounds and was beginning to experience some health problems of his own.7 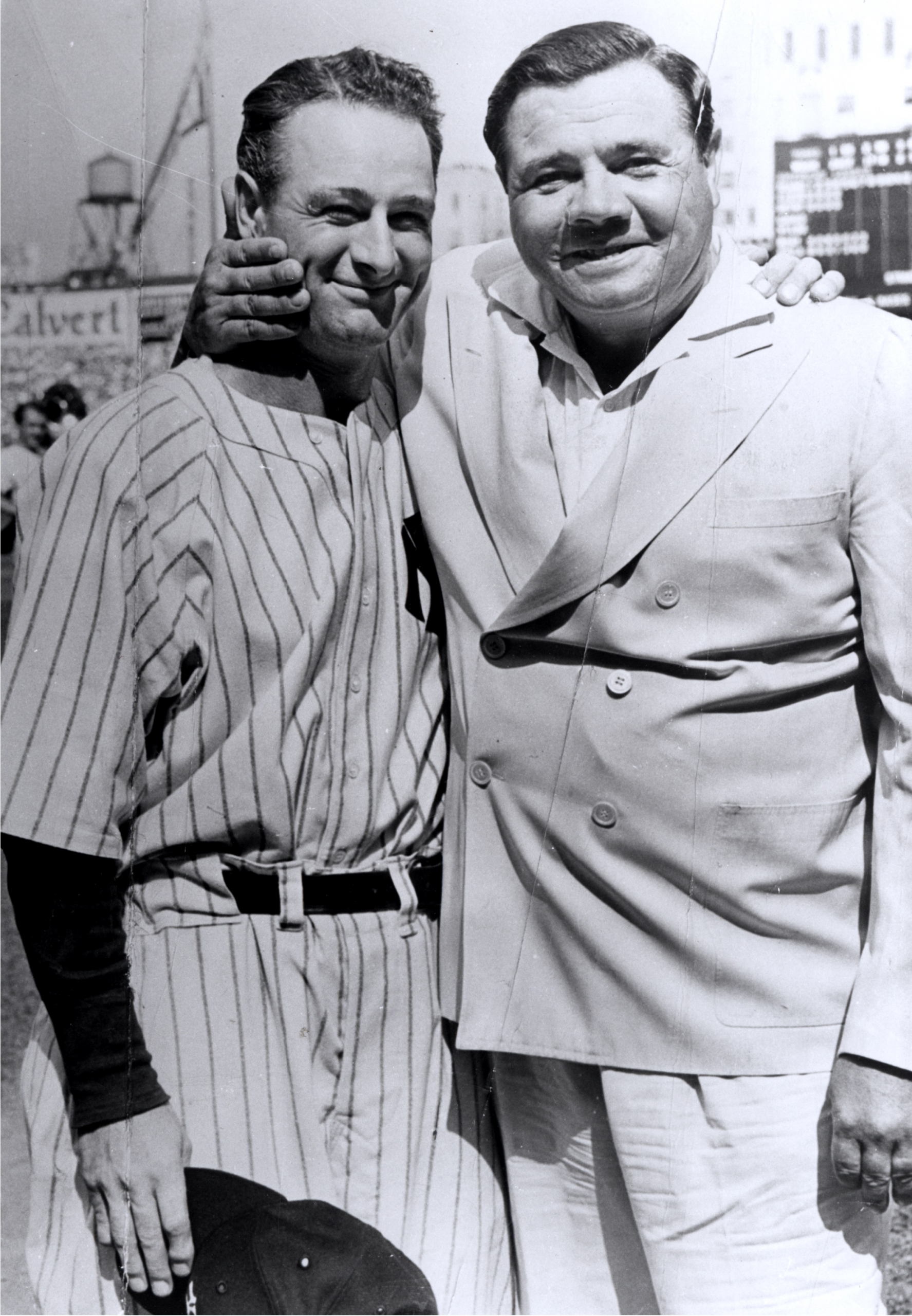 Between games, a group of microphones were set up behind home plate for the ceremony. Sid Mercer, dean of beat reporters covering the Yankees, served as emcee for the event. New York Mayor Fiorello La Guardia officially extended the city’s appreciation of the service Gehrig had given to his hometown. The mayor praised Gehrig as “the greatest prototype of good sportsmanship and citizenship.”8 Postmaster General James Farley, also in attendance, concluded his remarks with “for generations to come, boys who play baseball will point with pride to your record.”9

Ruth then took a turn at the microphone. Though their relationship had been troubled, Ruth never held a grudge and seemed happy to be reunited with his old friend. In his own blustering style, Ruth gave his unqualified opinion that the 1927 Yankees were better than the 1939 edition. Summarizing his belief, Ruth said, “In 1927 Lou was with us, and I say that was the greatest ball club the Yankees ever had.10 The Sultan of Swat continued, “Anyway, that’s my opinion and while Lazzeri here pointed out to me that there are only about 13 or 14 of us here, my answer is, shucks, we only need nine to beat ’em.”11

Mercer then introduced Gehrig to the huge throng in attendance and millions listening on radios across the country. Head bowed, Gehrig stood silent until he privately whispered something to Mercer, who returned to the microphone and told the crowd and listening audience, “Lou has asked me to thank you all for him. He is too moved to speak.”12 The response to Mercer’s remark were chants of “We want Gehrig!” throughout the ballpark.13

As the chants continued, Gehrig took a handkerchief from his pocket, wiped away his tears and moved toward the microphones once again. Head bowed, he spoke slowly and evenly as he delivered the most memorable farewell speech in baseball history.

“Fans, for the past two weeks you have been reading about the bad break I got. Yet today I consider myself the luckiest man on the face of this earth. I have been in ballparks for seventeen years and have never received anything but kindness and encouragement from you fans.

“Look at these grand men. Which of you wouldn’t consider it the highlight of his career just to associate with them for even one day? Sure, I’m lucky. Who wouldn’t consider it an honor to have known Jacob Ruppert? Also, the builder of baseball’s greatest empire, Ed Barrow? To have spent six years with that wonderful little fellow, Miller Huggins? Then to have spent the next nine years with that outstanding leader, that smart student of psychology, the best manager in baseball today, Joe McCarthy? Sure, I’m lucky.

“So I close in saying that I may have had a tough break, but I have an awful lot to live for.”14

Ruth was moved to tears by Gehrig’s 277-word speech. The Babe went over to shake his old friend’s hand but hugged him instead — ending the long-standing and petty feud between them. It was the first time Gehrig cracked a smile all day. As they embraced, a tearful Ruth couldn’t have imagined he would be facing a similar crowd under very similar circumstances less than a decade later.

After the ceremony, Gehrig returned to the clubhouse, where he saw right-hander Steve Sundra, who was slated to start the nightcap for the Yankees. Gehrig went to Sundra and said, “Big Steve, win the second game for me, will ya?”15

Sundra (5-0) delivered a six-hit complete game and the Yankees scored six runs in the first three innings off Venezuelan rookie right-hander Alex Carrasquel (4-6) on their way to an 11-1 victory. Selkirk paced the Yankees’ hitting attack with three hits, including a home run, while second baseman Joe Gordon drove in four for the Yankees. Right fielder Taffy Wright accounted for the Senators’ lone run with a second-inning home run.

On June 2, 1941, Gehrig died at his home. Upon hearing the news of Gehrig’s passing, Ruth and his wife, Claire, were among the first to go to the Gehrig house to console Eleanor Gehrig.16

5 Amyotrophic lateral sclerosis, commonly known as ALS or Lou Gehrig’s disease, is an incurable fatal neuromuscular disease. The disease attacks nerve cells in the brain and spinal cord. Motor neurons, which control the movement of voluntary muscles, deteriorate and eventually die. When the motor neurons die, the brain can no longer initiate and control muscle movement. Because muscles no longer receive the messages they need in order to function, they gradually weaken and deteriorate, resulting in paralysis.

7 Ruth experienced the first of two heart attacks while playing golf in 1939.

15 ’ Pages Out of the Past,” Atlantic City Evening Union, January 18, 1952, as cited by David Skelton, “Steve Sundra,” SABR BioProject, https://sabr.org/bioproj/person/3c2f6fad.