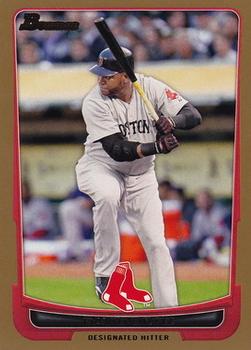 The Oakland Athletics were riding high entering the final game of their three-game series against the visiting Boston Red Sox. After losing 7-2 to the Texas Rangers on June 30, the Athletics won three games in a row to move two games under .500 at 40-42 on Independence Day. The A’s were led by their starting pitching, which had given up two or fewer runs in 17 of their previous 19 games.

Meanwhile, the Red Sox were hoping to avoid a sweep, having won at least one game in each of their series against the Athletics dating back to May 2008. 1 Boston entered the game at 42-39, hoping to return to the playoffs following their collapse of September 2011, when the Red Sox blew a nine-game lead in the wild-card race to the Tampa Bay Rays and missed the postseason. 2

One of the biggest stories entering the game was Red Sox designated hitter David Ortiz’s attempt to hit his 400th career home run. Entering the game, the 36-year-old Ortiz, in his 16th season in the majors, was batting .301 with 21 home runs. He hit his 399th homer on June 27 against the Toronto Blue Jays but entered this game having gone 25 at-bats without a home run. 3 Oakland first baseman Brandon Moss, Ortiz’s former Red Sox teammate, had told Ortiz earlier in the series that while “he prefers Ortiz not hit No. 400 against the A’s, he also would really like it to happen.” 4

Ortiz struck out in his first at-bat against starting pitcher A.J. Griffin, ending the top of the first inning. The game’s first run came in the bottom of the second. Moss, leading off the inning against Boston starting pitcher Aaron Cook, worked a 2-and-2 count before hitting a home run to center field. The home run gave the Athletics home runs in 15 consecutive games, their longest such streak since 2002. 5

Oakland’s 1-0 lead stood until the top of the fourth. Ortiz led off the inning and hit his 400th career home run, down the right-field line. Ortiz became the 49th player in major league history to hit 400 home runs – and the second of 2012, following the Chicago White Sox’ Paul Konerko. 6 The home run tied the game at 1-1.

Ortiz next batted in the top of the sixth with two outs and nobody on. Public-address announcer Dick Callahan acknowledged Ortiz’s milestone on his way to home plate. The crowd of 28,240 gave Ortiz a standing ovation, and Ortiz tipped his cap back. In a postgame interview, he said of the fans’ reaction, “That was pretty cool. … You’re playing on the road, and you get something like that done on the road and people really appreciate it.” 7 Ortiz walked after getting the ovation. The walk was the 1,000th of his career, making him the sixth player to reach the 400-homer and 1.000-walk milestones in the same season. He became the first player to reach both milestones on the same day. 8 Following Ortiz’s walk, Jarrod Saltalamacchia singled. Then Adrian Gonzalez hit a single to score Ortiz, giving the Red Sox a 2-1 lead.

Oakland stuck back in the bottom of the inning. Moss hit a one-out double. Two batters later, Brandon Inge doubled, scoring Moss and tying the game at 2-2.

Red Sox pitcher Cook remained in the game to start the bottom of the seventh, and Oakland’s Coco Crisp led off by hitting a 0-and-2 pitch to right field for a triple. Andrew Miller came in for Cook but allowed a single to the next batter, second baseman Jemile Weeks. Crisp scored to give the Athletics the lead, 3-2.

Miller faced one more batter, getting right fielder Josh Reddick to fly out, before being replaced himself by reliever Matt Albers. Albers faced one batter, getting left fielder Yoenis Céspedes to fly out, before Red Sox manager Bobby Valentine called on the fourth pitcher of the inning, reliever Franklin Morales, to replace Albers. Morales struck out designated hitter Seth Smith, ending the inning.

In the top of the eighth, Athletics reliever Grant Balfour, who had pitched a one-two-three seventh, got the first two outs before being relieved by Jerry Blevins. Blevins struck out Ortiz to end the inning. The Athletics put in Ryan Cook to close out the game in the ninth. Cook induced Saltalamacchia to fly out, Gonzalez to ground out, and Mauro Gomez to fly out to end the game.

Balfour earned the win for the Athletics. Blevins was credited with his sixth hold of the season, and Cook recorded his eighth save.

Cook was charged with the loss for the Red Sox, who were swept by the Athletics. Afterward, Valentine lamented how the loss “tarnished” Ortiz’s accomplishment, saying of the designated hitter, “I wish he could celebrate more. … He knows it’s a great individual accomplishment.” 9

A’s starting pitcher Griffin, who had given up Ortiz’s home run, called it “a great milestone,” adding, “My name will be next to that one.” 10 Griffin, making his third career start, went six innings and allowed two earned runs on just four hits, earning a no-decision.

The Athletics moved to 41-42 with the victory and did not look back. They went 53-26 the rest of the season, ending with a 94-68 record and winning the AL West Division. Their season ended in the Division Series, which they lost in five games to the Detroit Tigers, who went on to win the AL pennant.

For the Red Sox, the game exemplified their season: a strong start with success and accomplishments, followed by a late slide. The loss dropped Boston to 42-40, and they too did not look back, finishing the season 27-53 to end with a record of 69-93. The Red Sox finished in last place in the AL East, their first last-place division finish since 1992. Valentine was fired after one season at the helm. 11

Ortiz’s big day in Oakland turned out to be one of his last thrills of the 2012 season; a strained Achilles tendon limited him to one game after July 16. But he returned strong in 2013, inspiring the Red Sox after the Boston Marathon bombing in April and sparking Boston to the World Series championship with a 30-homer season and a World Series MVP performance. Ortiz retired after the 2016 season with a career total of 541 home runs.

In July 2012, I was 11 years old. My father was retiring from the Air Force, and we were moving from California, where we had lived for the last two years, to South Carolina. One of the last things we did before moving was going to Oakland to see my beloved Red Sox playing the A’s on Independence Day – the first time I ever saw the Red Sox in person. I was excited to see the players I had spent years watching on television. Little did I know I would see history for David Ortiz, who remains to this day my favorite player.

In addition to the sources cited in the Notes, this article relied on the Baseball-Reference.com and Retrosheet.org websites for box scores and important information, and on Bill Nowlin’s SABR Biography Project biography of David Ortiz for background on Ortiz’s career.