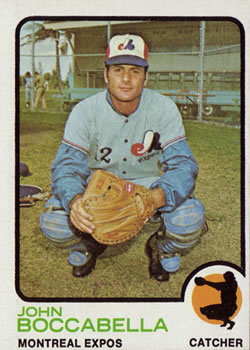 The author of the UPI wire story on the Montreal-Houston doubleheader dismissed him as “an unknown catcher of modest talents,” although John Boccabella was certainly well-known to Expos fans, especially those who attended games at Jarry Park.1 Public address announcer Claude Mouton, emphasizing the musicality of his Italian surname, enthusiastically introduced him as “Johhnnnn Bock-a-belllllla!” each time he stepped to the plate. The fans lapped it up. Boccabella, who was selected by the Expos in the 1968 expansion draft, enjoyed a popularity in Montreal that was disproportionate to his limited offensive abilities. He did yeoman’s work as a backup catcher and first baseman in the franchise’s early years, with occasional stints at third base, and his efforts did not go unnoticed. Expos manager Gene Mauch once described him as “the best utility man in the majors.”2

By 1973, the Expos had several promising young catchers in their system, but none were ready to catch at the major-league level. With the departures of John Bateman and Tim McCarver, “Boc” was the only experienced catcher remaining on the roster, and so Mauch tapped him as Montreal’s primary backstop that spring, making him a starter for the first time in his 10-year big-league career.

The July 6 doubleheader was a matchup between two third-place teams on a warm Friday evening in Montreal. The Astros (46-39), 5 1/2 games behind the Los Angeles Dodgers in the NL West standings, were on the fourth day of a gruelling road trip that had them playing 15 games in 13 days. The Expos (37-40) were 8 1/2 games behind the first-place Chicago Cubs after taking three of four contests from the Mets to start an 11-game homestand.

With the Expos playing their fourth doubleheader in 12 days, Mauch pulled middle reliever John Strohmayer out of the bullpen to start the first game. The 26-year-old right-hander, who was selected by the Expos in the Rule 5 draft in December of 1969, sported a 4.45 ERA in 13 relief appearances and two spot starts. Houston sent their 24-year-old workhorse, left-hander Jerry Reuss (5-8, 3.21 ERA), to the mound.3

The game started off well for the Expos, as Hal Breeden tripled off Reuss with two outs in the bottom of the first inning to bring home center fielder Ron Woods. Their lead didn’t last long. Expo-killer Lee May opened the second inning by slamming a solo home run off Strohmayer for his 22nd career round-tripper against Montreal, and then Reuss helped his own cause by doubling home Tommy Helms later in the inning to give the Astros a 2-1 lead.4

Strohmayer surrendered singles to César Cedeño, Bob Watson and Doug Rader to start the third inning, with the speedy Cedeño scoring on Rader’s base hit. Following an intentional walk to the dangerous May to load the bases, Helms singled home a pair of runs to put Houston up 5-1 and send Strohmayer to the showers after recording only six outs. Young right-hander Tom Walker retired the next three Astros batters to prevent any further damage.

Roger Metzger and Cedeño opened the fourth inning with back-to-back singles off Walker. Both advanced a base on a Watson groundout, and then the pair scored on a base hit by — you guessed it — May to put Houston up 7-1.

The Expos began to chip away at the lead in the bottom of the fourth inning on an RBI single by Clyde Mashore and a sacrifice fly by pinch-hitter Terry Humphrey. Reuss then issued a two-out walk to Ron Hunt to put runners at first and second. Houston manager Leo Durocher, who was in his 24th and final year as a major-league manager, decided to yank Reuss in favor of right-hander Jim Ray. Durocher’s move paid an immediate dividend, as Ray ended the threat by getting Tim Foli to hit into a fielder’s choice. An inning later, Montreal narrowed the score to 7-4 on an RBI single by third baseman Bob Bailey.

The Expos erupted in the bottom of the sixth inning, sending 11 men to the plate. Boccabella led off by taking a Ray offering over the fence for his third home run of the season. Four batters later, Woods came to the plate with only one out and runners on second and third. His groundout scored Boots Day, and then a wild throw from the first baseman May allowed Hunt to scamper home to tie the game. Ron Fairly and Bailey followed with consecutive singles to knock Ray from the game. He was replaced on the mound by 22-year-old rookie left-hander Jim Crawford. Crawford began by walking Ken Singleton to load the bases, and then he ran the count to 3-2 on Mike Jorgensen. Perhaps a bit rattled, Crawford went to his mouth with his pitching hand, causing home plate umpire Doug Harvey to call ball four, which forced in a run and put the Expos up 8-7.

Boccabella stepped to the plate for his second at-bat of the inning, this time with the bases full and Crawford on the hill. He lofted an opposite-field fly ball that cleared the right-field fence for a grand slam, his second home run of the inning. After scoring 11 consecutive runs, Montreal now led 12-7. The stoic Bocabella casually trotted around the bases while the Expos faithful gave him a thunderous standing ovation. “He didn’t even crack a smile,” remarked Day following the game.5 He did, however, tip his cap to the fans to acknowledge their cheers. Asked about this second home run, Boccabella responded with his usual modesty. “It was a fastball,” he said. “I swung late, that’s all.”6

In the top of the eighth inning, the Astros closed the gap to 12-8 on an RBI single by Metzger. With two runners on and only one out, Mauch brought in his “go-to” reliever, Mike Marshall, who was on his way to setting a new major-league record with 92 appearances on the mound that season.7 The rubber-armed Marshall struck out the Astros’ two best hitters, Cedeño and Watson, to escape the jam, and then he tossed a scoreless ninth inning for his league-leading 14th save of the year.

Boccabella became the 18th player and only the second catcher in major-league history to hit two home runs in the same inning. As of the end of the 2018 season, only two other catchers had done it: Andy Seminick (June 2, 1949) and Bengie Molina (May 7, 2007). The consecutive blasts from Boccabella appeared to come out of nowhere, especially since he had only two homers in his previous 306 regular-season at-bats dating back to July 1, 1972. While he displayed minimal power in his big-league career, the outburst should not have been a complete shock to anyone who knew him well, as Boccabella was once a power-hitting prospect who averaged more than 28 home runs per 600 at-bats in the Cubs’ minor-league system.

Surprisingly, it was the second time in less than three months that Houston had given up two home runs in an inning to the same batter, with the hard-luck Crawford serving up the second homer in both instances. The first time that the Astros had suffered the indignity was in the fourth inning of an April 12, 1973 game at Candlestick Park. A veteran New York Times sportswriter, much like his UPI colleague, made a snide remark about Boccabella in his Expos-Astros game report, referring to the previous man to have hit two homers in the same inning as “legitimate slugger, Willie McCovey of the Giants.”8

Over the years, the Expos displayed a peculiar knack for having a hitter club two homers in the same inning. In the team’s brief 36-year history, Expos sluggers turned the trick on five separate occasions: Boccabella (July 6, 1973), Andre Dawson (July 30, 1978 and September 24, 1985), Mike Lansing (May 7, 1997), and Juan Rivera (June 19, 2004). At the time of their relocation to Washington following the 2004 season, an Expo had hit two homers in the same inning more times than players on any other team in major-league history, and the only franchise that could match the Expos was the 122-year-old Giants organization. Fourteen years after their demise, it still holds true that no team in the history of the big leagues has accomplished the feat more times than the Montreal Expos did.9

3 Jerry Reuss tied for the league lead with 40 starts in 1973. He also pitched 279 1/3 innings that season, which was the fourth-most in the National League.

4 The Expos and their fans were relieved when Lee May was traded to the Baltimore Orioles in December of 1974. He posted a 1.007 OPS with 25 home runs in only 257 at-bats against Montreal between 1969 and 1974. He spent his final eight seasons in the American League.

7 Mike Marshall broke his own major-league record by pitching in 106 games for the Los Angeles Dodgers in 1974. That mark remains the MLB record for games pitched in a season (as of the end of the 2018 season).