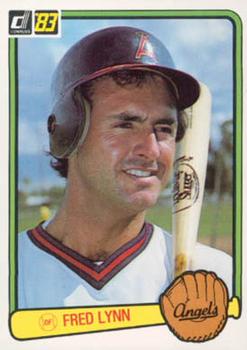 July 6, 1933: the first All-Star Game at Comiskey Park and, in the third inning, the first home run – quite appropriately off the bat of Babe Ruth as part of a 4-2 American League victory.

Fast forward exactly 50 years at the same venue, and another long-ball feat was achieved: The first grand slam in midsummer-classic annals and, to this day, the only one. California Angels outfielder Fred Lynn did it and in the process put the AL’s decade-plus drought to rest.

At a time when the All-Star Game was regarded more as competition than exhibition, there was little in the way of parity. The National League had reigned supreme, experiencing defeat just once since 1963 and having won each game since 1972. Many of the last 11 were close. Yet each ended with the junior circuit being regarded as the lesser of the two leagues.

But in ’83, annual cries of American League inferiority dissipated beneath the reverberation of an incessant power display. Both the 13 runs in the game and the 7 in the third inning set All-Star records, while seven extra-base hits tied another.

The brilliance of the AL offense was preceded by an error-filled opening unbecoming a contest featuring baseball’s premier talent.

Los Angeles Dodgers second baseman Steve Sax led off against Toronto Blue Jays hurler Dave Stieb (10-7), and bounced one to the right side. Stieb, normally a fine fielding pitcher, caught it on the bounce near the first-base line and fired wildly over Rod Carew’s head.

After Sax stole second, Stieb got a much easier chance on a meek grounder to the mound. His throw was accurate, but Carew lost the ball in the setting sun piercing through the Comiskey Park stands. Raines scooted all the way to third as Sax slid into the plate ahead of the tag of catcher Ted Simmons.

Stieb, with 112 strikeouts so far, settled down and limited the damage, impressively fanning Andre Dawson, Dale Murphy, and Mike Schmidt in succession, and went on to spin three hitless frames.

The AL responded against the Cincinnati Reds’ Mario Soto (9-7, 124 K’s). Taking advantage of the NL’s own infield miscues, a pair of sacrifice flies by future Hall of Famers George Brett and Robin Yount put the Americans up 2-1 after two – a small sampling of what was to come in the third.

Atlee Hammaker, a nine-game winner who had allowed only two home runs over the first half of ’83 with the San Francisco Giants, was the unsuspecting casualty of the long-awaited AL vengeance.

The left-hander quickly surrendered a homer to Red Sox slugger Jim Rice. Brett followed with a triple. New York Yankee Dave Winfield singled to pad the advantage. Manny Trillo of the Cleveland Indians followed with a base hit that pushed Winfield into scoring position. With two outs, batting wizard Carew worked his magic wooden wand to generate an RBI single, prolonging the inning and Hammaker’s misery. Trillo advanced to third and Carew moved to second on the throw home.

First base was unoccupied as Yount stepped in. National League manager Whitey Herzog elected to give a free pass to the 1982 AL MVP in favor of a lefty-on-lefty matchup with Lynn. It was rare strategy to employ in an All-Star environment and justifiably raised the ire the of nine-time participant.

“I was pissed they walked Robin Yount intentionally to pitch to me,” said Chicago native Lynn. “That kind of stuff gets me riled up and I’m able to focus all my attention on that particular pitcher.”1

Hammaker got ahead in the count at 1-and-2 before throwing a pitch that might have caught the outside corner, except in the sight and mind of home-plate umpire George Maloney.

On the next offering, there was zero doubt. Lynn parked it into the lower stands beyond the right-field fence and raised his right hand as he rounded first base.

Fred had been an All-Star in each of his big-league seasons with the Red Sox and Angels, but never on a winning side. So to him, the reaction to the grand slam was less a moment of personal satisfaction than of team triumph.

“I never showed emotion like that,” he said. “It had more to do with knowing that we were finally going to win one of these things. We had them on the ropes a few times before and we were long tired of hearing how the National League had the upper hand. It was nice that we didn’t have to hear it again that year.”2

While Lynn entered his name into the history books resoundingly, Hammaker did so dubiously. His six hits and seven runs allowed in a single inning remain (as of 2019) All-Star worsts.

“To put it bluntly, it’s probably the worst exhibition of pitching you’ll ever see,” Hammaker said in a moment of personal reflection. “And I couldn’t have picked a worse spot for it, either – my first All-Star Game in front of all those people.”3

“If you don’t make the pitches against this kind of competition, you’re going to get hurt. I was getting ahead of the hitters the way I wanted to, but I couldn’t put them away.”4

The destruction of the third inning put the NL down 9-1 and in the unfamiliar spot of inevitable defeat. There was little that could be done, but the team did manage to scratch for runs on RBIs by Murphy in the fourth and Sax in the fifth. That was pretty much be the extent of the NL offense.

Over the final four innings, an American League bullpen triumvirate of Bob Stanley, Matt Young, and Dan Quisenberry allowed no NL runner past first base.

The AL bats, on the other hand, still had some retribution to unload.

Lou Whitaker’s seventh-inning triple produced a run and Willie Wilson’s double four batters later added another. More damage was inflicted in the eighth when Brett scored on a muffed fly ball by the Los Angeles Dodgers’ Pedro Guerrero. Milwaukee’s Cecil Cooper made the record 13th tally when he crossed the plate on Rickey Henderson’s groundout.

But there was more than runs for fans to marvel at. In the midst of the late scoring spurt, the Comiskey crowd got a chance to cheer for its own. White Sox outfielder Ron Kittle, a rare rookie-turned-All-Star, beat out an infield hit in the seventh. (He was 1-for-2.)

The evening was a first for Kittle and a last for two Cooperstown shoo-ins. Johnny Bench and Carl Yastrzemski, who each would retire at season’s end, were greeted with rousing ovations during the pregame introductions and their at-bats.

Those moments of individual recognition were the last pieces of significance in a contest sapped of drama once Lynn hit the grand slam. To no one’s surprise, he was unanimously voted the game’s MVP.

When the White Sox hosted the All-Star Game again in 2003, the tables had completely turned. The American League won – prolonging an unbeaten streak that eventually reached 15.

In addition to the sources cited in the Notes, the author also consulted Baseball-Reference.com, Retrosheet.org, and Ultimatemets.com