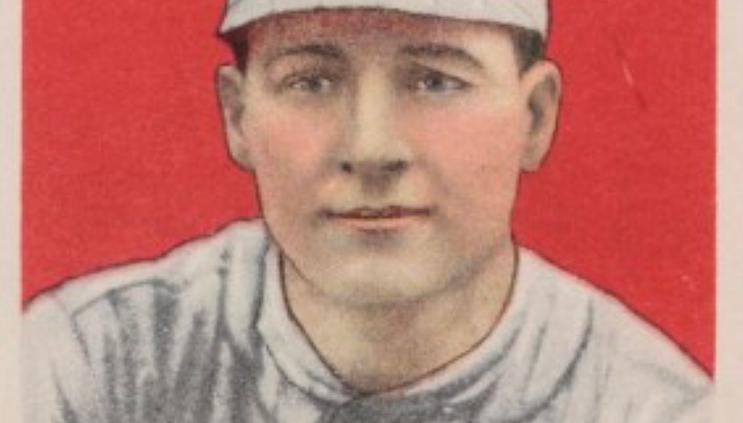 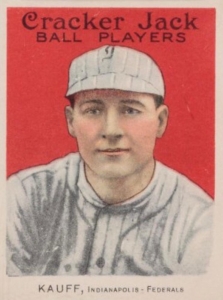 After playing in five games with the New York Yankees in early 1912, Benny Kauff spent the rest of the 1912 season in the minor leagues with the Brockton Shoemakers of the New England League, the Hartford Senators of the Connecticut State League, and the Rochester Hustlers of the International League. In 1913 he was back with Hartford, then in the Eastern Association.

He returned to the major leagues in 1914 with the Indianapolis Hoosiers of the Federal League and except for a brief period in 1920 with the Toronto Maple Leafs of the International League, Kauff would remain a major-league baseball player.

Kauff and his Hoosiers teammates, who included future Hall of Famers Bill McKechnie and Edd Roush, were at home for a three-game series with the St. Louis Terriers, who were led by player-manager Three Finger Brown, another future member of the Baseball Hall of Fame.

On the mound for the Terriers on July 7 was Ed Willett, who was in his ninth major-league season. After winning his first two decisions with the Terriers, Willett lost 12 of 13 decisions and entered the game with a record of 3-12 and a 4.26 ERA. He had last won on June 10, a 13-8 victory over the Pittsburgh Rebels.

Hoosiers manager Bill Phillips chose to start Earl Moseley, in his second year of major-league competition. Mosley entered the contest with a record of 7-8 and a 3.76 ERA.

The Terriers scored two runs in the second inning. Hoosiers shortstop Jimmy Esmond made an errant throw on a groundball by Hughie Miller and Miller reached second base. Al Boucher flied out to right fielder Kauff, but Grover Hartley’s double scored Miller. Hartley advanced to third base on an out by John Misse and scored on a single by catcher Harry Chapman.

Indianapolis got a run back in the bottom of the inning when, after Charlie Carr singled and was picked off first base, Esmond walked and stole second. A single by Al Scheer sent Esmond to third base, where he later scored when second baseman Hartley dropped a throw from catcher Chapman.

The Hoosiers took the lead in the fourth inning when Frank LaPorte walked, moved to second on a sacrifice by Carr, and scored the tying run on a triple by Esmond, who then scored the go-ahead run on a passed ball by catcher Chapman. Scheer walked and Bill Rariden singled, but when they attempted a double steal, Scheer was thrown out at third. The inning ended when Moseley struck out.

Nine Hoosiers batted in the fifth inning, and the team scored three runs.1 Vin Campbell began the inning with a single and was sacrificed to second base by McKechnie. Kauff’s infield single sent Campbell to third base, and he scored on LaPorte’s single. LaPorte went to second base when his hit was fumbled by Ward Miller in left field. Kauff ended up at third, then stole home. LaPorte advanced to third base on Kauff’s steal and scored on a single by Carr. Esmond flied out to Delos Drake in center field. A walk to Scheer and a single by Rariden filled the bases with Hoosiers. Mosley ended the inning when he forced Rariden at second base.

The Hoosiers got their final run of the game in the sixth inning. McKechnie singled and stole second base with one out. After Kauff flied out to center field, LaPorte’s single scored McKechnie.

The Terriers, down 7-2, made it closer in the seventh, scoring two runs. Boucher singled, then scored when Hartley’s single got by left fielder Al Scheer and rolled to the fence. Hartley wound up on third, and scored on an infield out by catcher Chapman. The score was 7-4, and that’s how the game ended.

Hartley had two hits to lead St. Louis on offense while Carr had three of the Hoosiers’ 12 hits. In addition to Carr’s three hits, LaPorte had two hits and two runs scored and catcher Rariden also had two hits. Indianapolis had seven stolen bases. Kauff led the thievery with two steals, his 37th and 38th of the season. McKechnie, LaPorte, Esmond, Scheer, and Rariden each had one.

Willett was the losing pitcher in the game, allowing 12 hits and seven runs (four earned) in six innings. He walked five and struck out three. Ernie Herbert pitched the seventh and eighth. Willett’s major-league tenure ended after the 1915 season, with his career record 102-100 (3.08 ERA).

Moseley got the win for the Hoosiers, going the full nine innings, allowing eight hits and four runs (one earned). He walked one and struck out nine Terriers. Mosely got his harvest of strikeouts in the fourth and fifth innings, striking out Hughie Miller, Boucher, Hartley, Misee, Chapman, and Willett consecutively.2 This performance probably is a record for the Federal League.3 In four of the nine innings he pitched, the Hoosier pitcher set the Terriers down in order.4 He finished the 1914 Federal League season with a career-best 19 wins. In 1915 he pitched for the Newark Pepper. He had a 15-15 record and led the Federal League with a 1.91 ERA. The Cincinnati Reds picked Moseley up after the Federal League folded, and his major-league career ended after the 1916 season. His career record was 49-48 with a 3.01 ERA.

The seven steals by Indianapolis were well short of the modern-era major-league record of 15, set by the New York Highlanders against the St. Louis Browns on September 28, 1911.5 Before the modern era, on April 22, 1890, the Philadelphia Athletics stole 19 bases in a game against the Syracuse Stars.6

Kauff ran afoul of the law in February of 1920 for accepting stolen cars in a used-car business run by himself and his brother. He was acquitted in a trial, but Commissioner Kenesaw Mountain Landis called the verdict a “miscarriage of justice”7 and banned Kauff as a player.8 Kauff became a baseball scout for 22 years and later was a clothing salesman.9

Indianapolis won the 1914 Federal League pennant, finishing the year with a record of 88-65 that placed them 1½ games in front of the Chicago Chi-Feds. The Terriers finished the year in eighth place with a record of 62-89, 25 games behind the first-place Hoosiers.