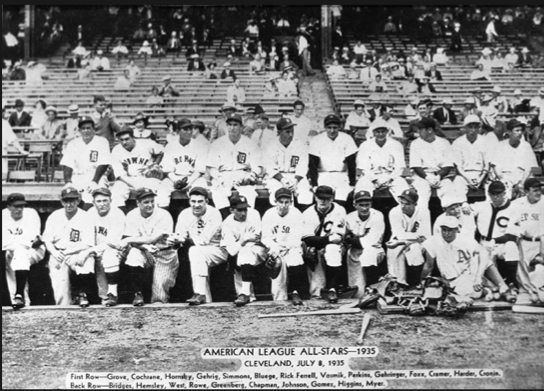 In the first two years of the All-Star Game, fans voted for the two teams’ starting lineups. The 1935 contest, however, brought about a change. The fans were not involved in the process. Instead, the players were picked by the managers of the previous year’s World Series teams. Frankie Frisch of the St. Louis Cardinals chose the National League All-Stars, while Detroit Tigers player-manager Mickey Cochrane had the honors for the American League.

Frisch had recently created some controversy. After an exhibition game on July 5 in St. Paul, Minnesota, he declared that Cardinals ace Dizzy Dean would not start in the All-Star Game on July 8. Apparently Frisch was angry because Dean and his brother Paul Dean had refused to participate in any way in the exhibition game, even as base coaches. When the Deans went so far as to refuse to be introduced to the St. Paul fans, Frisch had seen enough. In the end, Frisch relented, and Dizzy was allowed back on the 20-man NL roster, to be joined by six other Cardinals teammates.

Dean reversed the tables on Frankie Frisch a couple of days later. The train to Cleveland for the All-Star Game made a stop at a small Indiana town. Dean got out on the platform in his stocking feet to sign autographs. He noticed that Frisch was not out doing the same, and called for him to join him on the platform. When Frisch refused, Dean threatened to fine Frisch. He later told the press that he let him off with only a warning.

Charlie Gehringer, who had been the fans’ choice at second base in 1933 and ’34, was selected for the team by Cochrane. Joining him from the Tigers were pitchers Tommy Bridges and Schoolboy Rowe. It was Bridges’ second time as an All-Star; Rowe’s first.

The game was played on Monday, July 8, at Cleveland Municipal Stadium, which had opened for baseball in 1931. Bridges had been the starting pitcher for the Tigers just two days before, but had lasted only two innings against the St. Louis Browns. Rowe had pitched seven innings in relief on July 6, and two on July 7. Cochrane announced that neither would start the All-Star Game, but would be used in relief if needed. Rowe predicted that the game would be a low-scoring affair and that four runs would win the game. Cochrane chose the Yankees’ Lefty Gomez as the AL starter for the third consecutive year, while Frisch named the Cardinals’ Bill Walker to start.

Cochrane had originally wanted to go with Bill Dickey as the American League’s starting catcher. But the Yankee was nursing a leg injury, so Cochrane replaced him with Rollie Hemsley of the St. Louis Browns. Cochrane also picked Rick Ferrell to be a catcher on the AL squad. This gave the American League three receivers, including Cochrane himself. But it was Cochrane’s choices at first base and third base that created a controversy.

Cochrane picked his former teammate Jimmie Foxx as the third baseman and the Yankees’ Lou Gehrig to play first. This was a curious selection, as Foxx had played very little third base for the last five years. In fact, the most he’d played at the position in a season in the previous five years was 26 games in 1931. In 1935 Foxx had played just two games at third. Even more peculiar, Foxx was the only third baseman on the American League roster, and Gehrig was the only first baseman.

Here was the controversy: Cochrane had left Tigers first baseman Hank Greenberg off the team. Greenberg was leading the league in home runs (25) and RBIs (103) at the All-Star break. (He ended the season leading the major leagues with 36 homers and 170 RBIs.) Gehrig at the break had less than half of Greenberg’s totals, 11 homers and 51 RBIs. Some argued that Greenberg had had a bad World Series in 1934 and would probably not respond well in a big game. The flip side of the argument was that Gehrig had gone hitless in his two All-Star Games, in addition to committing the only errors charged to the American League squad in both contests.

Greenberg, however, said he was not upset, as he was sure he would be on the roster in 1936. But as things turned out he was not, because he had a broken wrist. As for Gehrig, he played the entire game at first base for its first five years, even though this was a time when the American League was stacked with first basemen. Besides Gehrig and Greenberg, Jimmie Foxx was the regular first baseman in Philadelphia, and Hal Trosky was a star in Cleveland. All four topped 100 RBIs and slugged over 25 homers in 1935.

Detroiters venturing to Cleveland to take in the game had a couple of travel options. For $5 one could take a ferry from Detroit’s Third Street dock on Saturday, July 6, or Sunday, July 7. After traveling on Lake Erie, passengers arrived at Cleveland’s East Ninth Street pier, which was only a few hundred feet from Municipal Stadium. One could return on Monday, July 8, at 11:30 P.M. and arrive in Detroit on Tuesday at 7 A.M.

And of course, one could always drive to Cleveland. Three Cleveland-bound Detroit fans were killed, along with their chauffeur, south of the Ohio border on Sunday night when their car hit a truck head-on. The driver, described on the front page of the Detroit Free Press as a “new negro” chauffeur, was reportedly speeding. The truck driver and his passenger suffered broken ribs and severe cuts.

The result of the game must have been pleased Schoolboy Rowe, who was correct in his prediction. The American League won, 4-1, before 69,812 fans. Rowe, Bridges, and Cochrane did not play. Gehringer did his typical fine job, going 2-for-3 with a walk. Jimmie Foxx drove in three of the American League’s runs with a home run and a single. Gomez pitched six innings, allowing only three hits, and Mel Harder of Cleveland finished up on the mound.

After the game, many asked for the All-Star vote to be returned to the fans. This did not happen, however, until 1947. As for Lou Gehrig, he went hitless again. Hank Greenberg would not play in an All-Star Game until 1939, the year Gehrig pulled himself out of the Yankee lineup in April, ending his record streak of consecutive games.

This essay was originally published in “Detroit the Unconquerable: The 1935 World Champion Tigers” (SABR, 2014), edited by Scott Ferkovich.