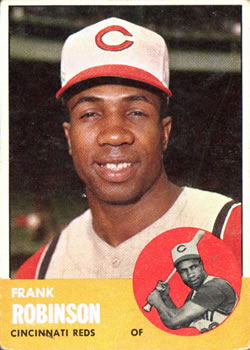 The defending National League champion Cincinnati Reds were languishing in fourth place with a 44-36 record, 9½ games behind the league-leading Los Angeles Dodgers, heading into a July 8 Crosley Field Sunday doubleheader against the expansion Houston Colt .45’s.1 The games would unofficially mark the end of the first half of the season since they would be the last played before the three-day midsummer All-Star break.2

Before a crowd of 18,322, the Reds won the first game of the twin bill in a 12-8 slugfest, bouncing back from an 8-3 fifth-inning deficit that was keyed by Frank Robinson’s grand slam. But the heavy hitting and shoddy pitching for the day had just begun as in the second game the Reds outlasted the Colt .45’s, 12-11 in 13 long innings. It was a game in which the lead changed hands six times, and after the three-hour first game, took 5 hours and 6 minutes to complete.

The weather for the day was hot and dripping with humidity, punctuated by a torrential downpour that delayed the start of the second game by 55 minutes.3 The pitching matchup featured two journeymen, the Reds’ 28-year-old lefty Ted Wills against Houston’s 26-year-old right-hander Jim Golden.4 Neither would be around long. The Reds jumped on Golden in the bottom of the first for three runs with the big blow Gordy Coleman’s two-out, two-run homer over the right-center-field fence.5 The Colt .45’s bounced back in the top of the second for two runs behind Bob Aspromonte’s two-run home run to close the gap to 3-2.

Golden was able to hold the Reds scoreless in the second around two singles but was pulled by Houston manager Harry Craft after allowing a single and a walk to begin the bottom of the third. Hard-throwing right-hander Dave Guisti relieved but walked Coleman to load the bases before giving up a two-run single to Vada Pinson that extended the Reds lead to 5-2 before he retired the side.

Wills couldn’t stand prosperity, quickly surrendering a leadoff homer in the top of the fourth to Norm Larker and a two-run home run off the left-field screen to Yankee castoff Bob Cerv that tied the score, 5-5. With that, Reds manager Freddie Hutchinson had seen enough and waved in the veteran Johnny Klippstein to stem the tide.

But with the score still tied, Klippstein ran into trouble in the fifth, allowing two more runs on a walk and doubles by Roman Mejias and Carl Warwick to shoot Houston into the lead, 7-5. Klippstein was replaced in mid-inning by the lanky Dave Sisler, who retired the next two batters while stranding two runners.

Meanwhile, Guisti had pitched around trouble in the fourth and fifth, holding the Reds scoreless. Sisler wasn’t so fortunate and gave up another run in the sixth on a hit by Guisti, a stolen base by Bob Lillis after a force out, and an RBI single by Mejias that extended the Houston lead to 8-5.

Just when it looked as if the Reds might be facing a doubleheader split, they came roaring back in their sixth with four runs to chase Guisti and retake the lead, 9-8. The big hits were Robinson’s RBI single and Gordy Coleman’s double that drove in two runs to tie the score and chase Guisti. The veteran Don McMahon relieved and promptly gave up the go-ahead run on Pinson’s RBI single.

Sisler had been lifted for a pinch-hitter in the sixth, so best-selling author Jim Brosnan6 came on to try to hold the lead. He, too, was unsuccessful. After retiring the first two batters, Brosnan surrendered Cerv’s second home run of the game, which knotted the score 9-9. McMahon danced around trouble in the Reds’ seventh, managing a scoreless inning when Leo Cardenas was thrown out at home trying to score from second on an infield single.

The upstart Colt .45’s bunched three singles to retake the lead in the top of the eighth against Brosnan. Hutchinson was pulling out all the stops, and with the All-Star break looming, brought in ace starter Joey Jay with the bases loaded and only one out.7 It was a good move as Jay immediately got the Reds out of the inning, inducing Warwick to bounce into a third-to-home-to first double play. The Reds then came right back to tie the game at 10-10 in the bottom half on Frank Robinson’s solo home run against the left-field screen off Turk Farrell, who had come in to pitch to start the inning.

Jay continued to restore order in the top of the ninth, retiring the Colt .45’s on a comebacker and two strikeouts. In the bottom of the inning, Farrell gave up a leadoff single to Hank Foiles, who was forced at second on a botched sacrifice by Leo Cardenas. A wild pitch sent Cardenas all the way to third with one out. But Farrell bore down and left the runner stranded with a strikeout and groundout to second to force extra innings.

Moe Drabowsky took the mound for the Reds in the 10th and managed two outs around two walks and an error which loaded the bases. He escaped the jam when Warwick popped to first base to end the inning. Farrell then set the Reds down in order in the bottom of the inning.

Drabowsky and Farrell continued to exchange goose-eggs in the 11th and 12th innings, each allowing only a single in the two innings. Then in the 13th, young fireballer Jim Maloney, who had pinch-hit for Drabowsky in the 12th, came on to pitch and immediately gave up a single to Norm Larker. Warwick sacrificed pinch-runner Jim Busby to second and Busby then advanced to third on a wild pitch. When Pidge Browne, a lefty swinger, was announced as a pinch-hitter for Jim Pendleton, Hutchinson brought in another starting pitcher, southpaw Jim O’Toole,8 to gain the lefty-lefty matchup. But Browne managed a sacrifice fly deep enough to score Busby and send Houston into the lead for the third time in the game.

After O’Toole retired the Colt .45’s without further damage, Farrell took the mound for his fifth inning of work to try to close out the win.9 But he was out of gas and gave up a leadoff home run to Marty Keough into the center-field corner of the bleachers as the Reds quickly tied the score at 11-all. It was the fifth time in the game they had erased a deficit. Robinson followed with a single for his fourth hit of the game and sixth of the doubleheader. That ended Farrell’s day and brought on lefty Hal Woodeshick, who had shut out the Reds two days before. He immediately dug a deeper hole by firing Coleman’s attempted sacrifice bunt wide of second for an error that put runners on first and second with no outs.10

Pinson then forced Coleman at second on a groundout that moved Robinson to third with the winning run. The Colt .45’s intentionally passed Foiles to load the bases, bringing up Cardenas.  He singled through the drawn-in infield to send Robinson scampering home with the winning run, ending the marathon day at the ballpark with a Reds sweep.11

It was anything but a good day for Houston’s Farrell, who, coming back from 12 days off because of a pulled muscle in his side, lost both games of the doubleheader to fall to 5-10. O’Toole, the last of nine Reds hurlers, was the winner to pull his record to 8-9. The 8 hours and 7 minutes of elapsed playing time set a record for the longest doubleheader in baseball history.12  A record 21 pitchers were used in the doubleheader, and in pulling out the second game the Reds used 23 players, including the nine pitchers. The teams combined for 63 hits, seven short of the record, and 13 home runs.13  Gordy Coleman had five hits in the twin bill, including two home runs and two doubles, and drove in seven runs. Frank Robinson’s day was not too shabby either: He went 6-for-9 with two home runs and a double. He drove in six runs and, amazingly, crossed the plate eight times in the doubleheader. More importantly, the sweep enabled the Reds to gain ground on all the teams ahead of them in the standings and pass the Cardinals into fourth place, 8½ games out of the lead. Although the Reds would make a run at a second pennant in the second half of the season, they would fall short by 3½ games, finishing in third place with a 98-64 record.14

In addition to the sources cited in the Notes, the author consulted Retrosheet.org and BaseballReference.com

1 Houston was in eighth place with a 33-49 but a full 10 games ahead of the New York Mets, its fellow expansion franchise. For an outstanding illustrated history of the Colt .45’s, see Robert Reed, Colt .45s – A Six-Gun Salute (Houston: Lone Star Books, 1999).

5 The Reds might have had more but Marty Keough was thrown out at the plate for the second out while trying to score from first on Frank Robinson’s double to left.

6 Brosnan had authored two “inside” baseball books, The Long Season published in 1960 and The Pennant Race published in 1962. Both were best-sellers and set the stage for Jim Bouton’s Ball Four a few years later.

7 It was one of just two relief appearances of the year for Jay.

8 It was also one of two relief appearances of the year for O’Toole.

9 Farrell had also pitched an inning in the first game.

14 The Dodgers and Giants tied for the pennant with 101-61 records before the Giants won the playoff series, two games to one.