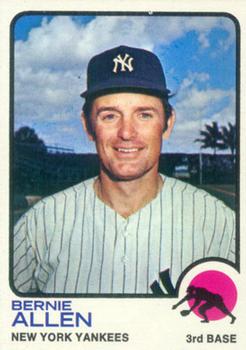 Bernie Allen was well-known in Minnesota, for bad and good reasons to fans in the state.

In 1960 he was the quarterback, kicker, punter, and a defensive back for a Purdue team that upset the Minnesota Gophers and kept them from winning the Big Ten title outright. (The Gophers still tied for the conference championship and were voted college football national champions at the end of the regular season.)

After the game Minnesota fans congratulated Allen as he walked to the Purdue bus. He said that was a reason he chose to sign with the Minnesota Twins rather than take a large bonus from the New York Mets. “I was a quiet kid then, and New York scared the hell out of me. I remembered the Gophers fans and felt Minnesota was a place that I could be comfortable.”1

Allen became the regular second baseman for Minnesota in 1962, playing 159 games and hitting 12 home runs in helping the Twins finish second, five games behind the New York Yankees. In 1964 Allen was injured at second base, tearing ligaments in his knee. He said he sought his own surgeon, who repaired his knee, a procedure Minnesota owner Calvin Griffith didn’t sanction. Griffith paid for the surgery but, according to Allen, cut his salary by a corresponding amount before the next season.2

“I liked everything about Minnesota except Calvin,” said Allen. “In fact, he’s the reason I was a player representative later in my career. I was there for Marvin Miller’s first union meeting.”3

The surgery allowed Allen to play for nine more seasons and gave him the chance to be around long enough to vex Griffith one more time.

It was Saturday, July 8, 1972, a day when it looked as though no baseball would be played. The matchup of aces Mel Stottlemyre of the Yankees and Bert Blyleven of the Twins was enough to keep most fans hanging around Metropolitan Stadium even though the start of the game was delayed 2 hours and 7 minutes by rain.

By 1972 Allen was a Yankee, having been traded in December 1966 to the Washington Senators and then in December 1971 by the Texas Rangers to the Yankees.

During the rain New York pitcher Mike Kekich walked down the left-field line and began running wind sprints toward center field. A bored bunch of Knothole Day kids found some amusement by jeering Kekich. Kekich responded by completing one of his sprints with a belly flop and slide on the wet grass. The jeers turned to cheers and got louder when Kekich repeated the stunt, this time by stroking his arms as though he were swimming on the turf. As Kekich walked back to the foul line, he stopped in front of the bleachers and led one section against another in trying to produce the loudest cheers. For years after, Twins announcer Herb Carneal said he always had a soft spot in his heart for Kekich because of the entertainment he provided for the young fans.4

The entertainment finally moved to the pitcher’s mound when the rain let up. Neither team could break through although both had chances.

Roy White of the Yankees doubled with two out in the top of the fourth. After a walk to Ron Blomberg, Allen hit a low liner to the right side. Rod Carew moved left from his second-base position and snared the ball for the final out.

In the last of the fifth, the Twins’ Charlie Manuel and Bobby Darwin led off with singles. Eric Soderholm forced Darwin at second as Manuel moved to third. Stottlemyre got out of the jam by striking out George Mitterwald and getting Blyleven to foul out to Rusty Torres in right.

The Yankees produced their best chances in the later innings. White led off the seventh with a bunt single through Carew and went to third when Blomberg lined a single off Harmon Killebrew’s glove at first. Allen struck out, and Celerino Sanchez walked to load the bases. Jerry Kenney went down swinging for the second out and Stottlemyre grounded Blyleven’s next pitch up the middle. Shortstop Danny Thompson dived, gloved the ball behind second base, and flipped to Carew to force Sanchez.

Blyleven put down the top of the New York order in the eighth but got in trouble again when he walked White to start the ninth. Blomberg was rung up by plate umpire Bill Kunkel (a former Yankees pitcher), but White was off on a 0-and-1 pitch to Allen, who poked a single through the vacated spot at short, sending White to third. Sanchez grounded to Eric Soderholm at third, and White got caught in a rundown as he tried to come home. Felipe Alou hit for Kenney and struck out.

No longer wanting to rely on his mates to produce a run, Stottlemyre lined a double to left-center to lead off the 10th, and Torres walked. Thurman Munson was called out on strikes and Bobby Murcer forced Torres at second. Blyleven then issued his sixth walk of the game, to White to load the bases, and fell behind 2-and-0 to Blomberg, who then hit a grounder to right. Carew went well to his left to field it and threw to Blyleven covering to get the right-hander out of another inning.

Rich Reese hit for Blyleven with one out in the last of the 10th and singled, but Cesar Tovar grounded into a double play, sending the game into the 11th.

Allen was the first batter in the 11th inning, against Wayne Granger, and the count reached 2-and-2 before Allen got under an inside sinker and sent it into the right-field seats. “It might have been a ball,” he said, “but I had two strikes on me and couldn’t afford to take a chance.”5

As Allen watched the ball sail out, he tripped over first base and sprawled face-first into the ground. Allen got up and continued his journey around the bases for the only run of the game. “That’s how I used to avoid big linemen at Purdue,” Allen said. “Duck under them.”6

In the days when starters were often completers, Stottlemyre took the mound in the bottom of the 11th even though he had already delivered 132 pitches. Only after he gave up a single to Thompson, the first batter in the inning, did manager Ralph Houk signal to the bullpen for Sparky Lyle. Lyle had been fantastic for the Yankees after coming to New York in a late spring training tradetrade with Boston. Coming into the Minnesota game with an earned-run average of 0.91 over 49⅓ innings, Lyle was a fireman who often pitched more than three innings when it was necessary.

Houk didn’t consider using Lyle until Thompson’s leadoff single. Lyle needed only nine pitches to lock down the win, getting Carew on a comebacker as Thompson went to second and striking out Killebrew and pinch-hitter Steve Brye.

Whether disappointed or elated by the outcome, those who stayed through the delay and more than three hours of play had seen a great contest. Harmon Killebrew summed it up: “That’s the kind of game where both pitchers should get a win.”7

The author’s scorebook contains the the account of the game. Baseball-reference.com and Retrosheet.org were used to determine Sparky Lyle’s ERA and innings coming into the game.