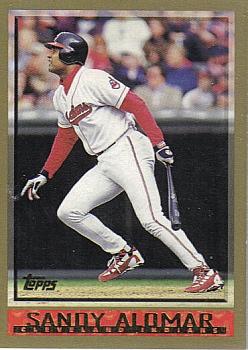 As the 1997 All-Star break came into view, Sandy Alomar Jr. was already having himself a fine year in the first half of the season. Alomar hit a home run in five consecutive games from April 4 to 8 to tie a club mark set by both Larry Doby (1954) and Al Rosen (1953 and 1954). Currently, Alomar was in the midst of a 30-game hitting streak that began on May 25 and was temporarily suspended due to the break in the season. He was batting a league-leading .375 with 11 home runs and 45 RBIs. It was not much of a surprise when New York Yankees manager Joe Torre, the skipper of the AL squad, added Alomar to the American League roster as a backup to Ivan Rodriguez. It would be Alomar’s fifth selection to the AL squad.

The 68th midsummer classic would be played at Alomar’s home ballpark, Jacobs Field in Cleveland. Teammate Jim Thome, who was selected to replace injured teammate David Justice, would be joining Alomar. Indians manager Mike Hargrove was serving as a coach on Torre’s staff. As a team, the Tribe had won five of six as they headed into the break and sat in first place in the American League Central Division. But their lead was just 3½ games over the Chicago White Sox.

Johnson provided some comic relief in the top of the second inning when his former teammate from Montreal, Larry Walker, stepped into the batter’s box. Walker, a left-handed batter, was now a member of the Colorado Rockies. Johnson, a left-handed hurler, threw his first pitch clear over the head of Walker and to the backstop. “It was humid,” said Johnson. “The ball just slipped out of my hand. I guess it was kind of apropos that it slipped while Larry Walker was up. A hitter has to accept terror as a pitcher’s legitimate weapon.”1 Walker retreated to the right side of the batter’s box with a faint smile on his face, much to the delight of the other players and fans. After one pitch, Walker returned to his initial spot, and took a walk off Johnson. “It was a spur-of-the-moment thing. I just thought it would be fun,” said Walker.2

Maddux was tagged with the first run of the game when Seattle’s Edgar Martinez smashed a solo home run in the bottom of the second inning. Martinez, who was the first designated hitter elected to the All-Star Game, sent the 2-and-2 offering from Maddux over the left-field wall.

Atlanta’s Javy Lopez replaced Mike Piazza at catcher for the National League in the bottom of the fourth inning. Lopez came to the plate in the top of the seventh for his first All-Star Game at-bat. On the mound was Kansas City’s Jose Rosado. The southpaw hurler was also making his first appearance in the midsummer classic. Lopez won the battle, as he unloaded a solo home run to knot the score at 1-1. Lopez became the 11th player to hit a home run in his first at-bat in an All-Star Game.

In the bottom of the seventh inning, Shawn Estes of San Francisco took the mound for the NL. Thome led off and grounded out to short. The Yankees’ Bernie Williams stepped to the plate and worked Estes for a walk. Seattle’s Joey Cora flied to left field for the second out. With Alomar at the plate, Estes uncorked a wild pitch and Williams moved up to second base. “When Sandy went to the plate,” said Hargrove, “Paul O’Neill turned to me and said ‘If all things were fair, Sandy would hit a homer to win the ballgame.’”3 O’Neil’s words were prophetic, as Alomar hit a 2-and-2 changeup from Estes on a line to the left-field bleachers for a two-run homer and a 3-1 lead.

The final score was 3-1 in favor of the AL, which snapped a three-game losing streak. Rosado was credited with the win, while Estes took the loss. The Yankees’ Mariano Rivera pitched a 1-2-3 ninth inning for the save. The NL was held to a total of three hits

“This is a dream I don’t want to wake up from,” said Alomar. “You probably only get one chance to play an All-Star Game in your home stadium.”6

“It was another of those storybook things,” said Torre. “I had one last fall, and now this. I was happy for Sandy to win it in his own park.”7

The Indians resumed their second half at Minnesota on July 10. Alomar was looking to extend his 30-game hitting streak. He was one game short of the franchise record held by Napoleon Lajoie in 1906. But he was unable to do so, taking an 0-for-4 collar.

But as usual, Alomar was class all the way after it ended. “I'm happy I got to ride this for as long as I did,” he said. “I enjoyed it, and I think my teammates did. I want to thank them and the staff for all the encouragement they gave me.”8